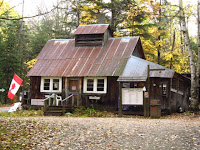 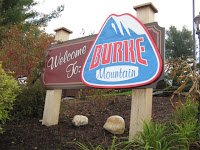 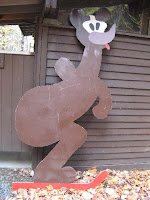 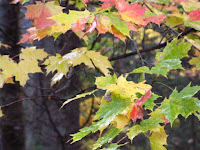 So we celebrated Eric's birthday this weekend by driving up to Vermont. We camped out at the Burke Mountain campground, and had heard that the weather was supposed to be very cold and snowy. However, by Thursday the weather report had improved so we decided to give it a shot. It was beautiful! The leaves were so vibrant, and the air crisp. We hiked on Saturday and on Sunday took the long way home, driving all the way through the state. We can literally say we have seen Vermont in it's entirety. And we'd love to go back!
It did snow, by the way, but it was on Sunday morning as we were packing up. Here are some photos I took around the campsite. The store sells camp gear, and I have no idea if that cut-out is a bear or some other animal, but it is being stored in front of the bathrooms until ski season!
Posted by Chelsi Ritter at 5:42 PM

how fun - looks like you had a great time. let's chat soon about nyc - i've been looking into accomodations.

Why are my pockets always seemingly empty? If only I could find the money to fly out there before Braxton turns two and we have to pay for him. Thanks for sharing your life it looks like a great one!

You have no idea how much I miss fall in the East!

You can go back next summer when our ward campout is at Camp Joseph in Sharon! It's so much fun and in a beautiful spot!