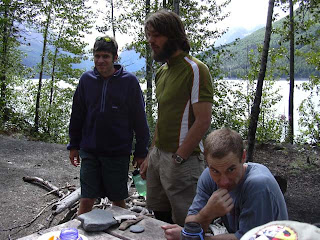 Pretty hairy, huh? (Eric's the one in the middle). I think this is the hairiest he's ever been. Of course, we were living in Alaska at the time, and what man doesn't want to be scruffy while living in America's last frontier? I didn't realize when we were dating just how long Eric would let things go, but I think 8 months is the record. Sorry but this photo is just too hilarious. 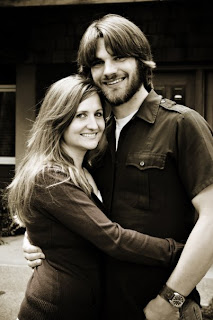 Here's us a little earlier on in the summer (my cousin Bethany took this photo - she's very talented and there's a link to her blog on mine). He was hairy at this point, but little did I know that he would let his hair and beard keep growing. He ended up cutting his hair and shaving for me as an anniversary present, and I have to admit I had missed his face! 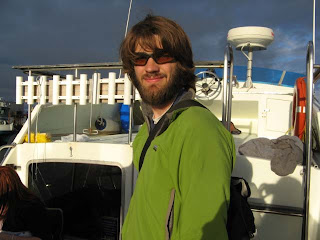 While we were in Alaska this past summer Eric and I both ran in a race in Anchorage. While Eric was running people on the sides would cheer him on, and someone yelled, "Go mountain man!" We thought it was pretty funny. On another occasion Eric was hiking and there was a 4 year old in the group. Eric was wearing his favorite jacket, a bright green soft shell. The 4 year old looked up at him and called him Shaggy from Scooby Doo. What do you think? There's definitely a resemblance, wouldn't you say? 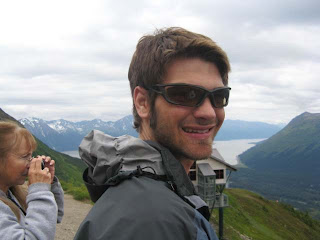 He's actually almost all shaved now, but I have to say I don't mind the beard. Sure, it can get scratchy at times, but I love my mountain man beard or no beard. He shaved the other day, and it's actually taken me a while to get used to it.
Posted by Chelsi Ritter at 4:58 PM

My three brothers used to have "beard contests" and they were pretty pathetic! None of them would have been named "mountain man"!

I like the black and white picture of the two of you. Very Cute.

Eric!!! I miss your hairy man face. I am so freakin jealous!

Yeah, I remember Eric was always pushing the limits at the Y. He's been waiting for this all his life I expect...

Is it bad that part of the reason I'm excited for my hubby to take paternity leave is so he can grow his beard back for a while? He had one through a good part of undergrad and for most of law school...I miss it!

That is very funny. I have to say if you can grow it then do it!

I like the "5 o'clock shadow" look on him in the last photo... although that's technically a bit more than a 5-o-shadow. He has a very distinguished chin! :) But really he pulls off every hairy stage so well!! Way to go Eric!! And can you believe I'm the 8th person to comment on your chin hair? How does that make you feel? :)

Jenn won't let me grow a beard, but I hate to shave, so I usually wait two or three days before hacking up my face.

P.S. Amazingly my favorite book is "Where the Red Fern Grows." Check it: http://whateye.blogspot.com/