We Should Have Stuck to Our Guns..... 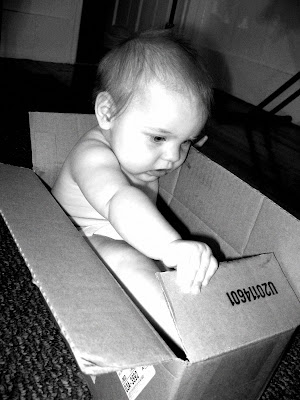 When Aspen was born Eric swore that the only toys she would ever own would be sticks and rocks. After all, that's the best part of growing up, right? The times you were outside making fishing poles with sticks, or throwing rocks at other kids' heads....hmmm....ok, maybe rocks aren't the best idea. Anyway, Aspen's grandparents felt bad for her, and offered to buy her some toys. After much pleading we relented, and she received some. She likes them alright, but the other day she found this box and was in heaven; entertained for 30 minutes at least. It was great! I guess Eric was right. Now what do we do with all her toys?
Posted by Chelsi Ritter at 5:31 PM

i totally agree about the toy thing. the best memories of my childhood are when we were making up games and exploring and making forts out of our couch cushions. i think kids these days have way too many toys and that it sometimes stifles their imaginations.

the only toy i ever really loved that much was my hot wheels, and even then i was outside pretending i was in a car, going somewhere cool. the funnest thing a kid has is their imagination!

I think you guys are so good to want your kids to just play with common things, because in all reality with having two kids they always end up playing with something that didn't cost me anything or if it did it was very little. I try and stick to practical toys..."fake food" (when they get older of course), magnets and magnet boards, cardboard blocks (they love those), Left over boxes...(you've already figured this one out..and let me tell you it works for all ages), Books....can't emphisize books enough...get them reading early they will always love it! And it's not to early! You guys look like you are pro's at this parenting thing already!

love it, you guys are great! Hope your last year out yonder isn't dragging on too long.

Isn't it funny how they can have a bunch of toys sitting around but the one thing they want to play with is far from what we would consider a toy? Lily LOVES coming into the kitchen while I'm cooking. She grabs utensils out of the drawer, finds a pot and gets to work stirring things together (usually animal crackers or cereal). The only toys she seems to care about are her horse, baby doll and her massive pile of books (if those can even count as toys).

I love it! Nothing quite like a cardboard box to provide hours and hours of entertainment!

Oddly enough it seems like kids cycle through that toys anyway. If you don't make them all available all the time maybe she will like them. That is funny though.

I love that picture! It's so cute!! Jesse and I have already said that for xmas this year, Darian is only getting tissue paper, bows, and boxes! She loves that stuff!

I think playing with rocks is great...if you need any for Aspen, I know where to find some.