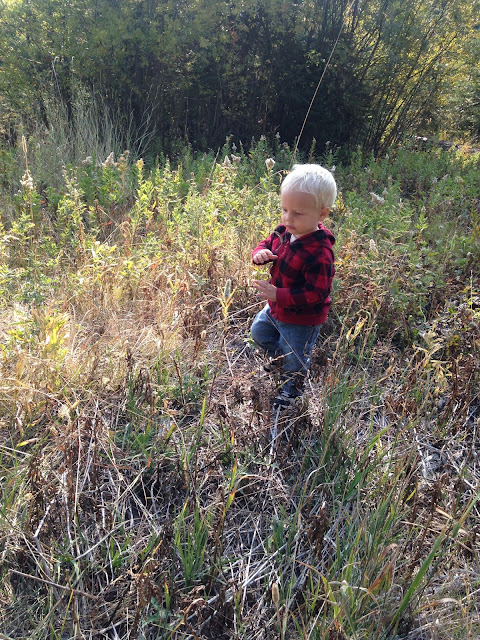 September was a busy month for us.  We had 3 races happen in 3 weeks:  Eric and Pete mountain biked the Gravel Grinder in Cascade, my family and I ran a 5k in Provo, and the last week I ran the FitOne in Boise. 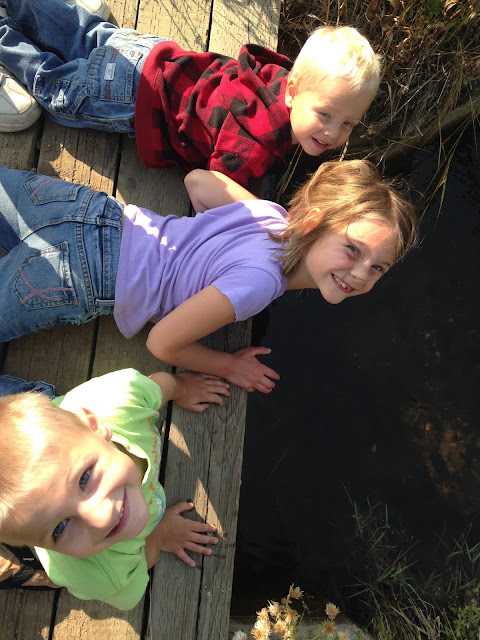 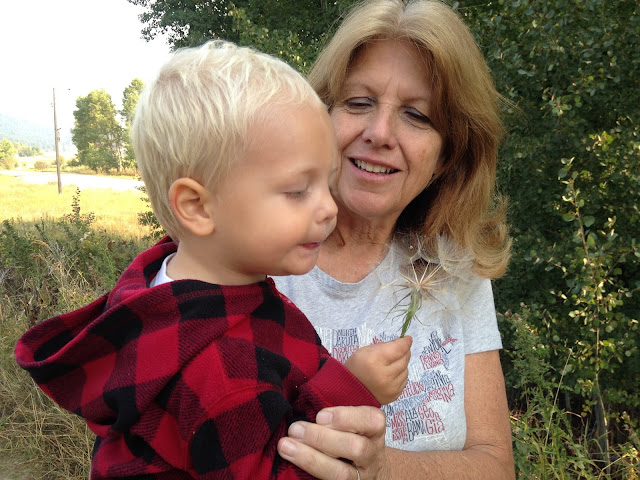 The Gravel Grinder is an 84 mile race.  I really don't know how Eric and his dad did it.  They were on their bikes for 8 hours straight, in the heat.  Meanwhile, Ami, Mary, the kids and I hung out at the cabin and then went for a walk.  We had a fun time watching Birch try to blow dandelions, which basically consisted of him spitting all over the place.  But he didn't back down for a while....then resorted to pulling instead. 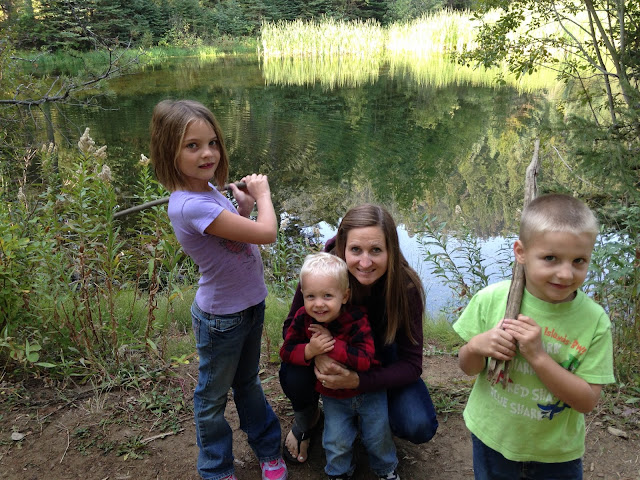 The kids and I; not sure why Aspen looks as if she's about to hit me on the head.  :) 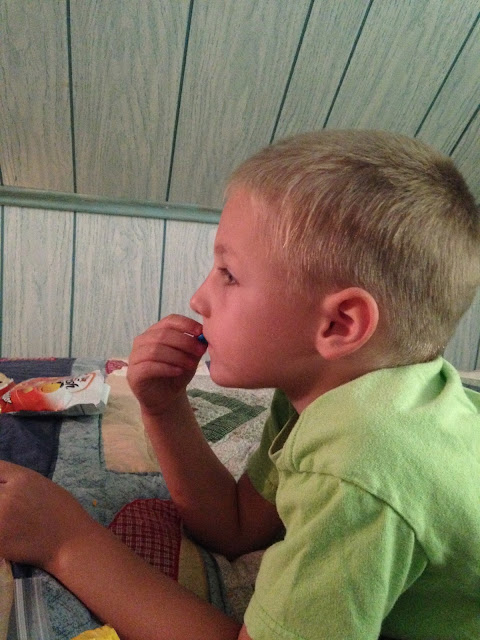 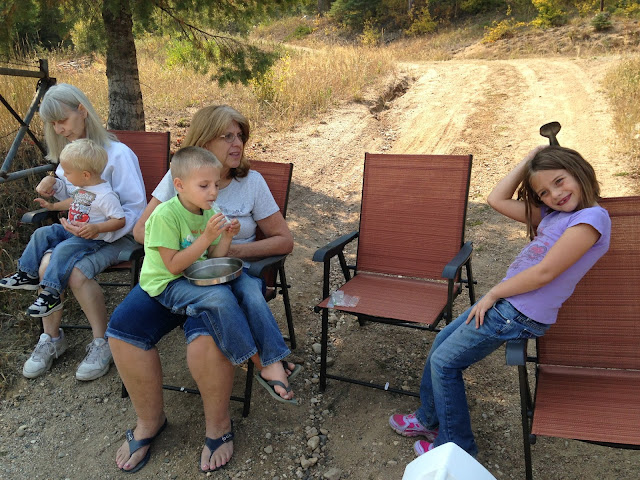 The race course just happened to run right in front of the cabin, so we hung out for a while by the road, waiting and handing out otter pops to the riders.  Unfortunately we didn't get many takers so the kids ended up eating most of them. 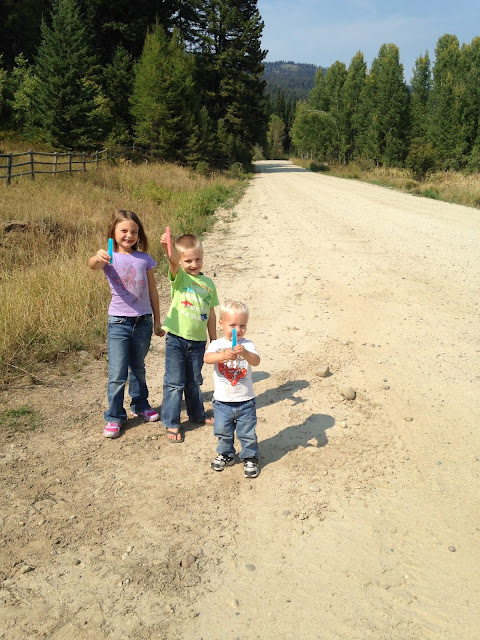 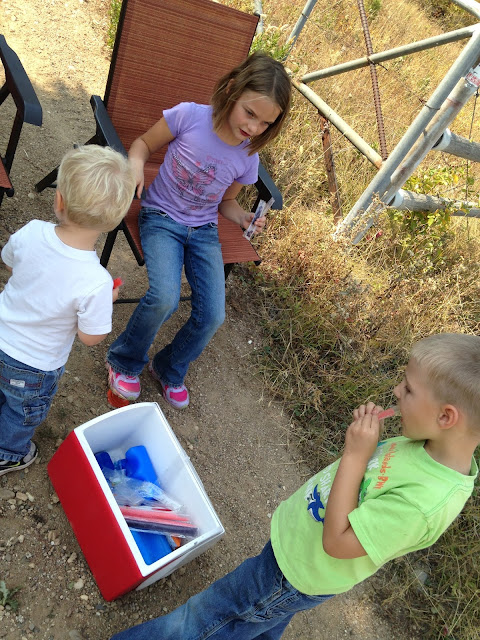 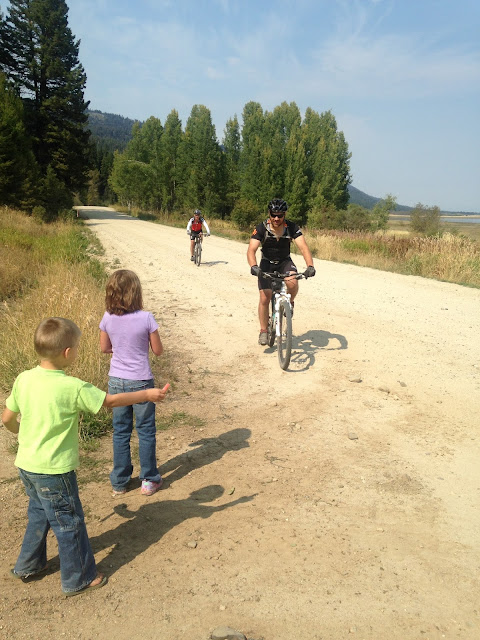 Then Eric and Pete rode by, and after taking a moment to rest they pedaled away while we drove to meet them at the finish line.  They were amazing!! 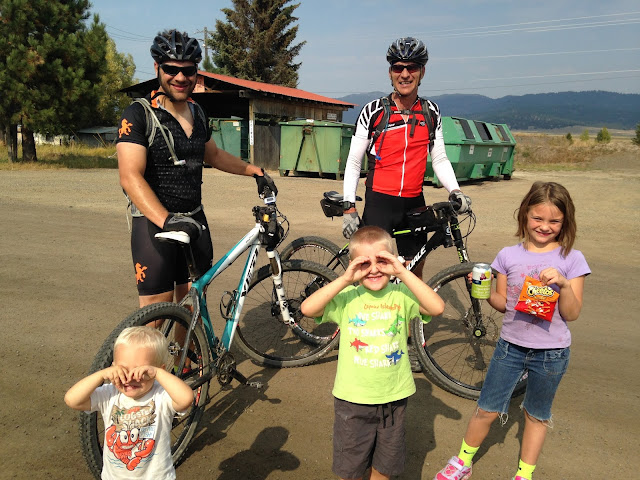 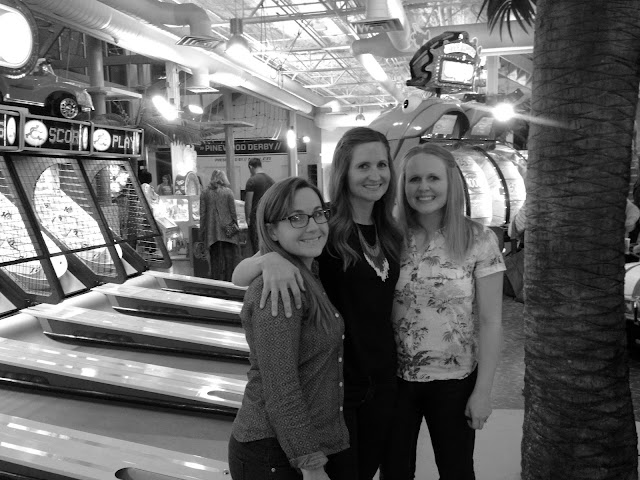 The following week I flew out to Salt Lake.  Dad and Lisa flew out too, and we met up with the girls Friday night for some pasta dinner and fun.  Sasha had mentioned months ago wanting to train for a 5k, and asked if anyone would do it with her.  Dad, Lisa, Demri and I jumped on board and the day had finally arrived.  I was so pumped, so excited.  It was everyone else's first race, and I was so grateful to experience it with them.  I was so impressed with how much they had trained, and just wanted them to love every moment of the race.
I love races!  The excitement, the nerves, the adrenaline....so many people running for the same cause, and all wanting to reach a fitness goal.  There's nothing like it.  I wanted everyone to feel the same way I do about them, and want to do another. 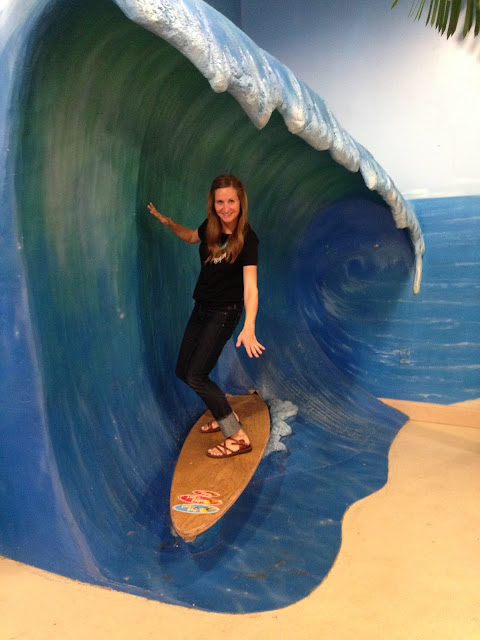 Playing around the night before.  Not sure why so many of my photos turned out blurry!  Argh.
A couple weeks ago Sasha called me to tell me she had the running bug.  She had been running for a while, pushing herself to reach her goals, but not loving it.  Then a few days before the moment came when while out for a run, she really started enjoying herself, and began to feel as if she could keep running for a long time.  Then after that she doubled her distance for her runs!  Those words made me so happy.  Two of my favorite things coming together: Sasha, and running. 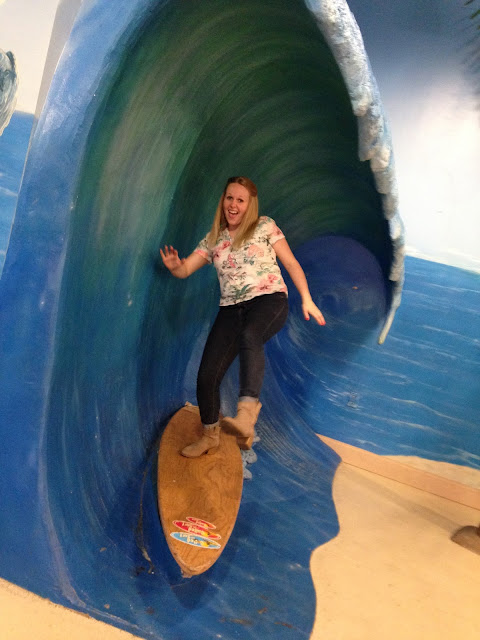 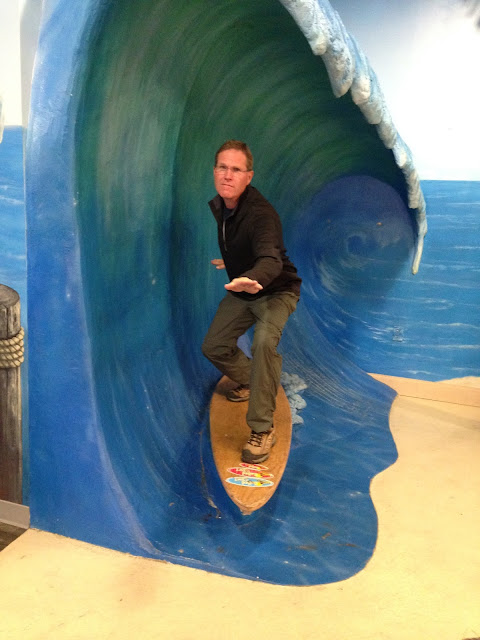 Then Dad told me a few days later that he had had the same kind of experience.  Things were just getting better and better. 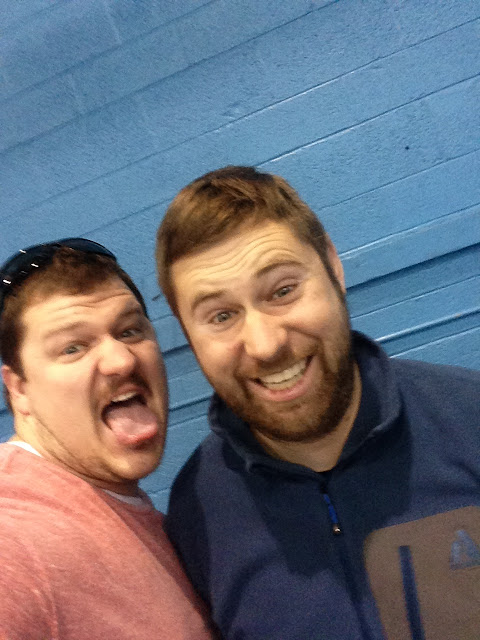 And now the moment had come!  We had our cheerleaders and photographers (above), who were awesome.  Mom came too before the race, and was there to congratulate us at the end. 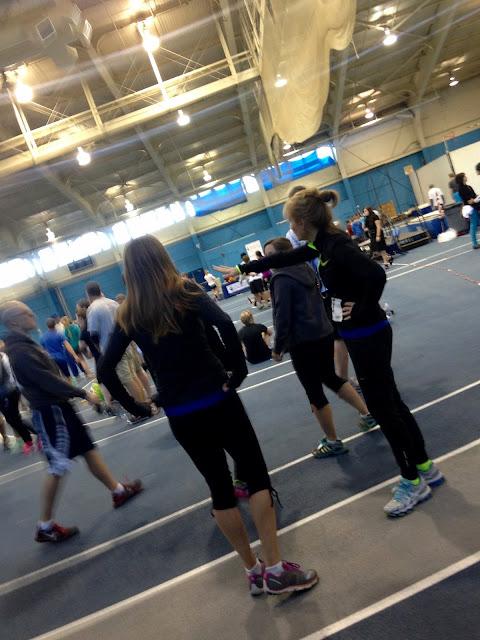 just before.  do we take off our jackets or leave them on?? 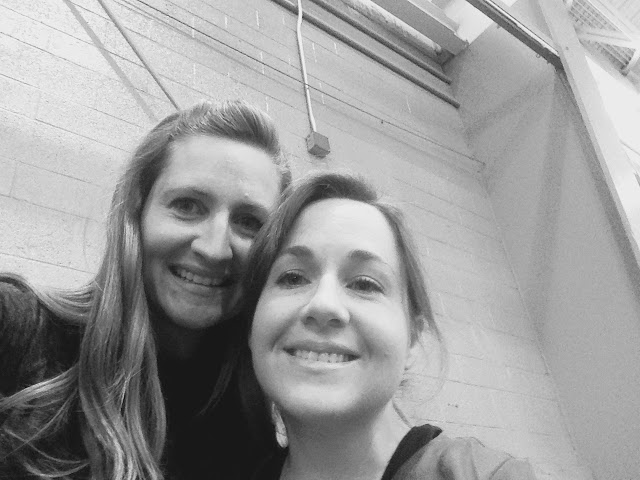 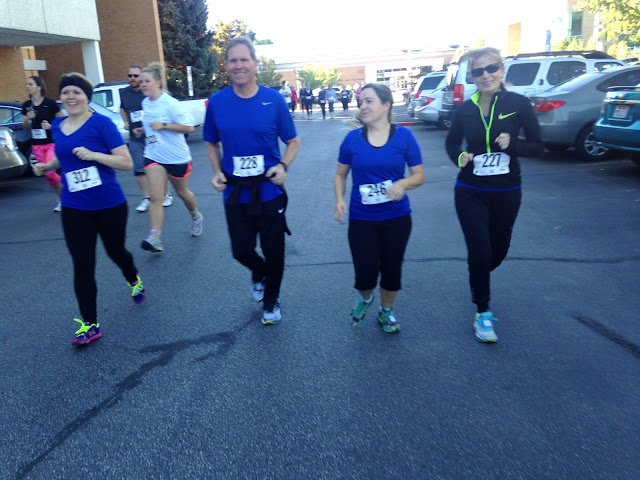 Then we were off.  I took a moment to grab a shot of my awesome family athletes.  They all did such a great job!  Eric would drive along the course to roar cheers and honk; he was LOUD and did not hold back!  Pretty funny and very motivating. 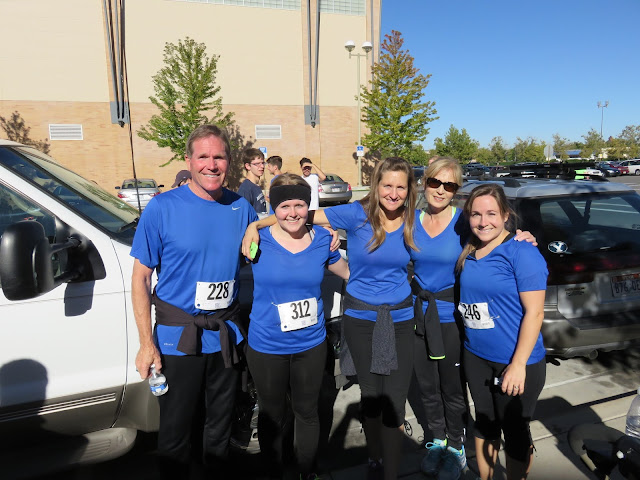 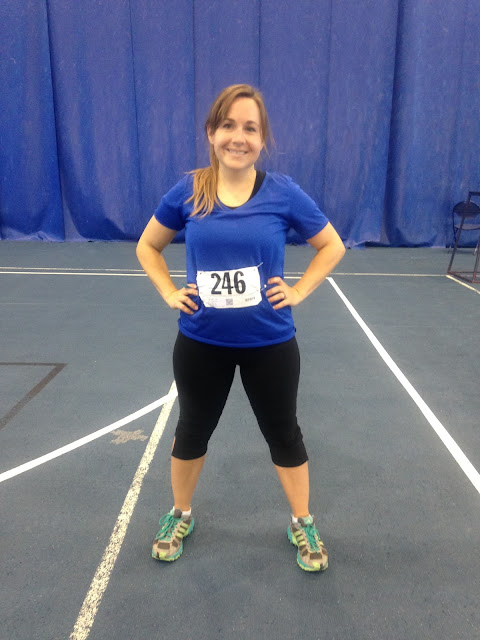 The 5k was called the SugarRush; for diabetes.  It was thrown by BYU students, and began and ended at the Smith Field house on BYU campus.  It was so fun being there; I often ran around the track in the winter when I was a student.  Lisa had similar feelings since BYU is also her Alma Mater.   We took some time after the run to take some fun shots in the field house. 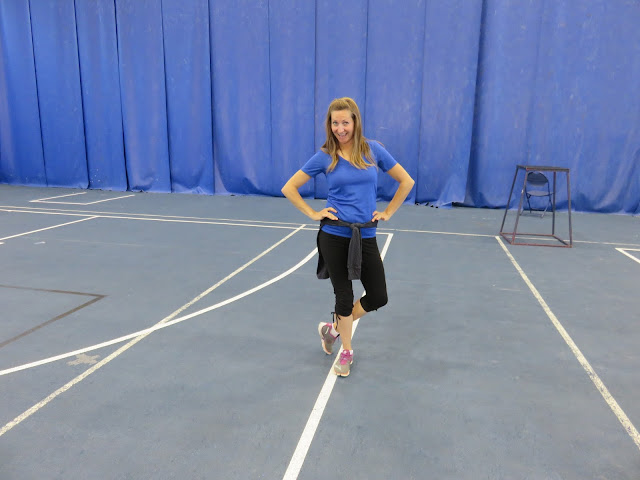 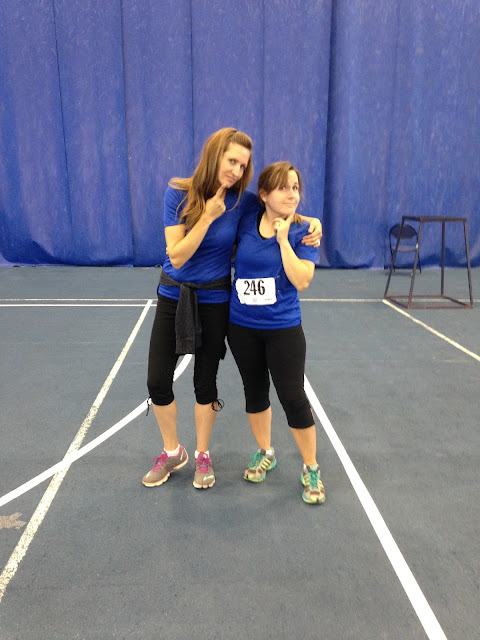 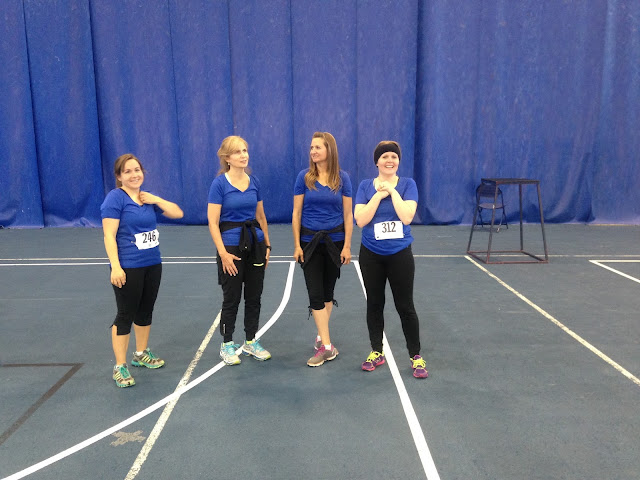 Wish more had turned out!  I am hearing talk of some possible 10ks that the girls might run, Dad and Lisa too.....hoping they happen!!  I'd love to do something like that with them again. 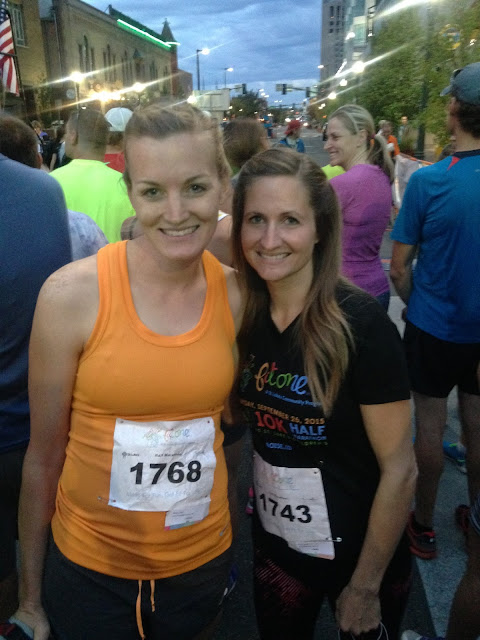 The third and last week was the FitOne half marathon in downtown Boise.  My friend Leslie had asked me if I wanted to run it, since she was thinking of doing it.  I had considered doing a different race, but decided to get on board with doing the FitOne since I hadn't done it before and enjoy running different courses.  Plus running downtown would be neat, and doing it with Leslie would be fun. Leslie is ridiculously fast, and since learning how fast (we are friends on mapmyrun, so I see all her workouts and stats) I decided to push myself and increase my pace.  Training this time around was much more intense for me, as I didn't just focus on my distance but really pushed myself to speed up. I had a pace goal for the race, and really wanted to make it.
The course was pretty and lots of fun.  I had no idea the course was going to have climbs (there were 6 in all), so I didn't train on any hills.  It was very challenging, but I love a challenge, and was able to make up for the time I lost on hills when things flattened out.  I beat my goal pace by 4 seconds per mile, and was very pleased!  I had increased my pace from a half I did 18 months ago by 12 minutes. Thanks Les for pushing me!!  Les and I had fun hanging out after the race (she is amazing; she placed 4th in her division and 6th for all females that ran). 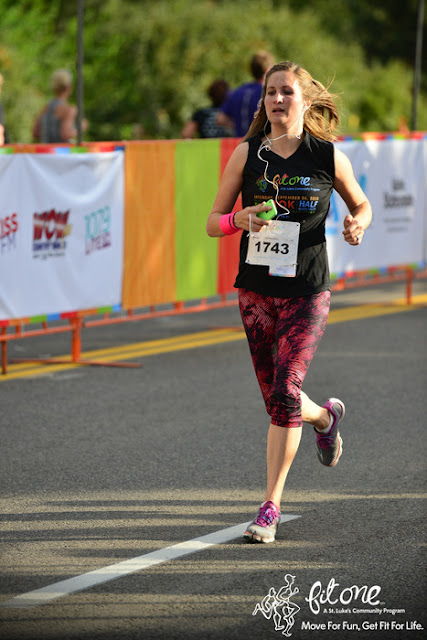 Then I went home and baked a cake. 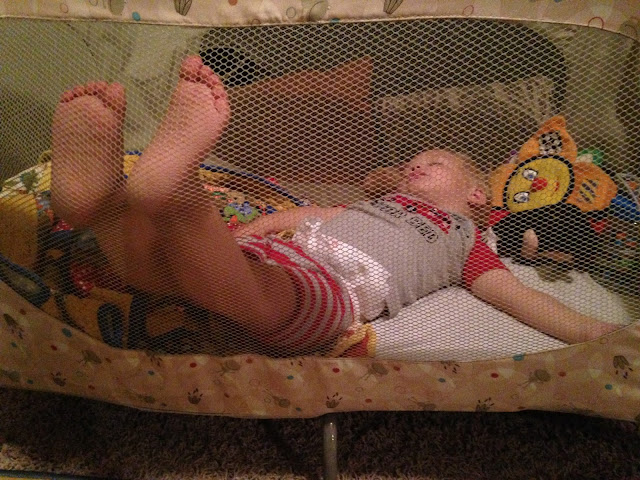 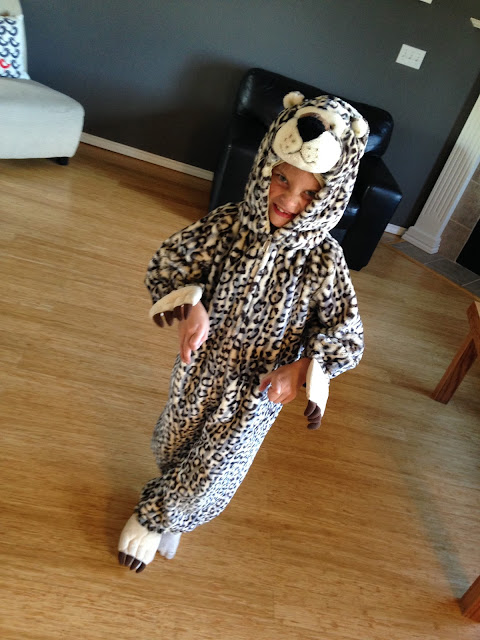 The other day I was upstairs and heard Katy Parry's Roar playing downstairs.  When I made it to the living room I saw Aspen in her leopard halloween costume dancing to it and roaring like nobody's business. I laughed hard.
Posted by Chelsi Ritter at 2:30 PM