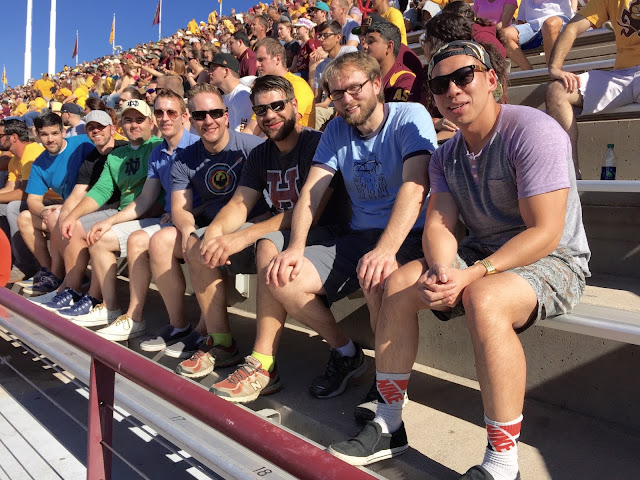 Last month Eric and all his buddies from highschool/college spent a weekend together in Phoenix. While they were there they went to an ASU vs. Washington game (Dave, Cody, Nick, Tyler, Patrick, Eric, Dustin and Dan).  I was so happy for Eric and his buddies that they could find a weekend that worked for all of them.  Eric's friends are very dear to him and I know it was a trip he won't forget. I told Eric I wanted a pair of socks like Dan's for Christmas. 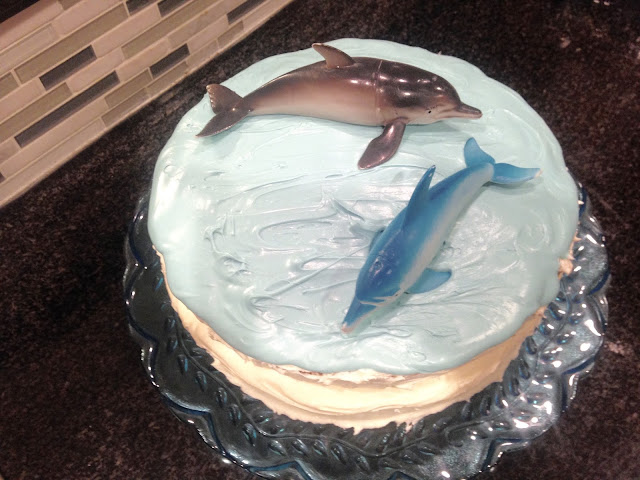 When it comes to my kids' birthday cakes, I am all about making a 2 layer cake and slapping on some of their favorite things.  Here's Oakley's birthday cake, complete with two of his plastic dolphins.  I know, classy.  Let me just point out that it is on a cake stand. 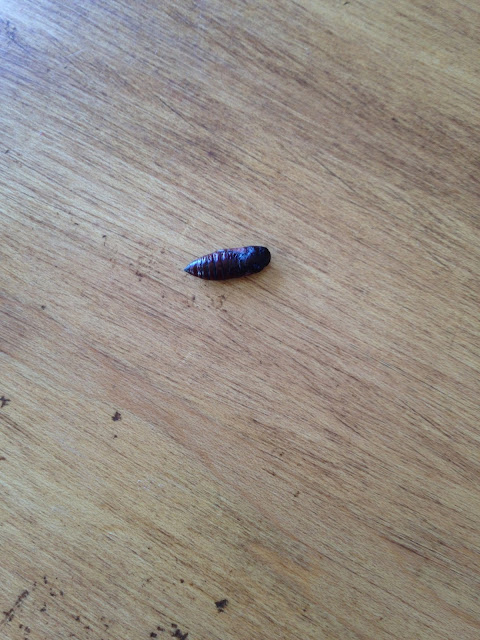 For some reason we had a caterpillar infestation in November.  I found one upstairs, one climbing the stairs, and two downstairs.  We tried to figure out where they were coming from, and came up with 2 ideas:  either they were crawling into the house from some space in the wall, or we had somehow brought them home with us from our last trip to Cascade.  One day I found this (above) and at first was afraid it was a mouse dropping, or something similar.  At second glance, however, I thought it might be a chrysalis.  I put it in a jar with holes on the lid, and it's sitting on our counter.  I looked up some photos of chrysalises and found some that match ours, and read it could take up to 6 months for them to open.  So we'll see if this one does. Its been several weeks now and no caterpillars anymore. 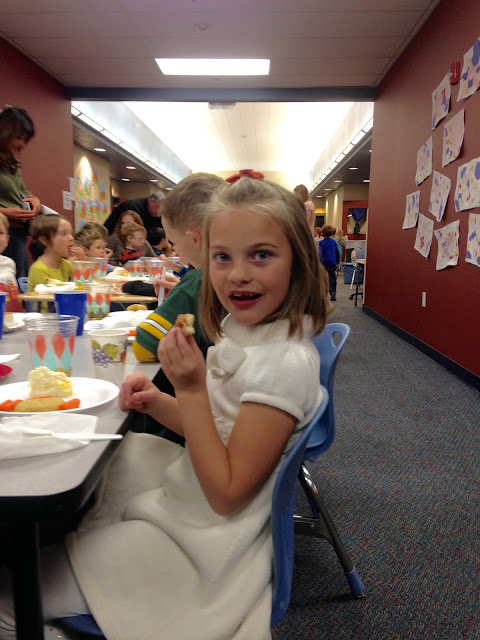 Aspen had a Thanksgiving feast at school and I went and helped out.  Its always fun seeing her there with her friends, and watching her interact with them and her teacher, Mrs. Cowen. 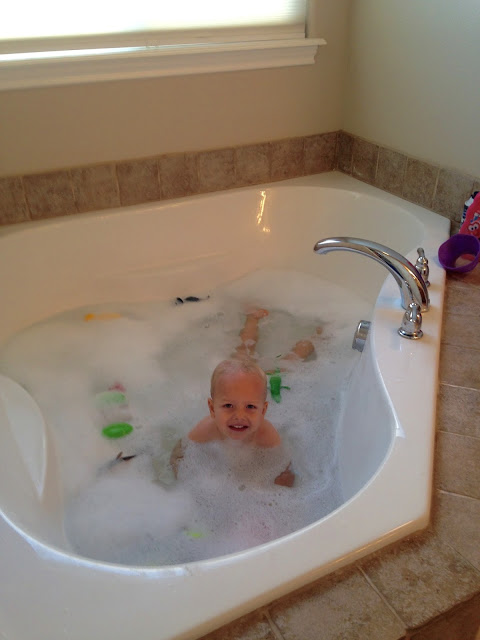 My baby in the bath.  This day he was in there on his own for the first time in a long time, and splashing bubbles on the wall almost to the ceiling. 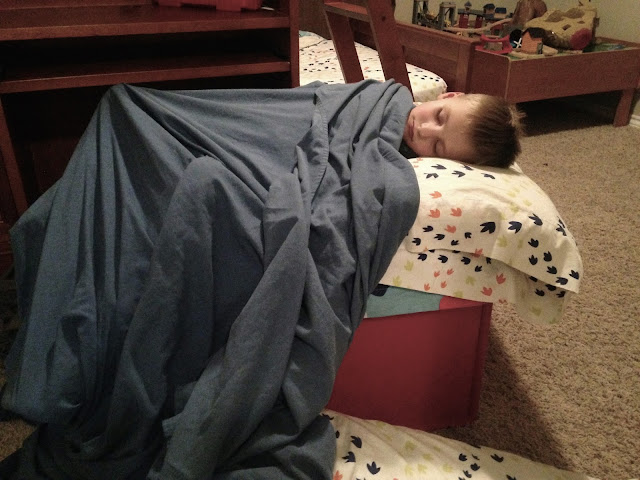 Sometimes Oakley likes to sleep on his hard, wooden toy box, which he claims is "comfortable."  Well at least my kids will enjoy camping :) 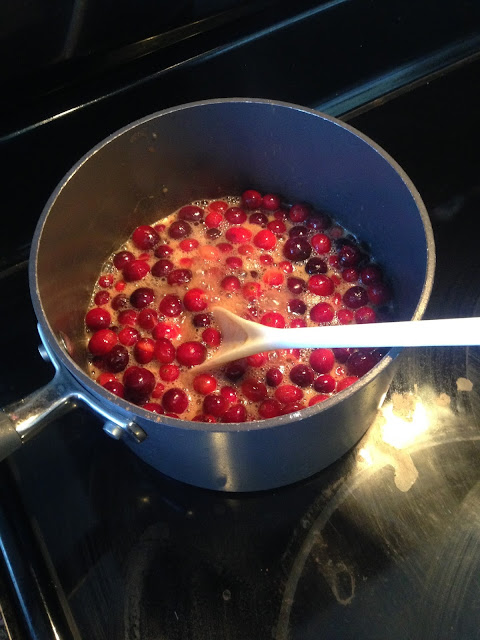 For the first time ever I made homemade cranberry sauce for Thanksgiving.  I am a huge cranberry sauce fan, and after one of my friends told me how easy it was to make from scratch I decided to ditch the canned stuff and make the real thing.  So easy and so delicious.  You know the saying: once you go real cranberry sauce, you never go back. 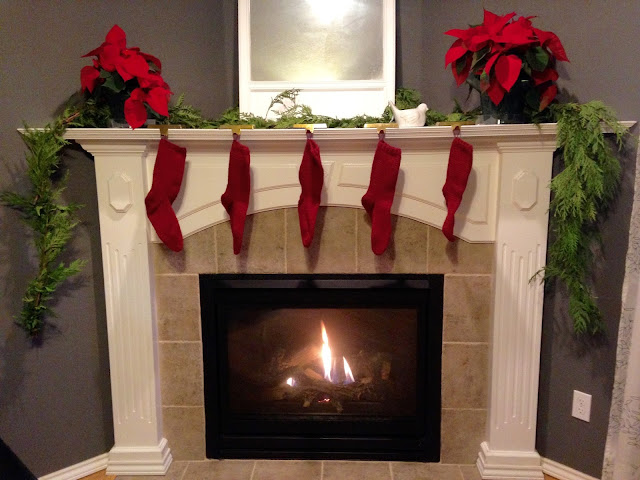 My mom made us matching Christmas stockings this year.  She had made us stockings before, which are beautiful, but I wanted some that matched.  Mom helped me pick out some yarn when she was here during the Summer, and sent me these a month ago.  You should have seen Eric and the kids when I pulled these out!  "What about our old stockings??"  "You can't just put new stockings on the mantel like that!"  "Why are you so against tradition??" (This last one from Eric).  I had no idea feelings for the previous stockings ran so deep!  I told my sister-in-law, Kaylene, about it, and she gave me a great idea: use one set for display, and the other for Santa's gifts on Christmas.  After making this declaration public, I'm happy to say I've been accepted back into the family. 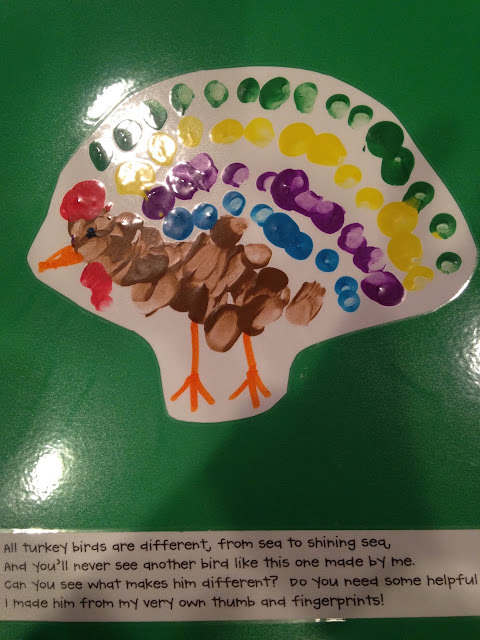 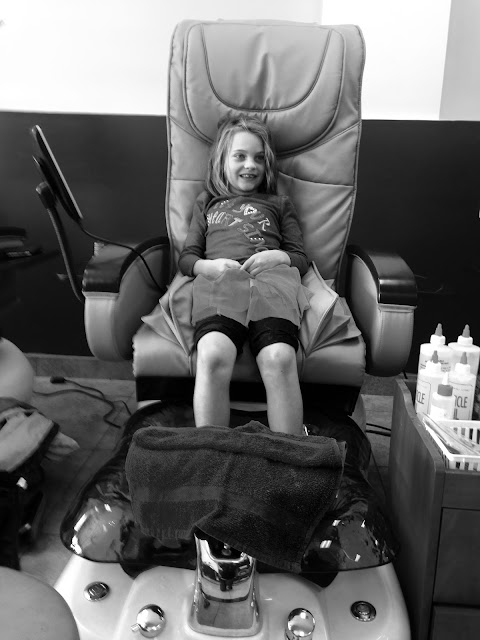 Over Thanksgiving Eric's brother Danny, his wife Shelby, and their adorable baby, Ellie, came out from California.  Ami treated us girls to pedicures, and Aspen got to come too. She'd been talking about wanting to get one for a few months, so she was pretty happy when we went.  She picked red polish for her toes, with sparkles and snowflakes. 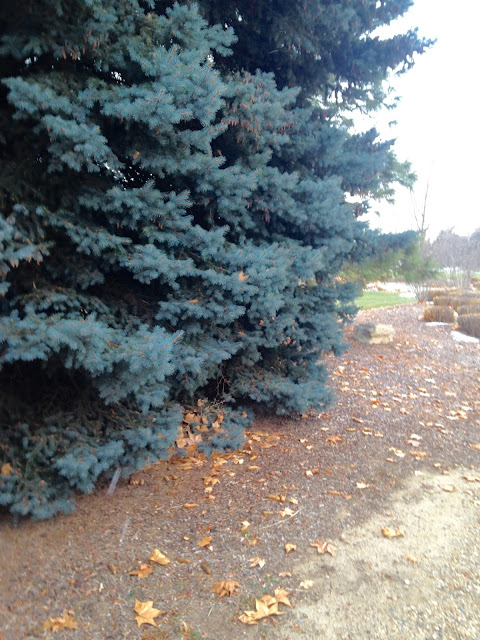 A few weeks ago I went on a run on a chilly morning.  It was probably 30 degrees.  After about 2 miles snowflakes started to fall, and for the rest of my run I was catching them on my tongue. It was one of those magical experiences, and I felt really close to the Lord in those moments. Mother nature is such a beautiful, amazing thing. 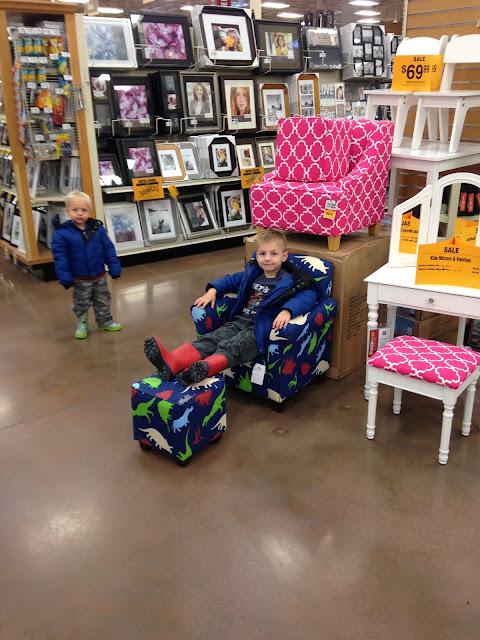 The boys saw this cute armchair at the store and I just had to snap a photo.  It even has dinos on it; can't get more perfect than that. 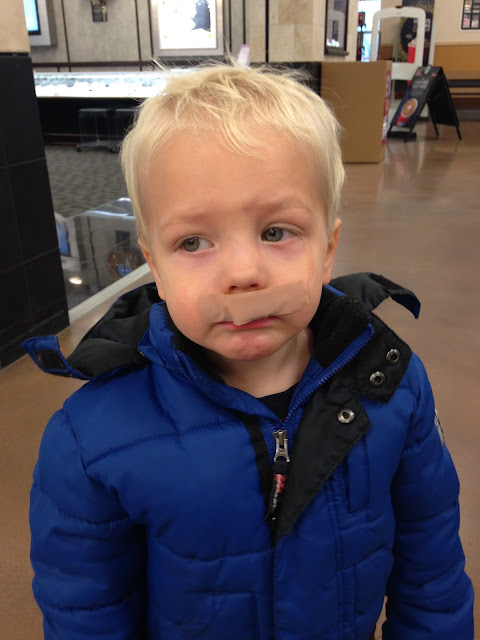 The other day when I was grocery shopping with the boys, Birch bumped his lip on something and started to cry.  He really wanted a bandaid on it so I gave him one.  Oh my I could not stop laughing! Every time I looked at him I would laugh.  Then I loaded the groceries in the car, put the boys in and sat down to turn the car on.  I looked in the rearview mirror, saw Birch, and began to laugh again because I had forgotten about the bandaid.  It really made my day.  Then in the afternoon I realized he wasn't going to take it off, so I decided to draw a moustache on it. I may have to just give him a bandaid with a moustache on it every once in a while for kicks. 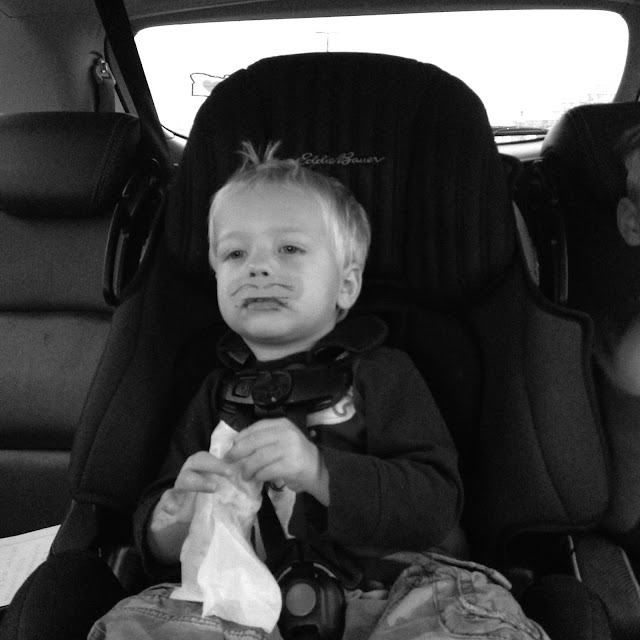 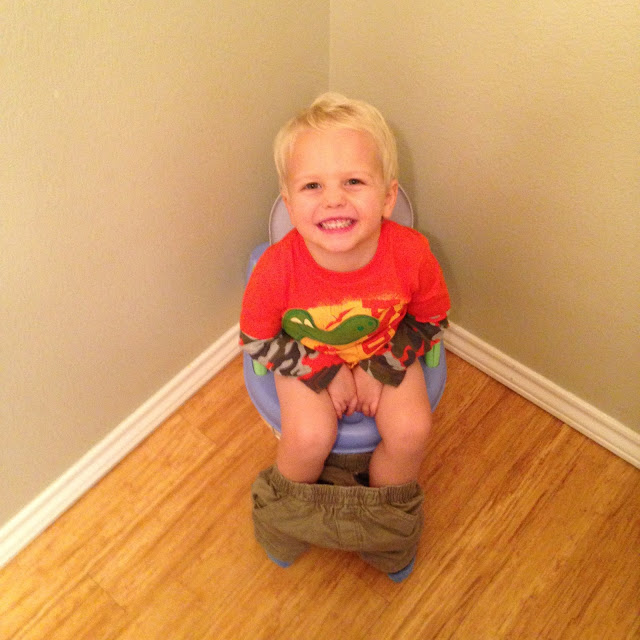 Birch sitting on the potty, and going for the first time. 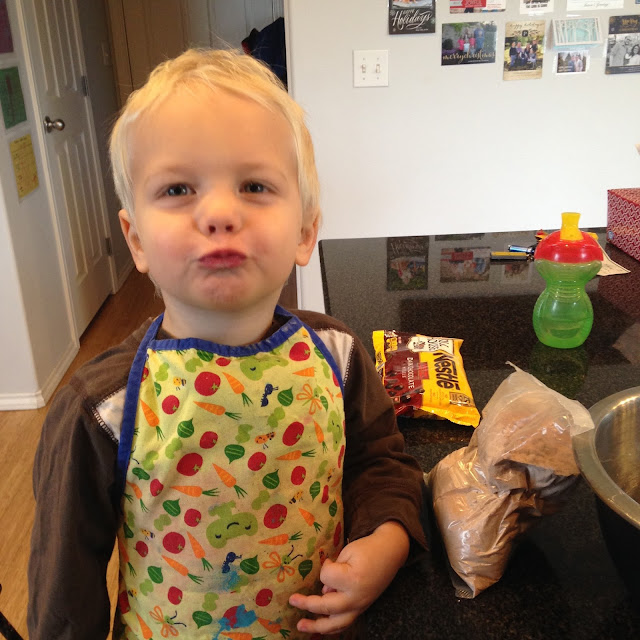 Birch helped me make cookies this morning while Oakley had a friend over.  I love baking with him, and he loves to help me.  He likes to poke his finger in things, but always asks me first, which I appreciate :) 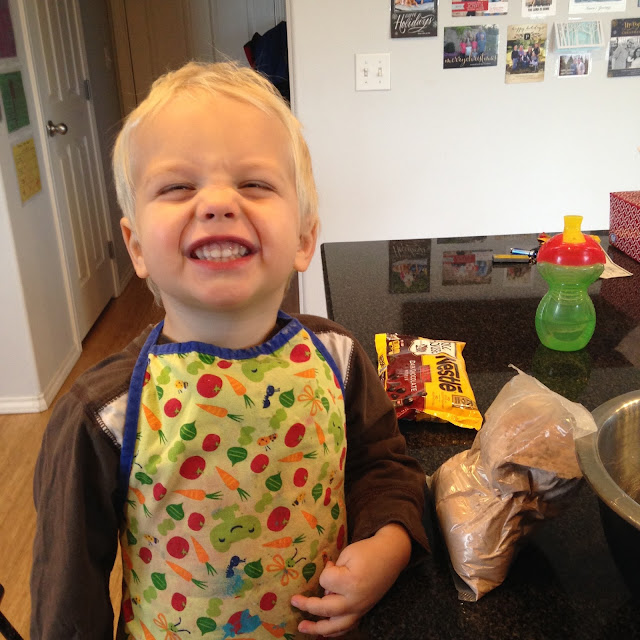 That's hilarious about the stockings. I've been thinking of redoing ours too; I guess I'll have to seriously ponder it :)

Oh my goodness, I just ate up this whole post! So much good life stuff. These days with young kids are so precious.

And Kaylene is a smart one - such a great idea to use the others for the gifts. I love the red yarn you chose and that's so sweet to have such personal stocking from your mom.

Love you so much!!
Merry Christmas!
B

That dolphin cake is classy! I'm sure Oakley loved that it was made by you. I like how you post numerous pictures with each blog post! It's nice to be able to connect your writing to the visuals.