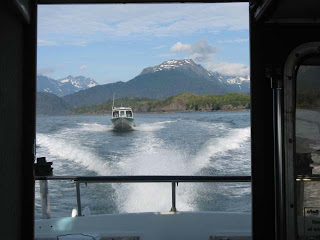 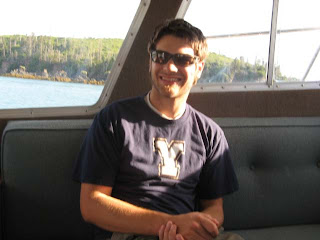 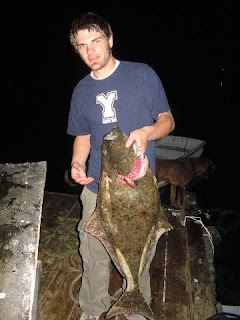 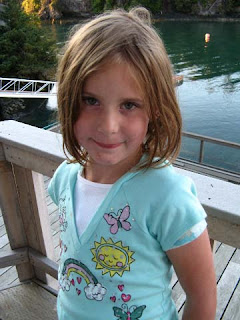 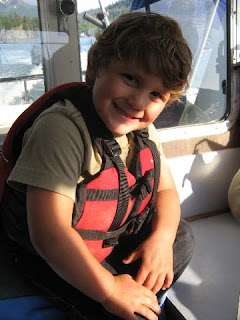 As most of you know, Eric and I spent the summer in Anchorage, Alaska. One day in particular stands out to us. We had gone to visit some friends in Halibut Cove, just off the coast from Homer. Chelsi's friend and former employer, Andrea Anaya, was staying there at a cabin she and her husband Gene had just bought. Well, we were really excited because we were about to go halibut fishing, and Chelsi was having a great day so far, meaning that her morning sickness was practically nonexistant (which was very unusual!). We left Halibut Cove and started on our way to the fishing site, which was about a 2 hour drive by boat. The waves were pretty bad and needless to say Chelsi's stomach started churning. By the time the boat had stopped 2 hours later she was pretty sick, with her morning sickness/sea sickness. Anyway, Eric was so excited to fish! He had always wanted to go halibut fishing. Well, to Chelsi's delight, there happened to be 2 very sick passengers on the other boat they had gone fishing with, and she took a ride back to the cove. Eric stayed and up catching 3 fish. Not bad for his first time!
While in Halibut Cove we loved spending time with the Anayas, and included are photos of Kaelys and Kailea, 2 of the children Chelsi nannied for.
Posted by Chelsi Ritter at 1:04 PM

Hey archaeology buddies! Good to see you on the world wide web, now I don't have to wait for your sporadic emails.