Dogs are scary, even chihuahuas 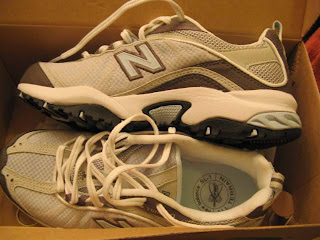 These are my new running shoes that I bought with my birthday money. My old ones fell apart about the time I became pregnant, so I threw them out and bought these the other day. I still have a week or two before I can start running, but I'm hoping they'll give me some extra motivation, as if my hanging belly wasn't enough, right?
I was reading my friend Nicole's blog about scary dog attacks, and it reminded me of one I had a couple years ago. First of all, I love to run, but one of the downsides is being attacked by wild and crazy dogs who somehow see you as a giant rabbit and go in for the kill. Well, one of the scariest incidents I had like this was when I was running in Provo, Utah. Eric was with me and we passed this one house and a dog came out and headed straight for my calves (Eric remembers the dog as a chihuahua, but I remember it as a much larger dog). I of course screamed (I'm not a big dog fan) and the dog's owner heard this and came running out. "Kill her! Kill her!" he screamed. I was shocked and picked up speed. Was this guy crazy? "Kill her!" he kept screaming. The dog heard the owner and eventually turned around and went to him. At this point I slowed down, realizing the dog's name was Killer. I kind of laughed but was shaking so it came out as a "hu-hu...." Eric, however, thought the whole thing was hilarious. Why didn't the dog head for his calves, though? I think it's because my calves are more meaty and defined.....
Posted by Chelsi Ritter at 7:34 PM

I just want to point out two things: 1) The dog Chelsi was running away from was about the size of a hamster. If it had bit her it wouldn't have been able to reach above the shoe. 2) Dogs, like all animals, can sense fear. If you are ever confronted by an angry animal, stare it in the eyes and charge it...unless its a moose, or a gorilla, or a bear. Well, maybe a bear.

I got chased by many a dog when I was a paper girl.

I loved this post, Chelsi! It made me laugh and that is just what I needed for the day. I bought some new work out clothes to get me motivated to start working off the pregnancy lbs. (plus a few!), but after seeing your shoes now I'm thinking I need some new shoes to match!

I would have been scared. What if the dog had been rabid? It doesn't matter how small an animal is, if it's rabid it will do you harm. And won't back down when you charge it...

Your blog is my FAVORITE one to read! I always get a good laugh and love the content and photos!
:)

hi eric and chelsi!
i check your blog from christie and cody's every once in a while. first off....aspen is absolutely beautiful! i'm so excited for you guys and hope all is going well. second of all, i love the funny posts from chelsi and the equally funny responses from eric. keep them coming!

Tag your it Chelsi! Got one for you to do on my blog.