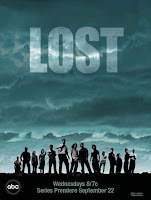 Maybe it's the sandy beach, the mysterious cast or the scary noises in the forest. Something about this show has me hooked! It's not like I'm going to pass out if I don't watch at least one episode every day, but it's just so much fun to watch it. It's this wonderful new way that Eric and I have found to bond with one another (wink wink). We watch the show, we give each other surprised glances throughout the episode, and then talk about possible interpretations afterward. It's sort of like being in a book club with just your spouse, only you're watching t.v. instead of reading a book. And that's way more scholarly....not!
The truth is that Eric and I don't have a television because we reeeeaally like to watch t.v. However, we also hate the way we feel when we watch too much. Thus we have realized not having a t.v. is the only way for us to control our t.v. urges. So instead we rent dvds now and then and watch them on our laptop. However, the last time we went to check out a movie we couldn't find a single one that sounded even remotely cool so we decided to start watching Lost episodes and....bingo! We can't stop. So you might ask, what's the difference between watching Lost episodes on a laptop and just having a t.v? well, we're only watching one show, the commercials are 30 seconds long, and we control how much and when we watch. It's the best situation and I've got to go now so I can find out if Claire ever returns from the forest with "the others" and......
Posted by Chelsi Ritter at 6:06 PM

Brent and I totally got hooked on Lost that way. Now we are watching the new season on t.v. but I liked watching it on dvd so much better. We usually end up watching most of our t.v. on our laptop online. We are always busy when the shows are on television and that way we don't have to bother with commercials.

Hey, Luke and I don't have a tv too for that reason. We much prefer watching the Biggest Loser and the Office via internet - shorter and cleaner commercials are a big selling point!

I need to get caught up with the rest of the world and watch Lost. I know I will love it once I start. The problem is it is one of those shows you have to start from the beginning and I'm too lazy to drive to Coos Bay (30 min. away) to the nearest Blockbuster to rent it.

HAPPY BIRTHDAY, Chelsi! I was thinking about you today...