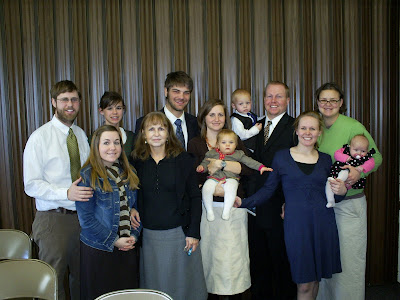 I always get melancholy when I have to leave my family. My brother Ian always says, "family's the most important thing," and boy is he right! It's been a lot of fun being out here in the east, seeing new places and having fun adventures, but nothing compares to being close to home, which I've discovered always seems to be where my family is. See that item in my mom's hand there? That's a tube of Blistex, which she always has on hand, and we all tease her about it. See how Demri (the one in the blue dress) is posing? She's the quirkiest little thing I've ever seen, and just wants everyone to be happy and laughing. Over Christmas break my sister-in-law Tia (in the glasses) sent hilariously mysterious texts to a guy Demri works with (and likes), telling him in the end that she (Tia) was Demri's sister-in-law, and asking him if he was interested in Demri. What did Demri do? Laugh it off!
Sasha (in the scarf) has that beautiful long hair, and we've tried to get her to cut it, but she won't. She came so close one day to letting me do it, but just can't stand the thought of it being gone. James, Sasha's hubby, dotes on her every chance that he gets, but he also loves her long hair, which is another reason she wouldn't cut it.
Mishell, next to Eric, could eat a horse and it wouldn't show. And my brother Ian, with the huge smile, is a manly man, yet loves to bake. We often share recipes over the phone, and he gets really excited about silicone bakeware.
To everyone in my family: I love you guys, and can't wait till we can live nearer!
Posted by Chelsi Ritter at 8:38 AM

What a fun post, Chelsi. It is hard being away from family. Thank goodness for the conveniences of phones, e-mail etc.!

Aw, so fun to see everyone's faces together. I loved this post!! Your mom and her chapstick. I miss her!! I miss you all!!! I seriously want to organize a family reunion. I will come to you guys.
It's fun seeing Ian and Tia's daughter. I haven't seen a picture of her since she was born.
Family is wonderful.
... a few random memories of your house when we were growing up:
- The chalkboard in the kitchen by the phone that you'd doodle on
- The recipe box full of "things to do" whenever we'd get bored
- Your dad's gourds that were so beautiful
- The long "hand painting" in the hallway
- Suave shampoo in the bathroom
- Making up dances to songs we love
- Always listening to the radio
- Making a James Bond movie
- Sledding in the winter
- Playing outside in the summer for hours and then Matt getting mad and walking home
- The deer eating off the apple trees
- The shoes in the entry way
- Home made vanilla ice cream with fresh picked raspberries
- Trying to time travel after watching "Somewhere in Time"
- The smell of your house
- A fire burning in the woodstove all year round (I LOVED that!)
- Watching TGIF in your parent's room
- Looking through your class Yearbooks on a regular basis scouting for cute boys :) (that was me who was scouting I think)
- "Can you see what I'm saying?" And then my shoes started to squeak
- "We're all just ordinary, average guys, with average kids and average wives"
- And the final memory for now: Ian and Matt dancing as penguins to Axel F.

I love this post. I miss your family too!