If my husband had his way, we'd be living in a tent. Probably forever. That's just the kind of life he prefers: the least amount of "stuff" separating you from nature. When we were dating, he would joke with me about living in a yurt one day. At one point I realized, he wasn't joking.
This is a yurt: 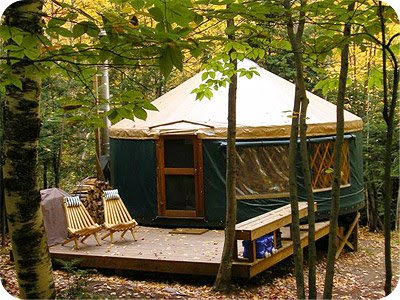 It's basically a big tent with a wooden frame. Some have stoves inside, and they aren't very large. Here's the inside of one that I really like: 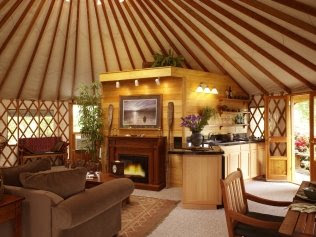 Ooh, and here's a tree yurt, which is very Swiss Family Robinson. I like that: 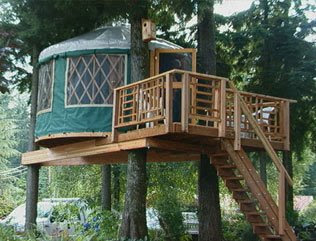 This one makes me think of Christmas. So cozy! 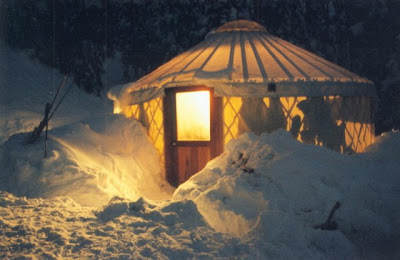 Anyway, as I was saying, I realized at one point that Eric really did in fact want to live in a yurt. At first I was pretty disturbed, but after a while I warmed up to the idea. Not of actually living in the yurt, but owning one as type of "cabin-substitute". More comfortable than a tent, with a wood stove, but more exposed than a cabin. I actually really like the idea now.
We've been talking about building our own home one day, one that's more affordable. Sometimes I just feel like I've got too much stuff. I throw out clothes at least 3 or 4 times a year, and I swear when we move I'm throwing out half our stuff. Anyway, have you seen these? Eric and I found out about them a couple years ago and are big fans: 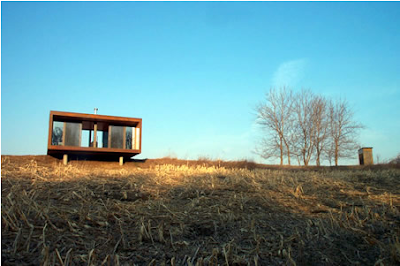 They're called Wee Houses, and talk about simplicity! I wish I could fit all my stuff in one of these! They're not as cheap as we had hoped (unless you want a really tiny place like the one above), but they're affordable...and yes, I do believe that that's an outhouse up there on the right..... 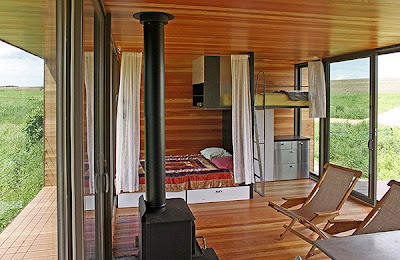 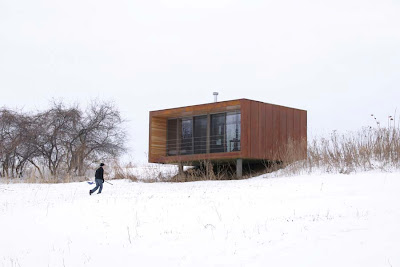 Dreams, dreams!
Posted by Chelsi Ritter at 10:33 AM

Can I visit you in your yurt or wee house?!

haha...yeah...yurts. You guys are funny. Chelsi, tell me about Ireland. Favorite places, things, etc. etc. When did you go? Email me. laura.shearer@gmail.com

Chelsi of all my friends I would have to vote you to be most likely to live in a yurt! LOL I remember when Ian and Tia were a little concerned about you marrying a guy who wanted to put you up in a tent. Glad it's all worked out. Wherever you live I hope that you are safe from the elements! yikes!

Chelsi, you're not alone.

We, too, dream of yurt living. By the looks of the inside of that one, we might be able to pull off some high class yurt living.

The tree yurt sounds like a great idea. It would take a little more effort for bears to claw through that one...

ahhh chelsi ... loved your comment on my blog ... man in the van - guster takes me to that place and reminds me of you all!

i too remember hearing eric talk about living in a yurt ... super cool. you people are so cool i can't even believe it.

Okay, I too would love to live in a yurt! Or something with straw bale walls and rubber flooring...Sigh. I am actually looking at some of the kits that Dwell puts together - I just don't want to live in a house that looks like everyone else's.