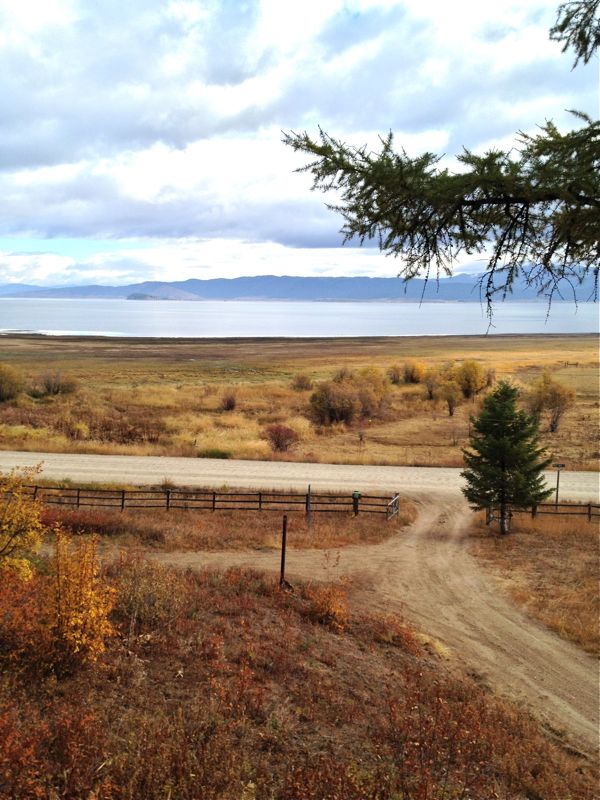 We've been fortunate enough to make it up to Cascade several times this year.  I had never been up there in the Fall before, and had no idea what I was missing out on until we went a couple weeks ago.  I always think of the Cascade area as an evergreen oasis, but realized this trip just how many Aspen trees are up there.  The colors were amazing! 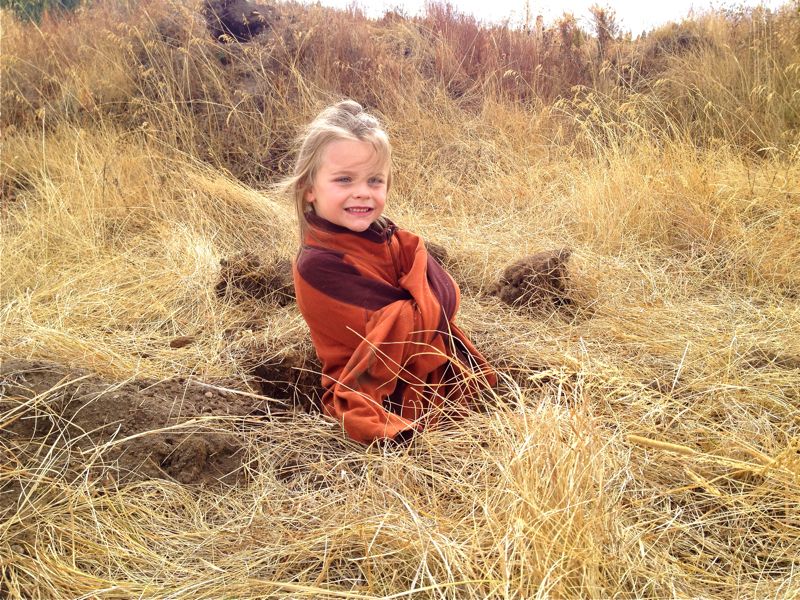 Eric shot this photo of Aspen with his iphone and I love it so much; I may have to get it framed. 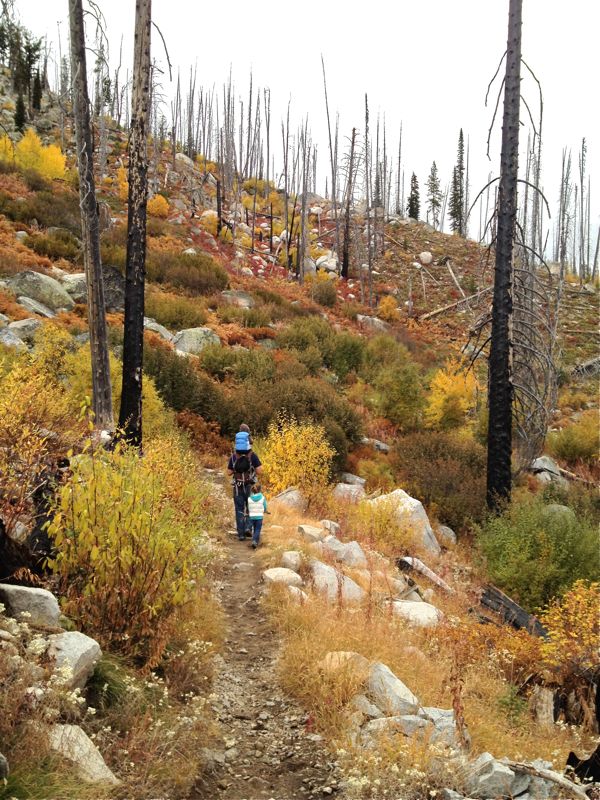 We took the kids on a hike to a lake while we were up there (2 miles round trip).  It was such a pretty hike, but we had been hiking quite a while when we saw a marker that said we were only half way there.  Aspen was tired and I was pretty hungry, plus we thought we were almost there. We were all pretty confused/devastated, but kept going and got to the lake about 20 minutes later. 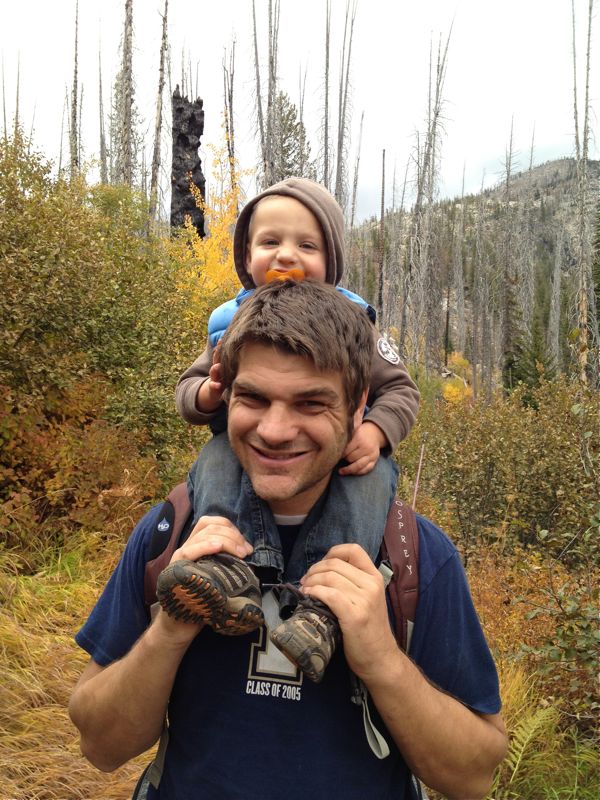 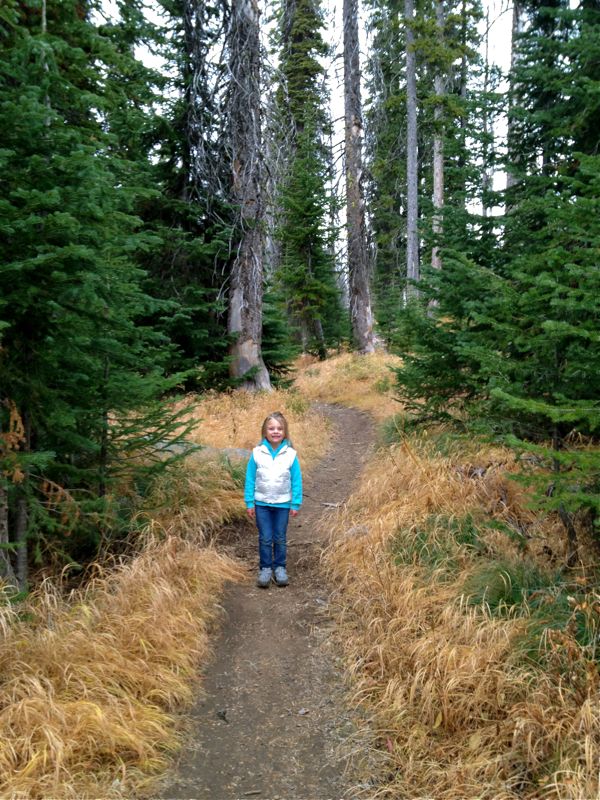 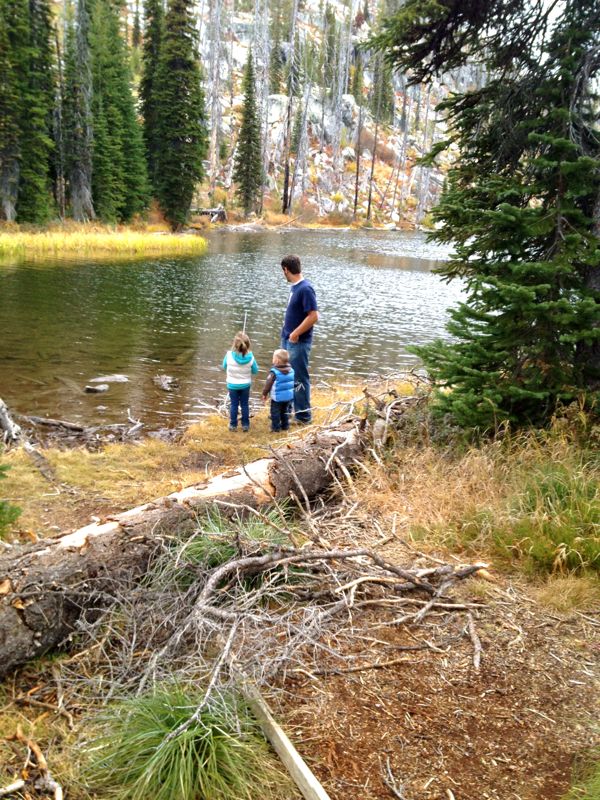 Aspen is really wanting to catch a fish.  She has fished several times this year with no luck, but we're talking the edge of a lake/pond fishing, nothing serious.  Next year we'll have to take her on a boat and get her where the fish are. 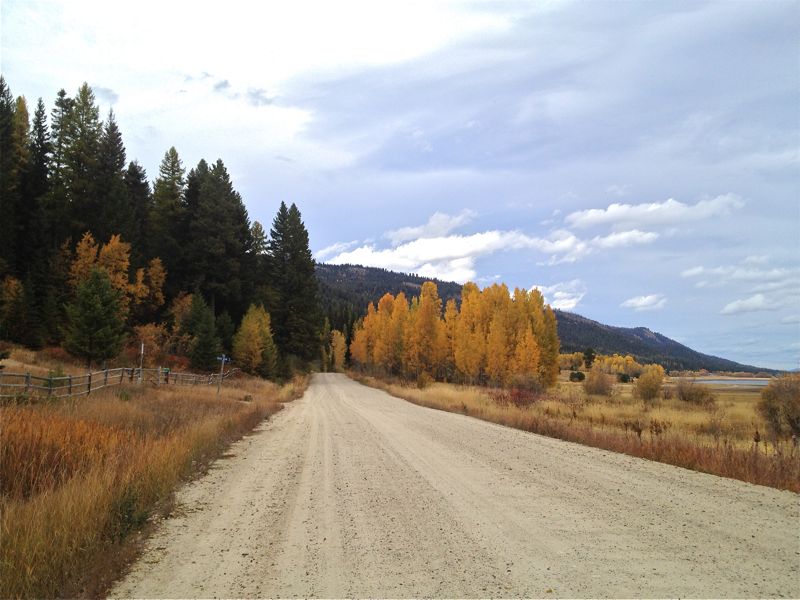 Look at those Aspens!! 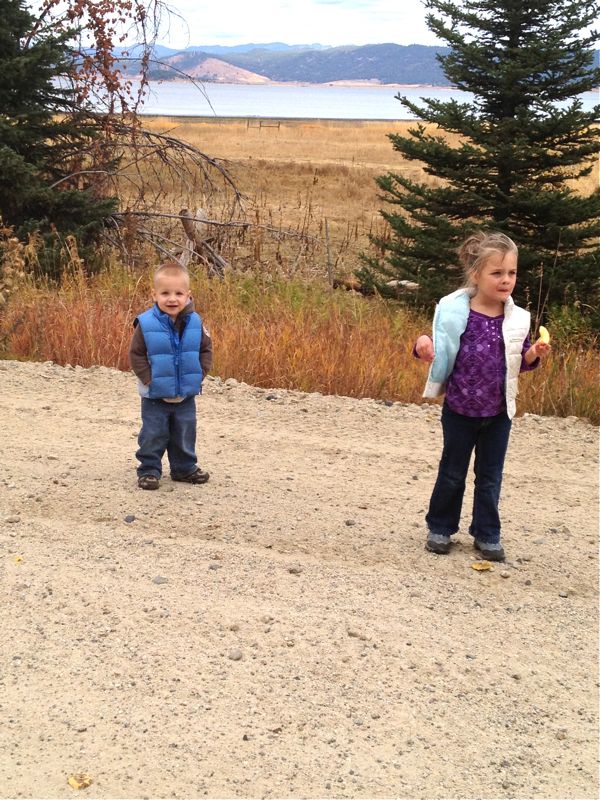 There's not a lot to do in Cascade in the Fall other than hike and relax, and that's exactly what we did.  We were there celebrating Eric's birthday, so we did that too.  Last year I decided we would start making haunted gingerbread houses (instead of making regular ones at Christmas) before Halloween so we did that too. 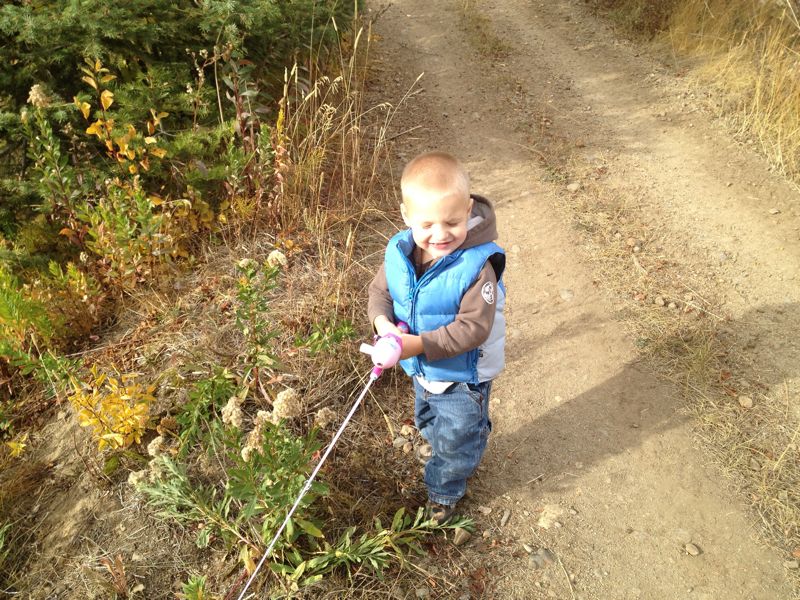 On one of our hikes we took the kids up behind the cabin.  We had been talking about bears and then saw a huge pile of bear poo.  Just then we heard a loud grunting noise, and Eric and I looked at each other.  Not wanting to scare Aspen, we told her we were going to turn around and go back, quickly.  Aspen however kept lingering so finally (after we heard more grunting) we we told her we'd heard something resembling a bear.  Once we got back to the cabin we realized the sounds we'd heard were actually cows mooing like crazy! 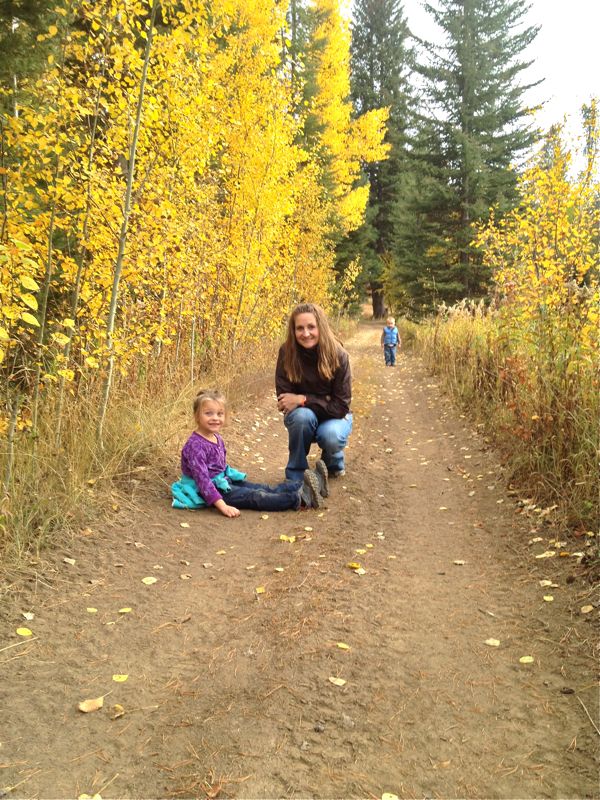 My kids and I just can't get a decent photo together, even though Eric tried his darndest.  At least in this one we're all looking!! 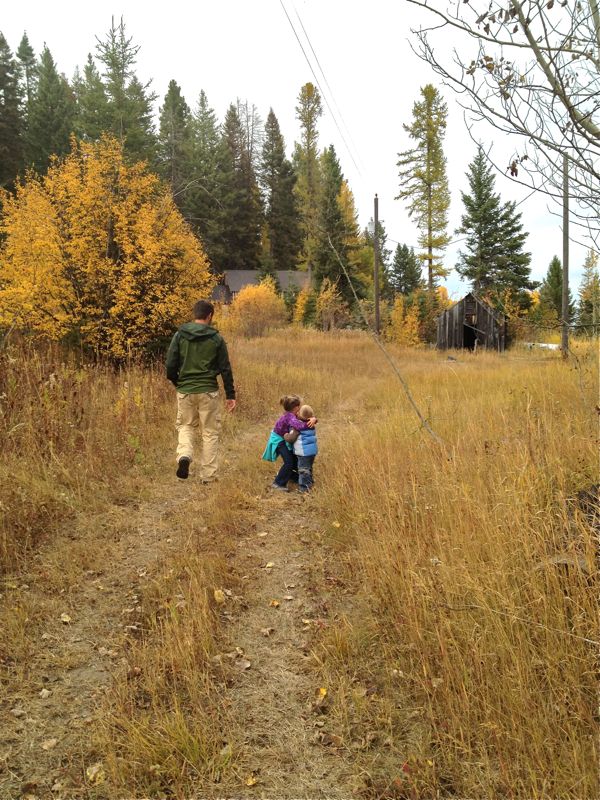 I've always been intrigued with these dilapidated barns near the cabin.  How old are they?  Who lived there?  What was their story? 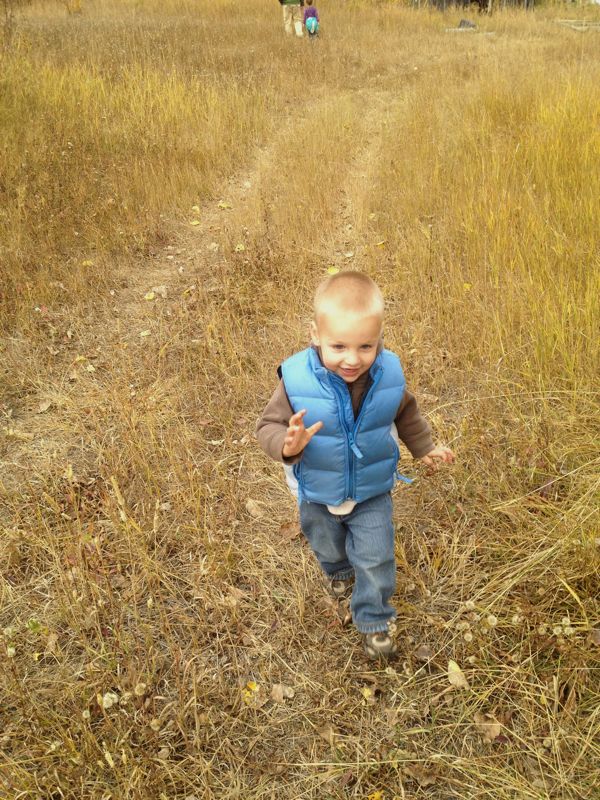 I can't believe how big Oakley is.  He'll be 2 in a couple weeks and he's looking like a little boy now. Most of the time though I choose to ignore that and sometimes even call him my baby.  Call it denial but it's my right.  I love being a mommy! 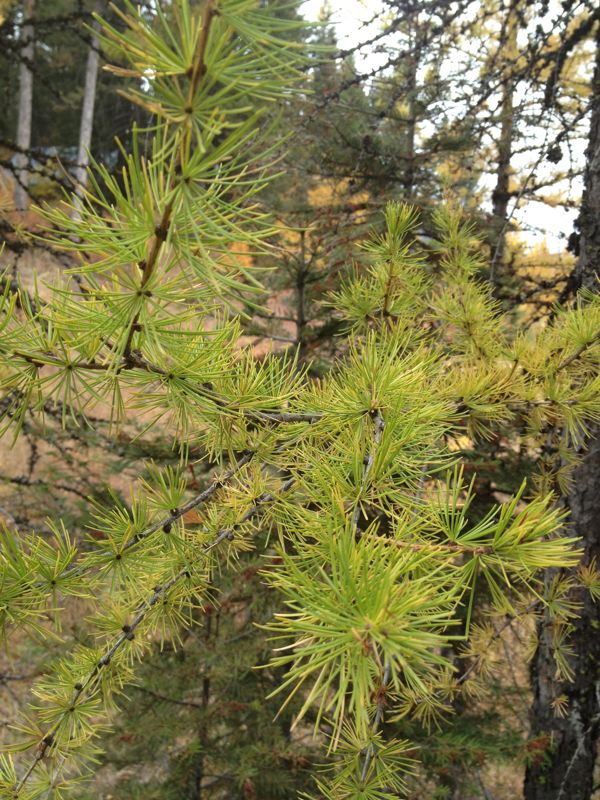 Being in Cascade reminds me of Oregon, with all the pine trees everywhere. Oh Oregon, how I miss you! 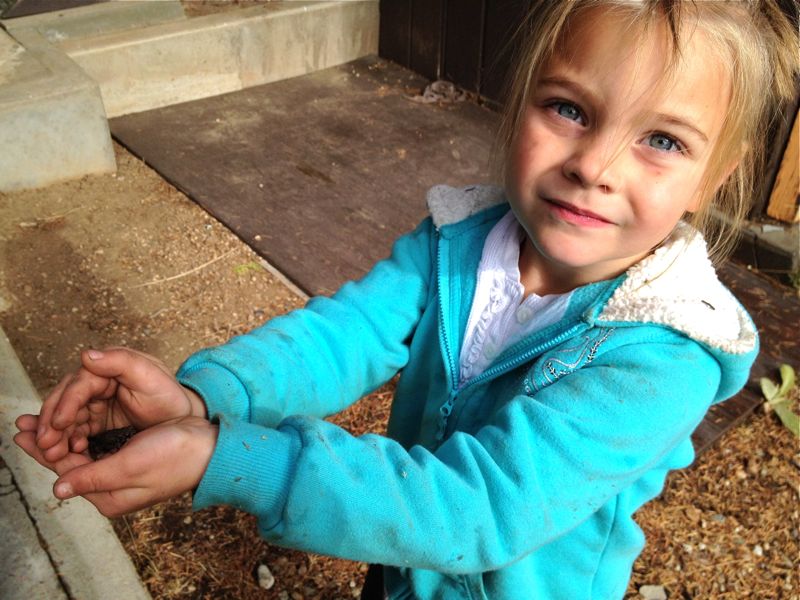 The kids had been talking about finding a frog, and finally got their wish!
Posted by Chelsi Ritter at 4:40 PM

Wow, what a beautiful place! It does look like Oregon! I just LOVE that photo of Aspen too... definitely a framer!
I always think the same things about those old barns!! I want to travel back in time and see it when it was in use. But I also just love their old dilapidated look. So pretty and worn.
I have to say that when you said, "Oh Oregon I miss you"... lately I've been liking Oregon less and less. Never thought I'd say that. It's just getting so expensive to live here, and it rains half the year... but I've obviously never lived anywhere else... so the grass is "always greener" in my mind sometimes. :)
Love and miss you! Let's start planning that reunion for next summer!
B

What a fun trip! And you got a lot of great photos. That one of Oakley with his hands in his pockets is pretty darn cute! I'm jealous; I wish we had a cabin in the mountains to retreat to...

That looks amazing! I'm jealous of your fall :)