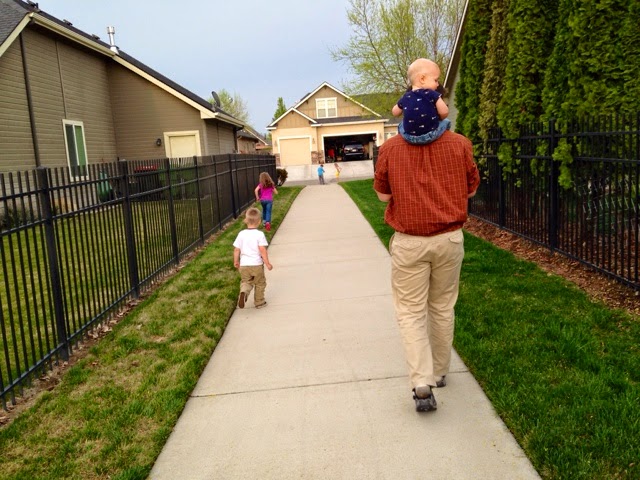 In the Spring especially, almost every night, I wish we could leave the house and go for a walk. Unfortunately there's never time in between dinner and bedtime, although I couldn't tell you what we do inbetween! I miss evening walks. When we lived in Cambridge I worked late a few nights a week, and Eric would meet me at the subway and we would walk home together. When Sasha and James lived with us a few years back we could often step out for an hour after Aspen was in bed. Now it's a lot harder to have an evening walk, but the other night we somehow made it happen, and it was glorious. 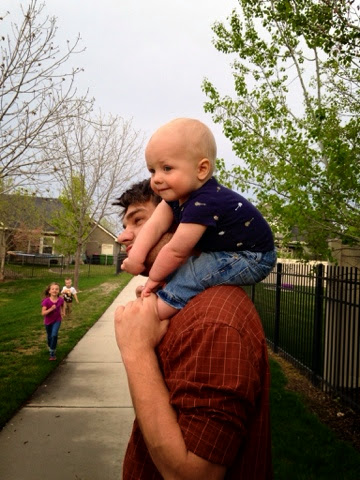 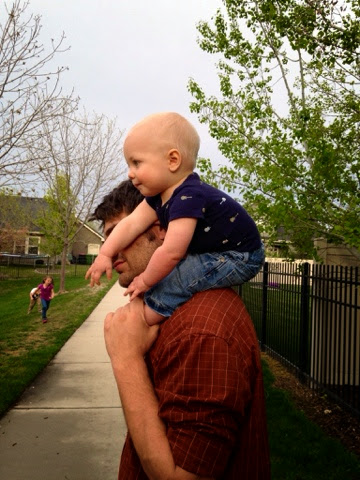 Aspen kept saying she needed open space, which I thought was funny since we were outside, but then we found a large common area for the kids to run in and she told me it was exactly what she wanted. 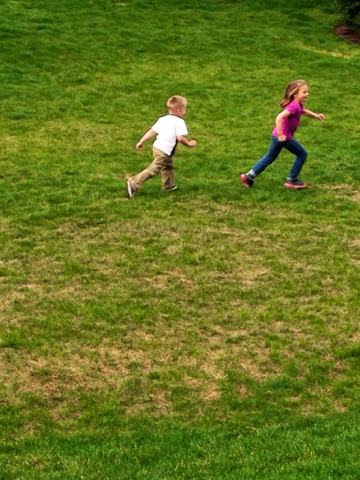 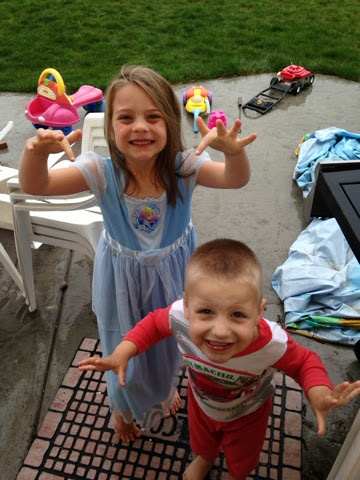 Our backyard leaves a lot to be desired at the moment! I'm hoping we can get some work done on Saturday, it's supposed to be beautiful. 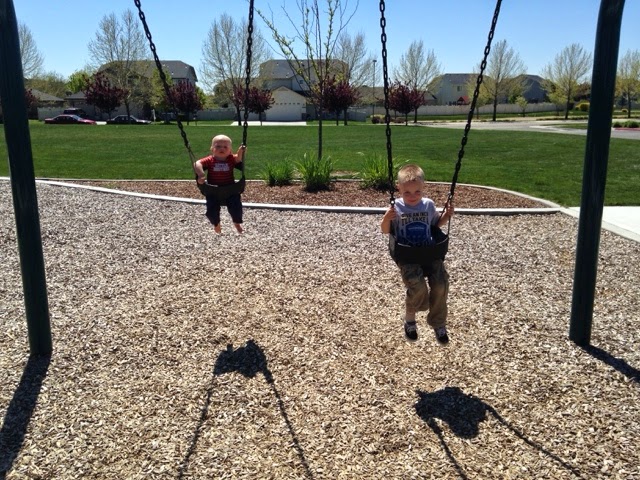 The last 2 days I've run the boys to the park after dropping Aspen off at school. They were short visits since Birch naps soon after we get home. 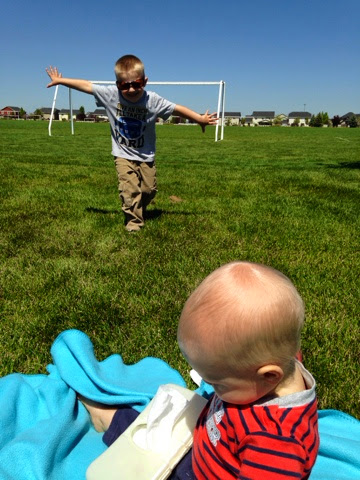 It's so worth it. Today I was going to try to run to the store instead, but then Oaks mentioned how badly he wanted to go to the park and I just couldn't say no. I've got such a soft spot for him, woops!
Oakley has a habit lately of saying "what the?!" and "what the....heck?!" literally all the time. 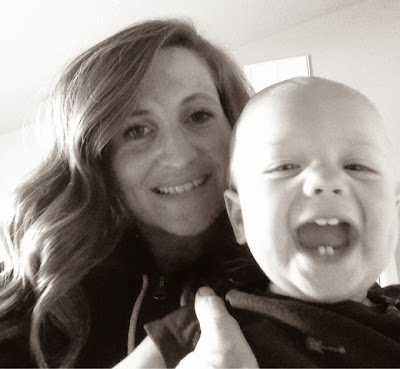 I am trying to take more photos with me, myself and I included. It's tricky when I'm usually the one with the camera; any tips?? 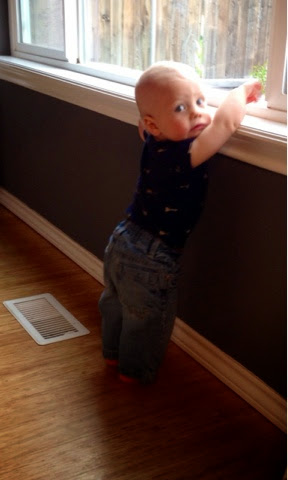 Birch is liking standing up, although someone else has to get him there ;). He's still learning how to crawl and pull himself up. Right now he's just pulling himself along the floor. It grosses me out, especially when I catch him on the bamboo floors and run and pick him up! 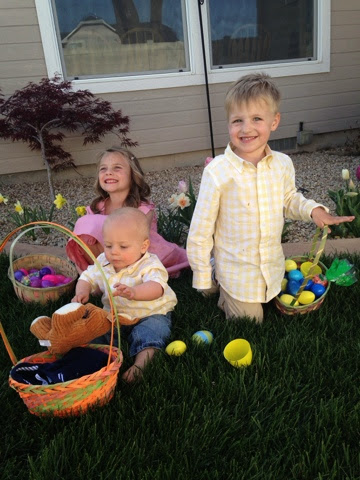 Here's a photo from Easter at Pete and Ami's. The kids loooove the annual Easter hunt at Grammy and Papa's! It was a very fun and special day. I love Easter. 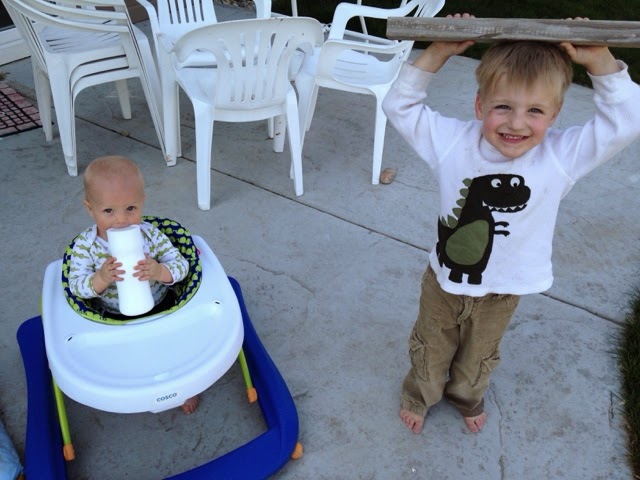 For the last four weeks my Saturday mornings have consisted of a long run, training for the half marathon I registered for that's in a couple weeks. I started running in middle school as a sprinter, but the older I get the more I enjoy a nice long run. I put on a good podcast (my favorites are Radiolab and Stuff You Missed in History Class) and I'm off.  Its great.
The last (and first) time I ran a half was seven years ago. I had trained really hard for it, and found myself really nervous that morning. I felt sick! I thought it was strange because I usually feel anxious before a race; I want to do well, but this was different. Well I ran the race, it was aaaawesome (this is when we were living in Alaska so the views were amazing), and then the next day I felt even worse! Turns out it was morning sickness and I was pregnant. Trust me that ain't happening this time ;).
Posted by Chelsi Ritter at 2:58 PM

It's fun to catch up on your blog and think back to good Boston memories. Good luck on the half marathon! It's on my "someday" list :)

I loved this post! We love evening walks so much too. They are priceless little treasures in this season of life. To be out of the house, soaking up nature and letting kids run free. Ah, feels so good.

I know I say it a lot, but I just have to comment again on how beautiful your children are!! Ahhh, I wish we lived closer. What a treat that would be. I know that Selah would just adore Aspen!!