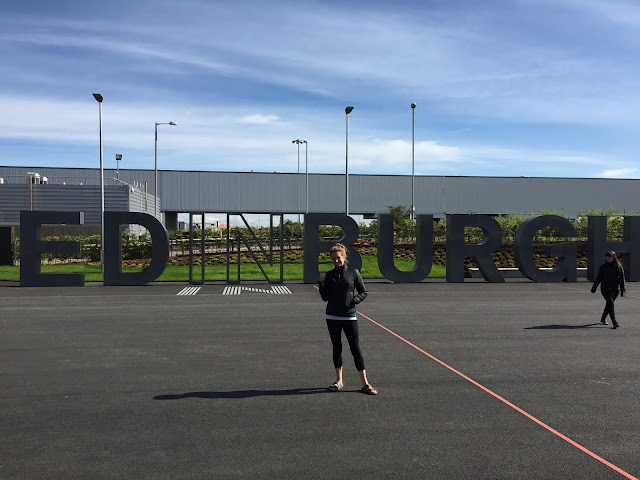 Eric teases me that I've been planning our 10th anniversary trip for the last nine years.  And, yeah, I guess he's right.  Since visiting western Europe years ago, I've wanted to take Eric there.  He loves the history and quaintness of New England, so I figured why not take him to "old" England?  Eric agreed to let me plan our trip, but deciding where to go was really difficult.  We finally decided on Scotland, England and northern Wales.  We flew into Edinburgh, rented a car, and made our way south. 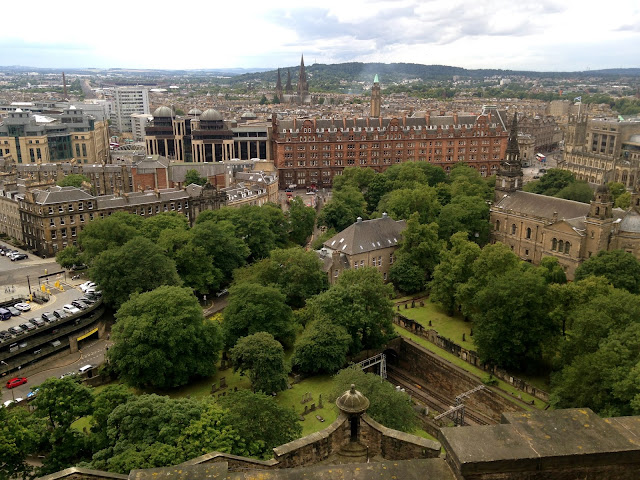 Posting all our photos and what we did is going to take a while, so I will be doing this in stages.  Today I'll be posting about Edinburgh.  When we flew in it was 8:30 a.m. Edinburgh time, 1:30 a.m. our time. We hadn't gotten much sleep the night before we left on our trip, let alone on the airplane.  I felt like a zombie, but was too excited to care. 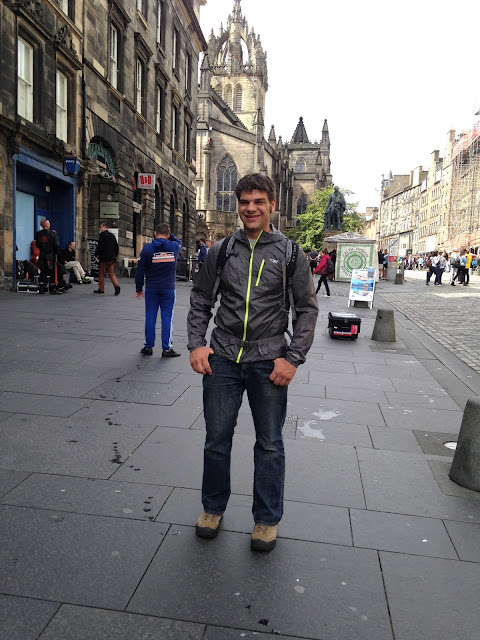 My last trip took me to Ireland, Paris, and southern England and Wales, so I had never been to Scotland and this was especially exciting for me.  Eric had never been to Europe, so everything was new to him.  He loved Edinburgh, with its stone architecture for miles.  It is a very pretty city.  And clean!  We were impressed with how clean it was. 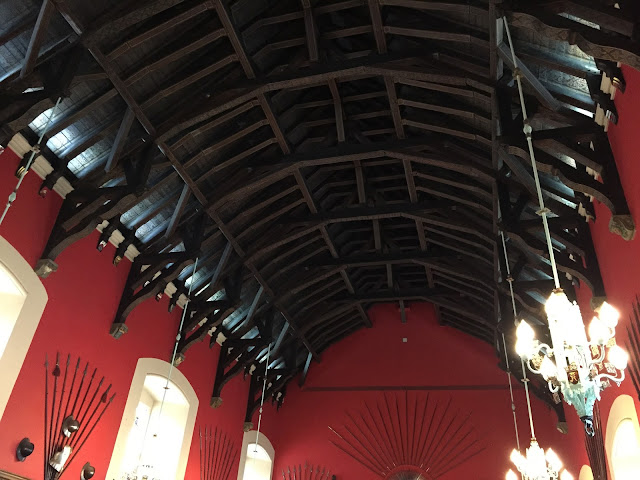 We really wanted to see Edinburgh Castle.  We were leaving the next morning to drive to England's Lake District, spending only one day in Edinburgh, and this was the one thing we really wanted to see. Eric and I are huuuuge history fans, and we wanted to experience that medieval feeling! :)  The castle was built in stages, so some of it was medieval but other parts added on later.  During our walk around, I had a couple times where I thought I was blacking out.  I was reading some plaque or other, and all of a sudden almost fell over, jolting back up.  It was concerning, and at one point I sat down to take a break.  After this happened three times I finally realized what was going on.  I was falling asleep.  While standing up!  That's how tired I was.  I finally started to miss my bed.  Eric was still going strong.  Last night we were looking at our photos and I saw this one (above).  "Where did you take this photo?" I asked Eric.  "At Edinburgh Castle," he told me.  I had absolutely no recollection of even seeing it!  I must have been sleepwalking at the time....... 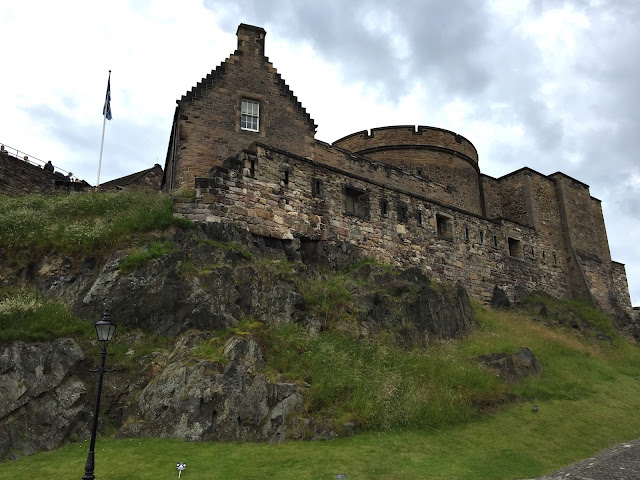 The castle.  The line to get in was monstrous, but there was no wait if you had bought a ticket online.  So Eric grabbed his phone, bought us tickets, and we walked right in.  Smart man. 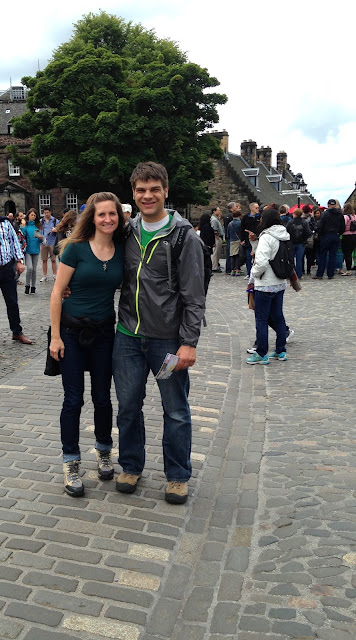 Here we are on the castle grounds.  Am I awake?  Asleep?  Who knows. 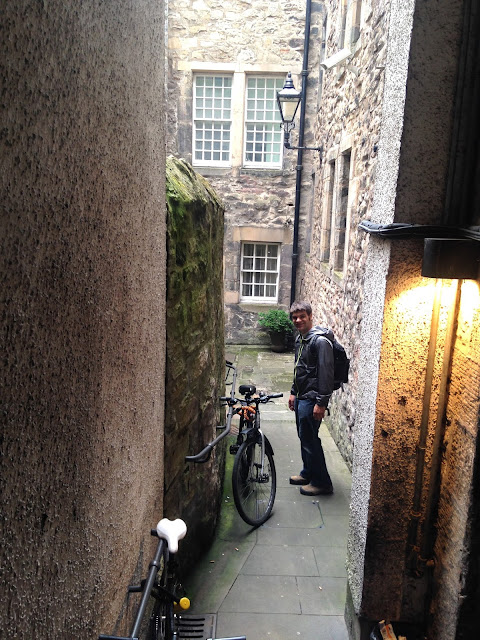 Walking around the city.  There were some really pretty squares and courtyards.  Surprises at every turn. 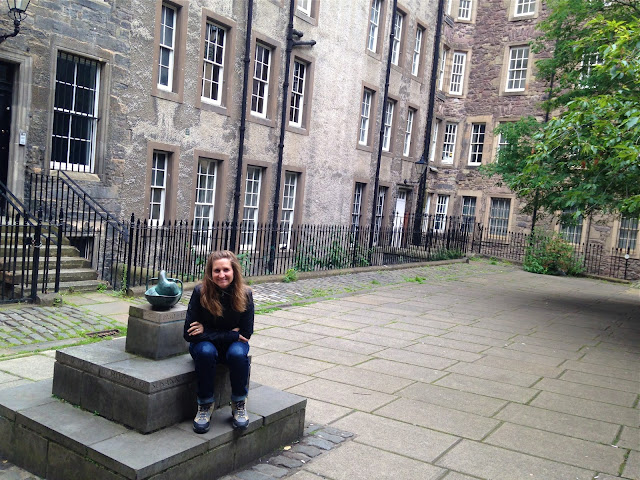 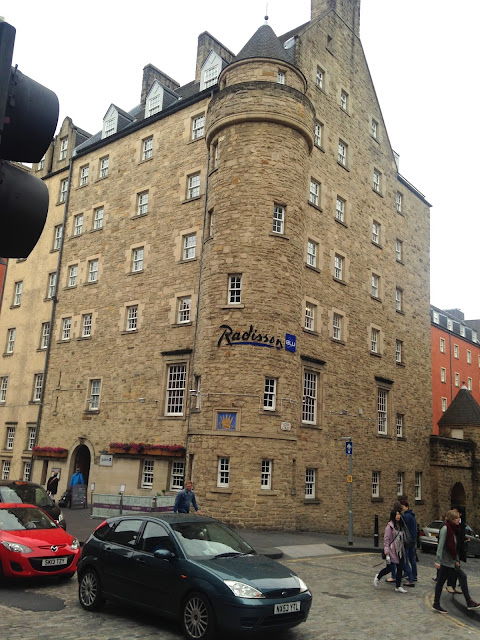 Where we slept, in the middle of the city.  Great location. 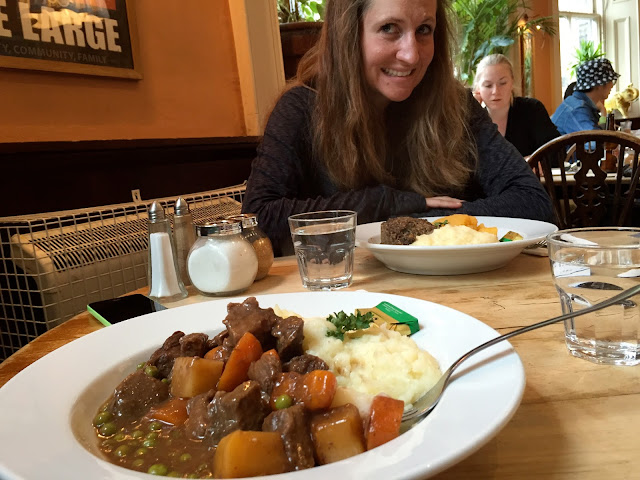 We ate at the Elephant House for dinner, where J.K. Rowling wrote much of Harry Potter.  I  was going to be adventurous with my meals this trip, I had decided that before we left.  So I ordered a traditional Scottish meal of haggis (haggis is made with the minced heart, liver and lung of a sheep mixed with onion, spices, oatmeal, salt and stock, and boiled in the sheep's stomach for a few hours).  It was served with turnips and mashed potato (neeps and tatties).  Kind of like a deconstructed shepherd's pie.  It was okay.  I think Eric got something safe, like a beef stew. 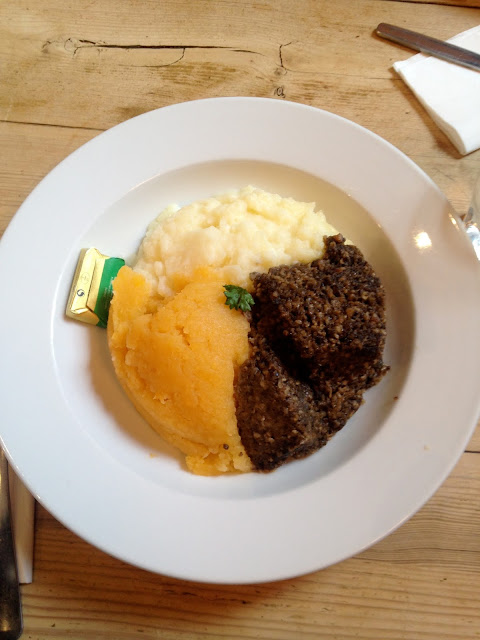 We learned that first night that service at restaurants in Great Britain is pretty slow.  We wouldn't have minded much but I was really ready for bed.  We finally asked for the bill and then made our way back to the Radisson.  Eric wasn't ready to stay in so he went on a walk, but I chose sleep.  I wanted to be ready to go the next morning!!  It was a great first day, and we were excited for what lay ahead.
Posted by Chelsi Ritter at 2:36 PM

Haha! How funny you fell asleep standing up! I can't wait to read about the rest of your trip!

I'm with Sasha, that is so funny about your falling asleep standing up! I bet that bed felt amazing when you finally sunk into it! I can't wait to see more photos!! I loved hearing about you planning this trip, so now to see pictures of it is just so fun!
xo,
Bethany

youre such an adventurous eater! I don't know if I could! Fun Pictures!