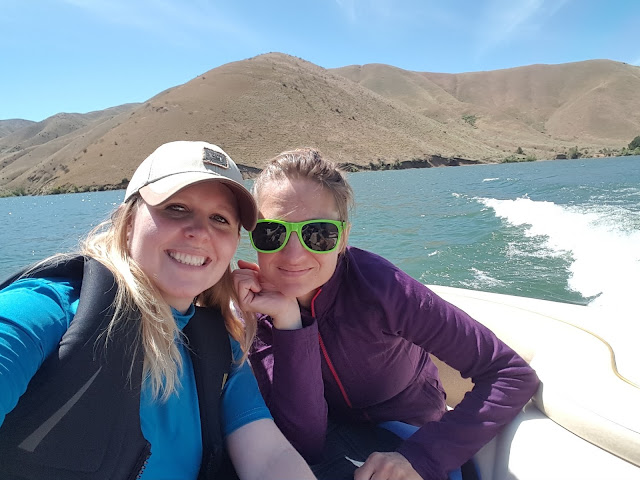 My pictures are all jumbled and I don't feel like putting them in order so I'm going to be jumping around in this post.  A few months ago I got an Android phone, which is my reason for not posting for so long.  After 3 years of owning an iPhone I opted for a cheaper plan and phone.  I have yet to figure out how to download my pictures.  Arg! Finally I just emailed them to myself.
Demri came out recently for a visit.  With her husband Eric in Arizona for the summer she came out for 5 whole days.  I wish she could have stayed longer; it's never long enough! :)  One day Pete and Ami took us up to Lucky Peak with their new boat.  It ended up being the coolest day of the week, but eventually warmed up enough for us to go in the water. 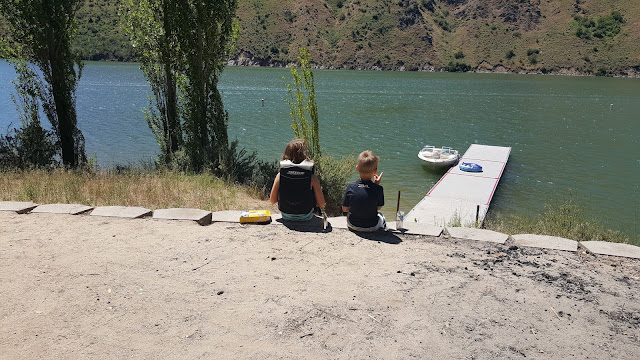 I went on the boat with Eric the first time we took it out to watch him waterski, and Demri stayed on the shore and took some great pictures of she and the kids. 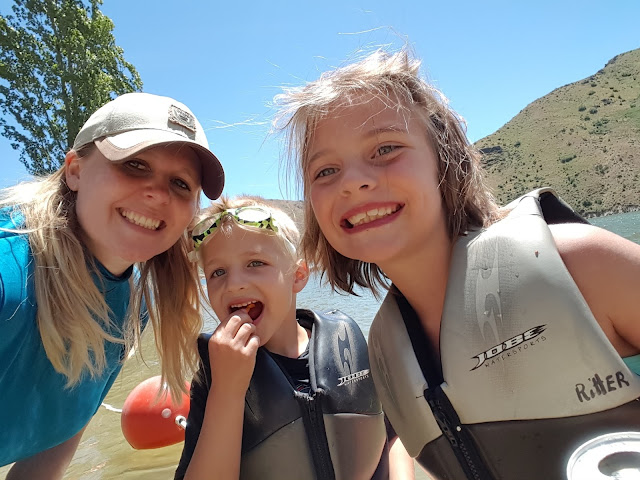 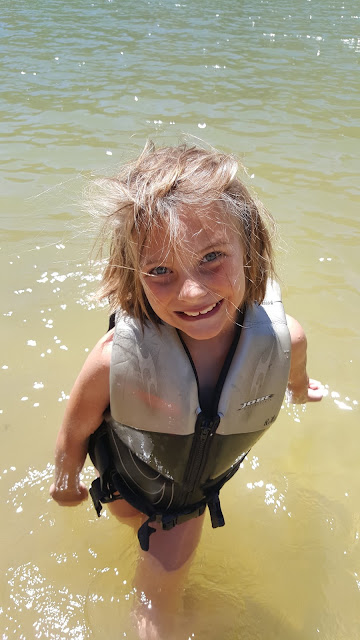 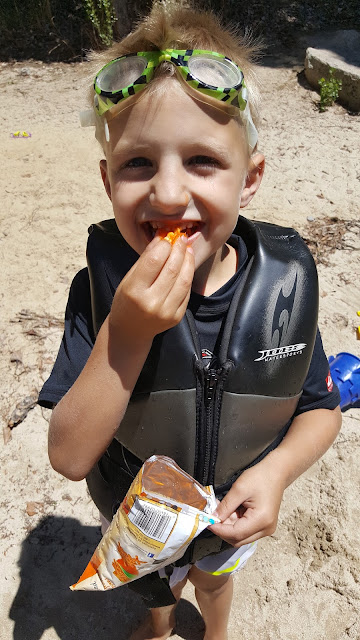 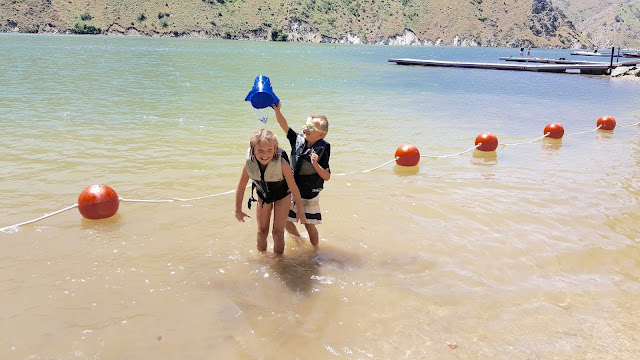 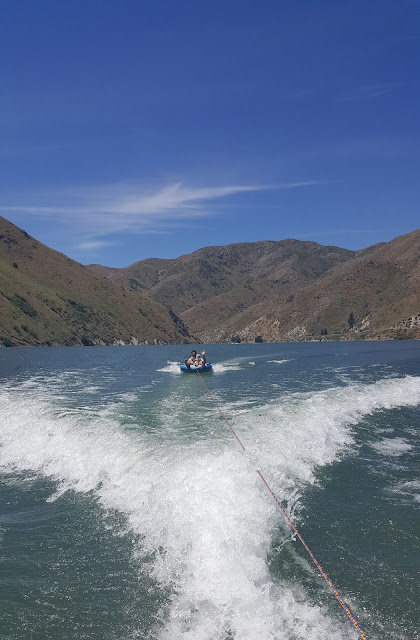 Then we all got in the boat and did some tubing.  Eric rode with Birch, Demri with Aspen, and I rode with Oakley.  Later Aspen and I went out, but she was crazy and eventually I was scared enough to get off.  She is quite the little daredevil, wanting Pete to increase his speed and to ride the waves. Demri is the same way, so they had a great time when they were riding together! 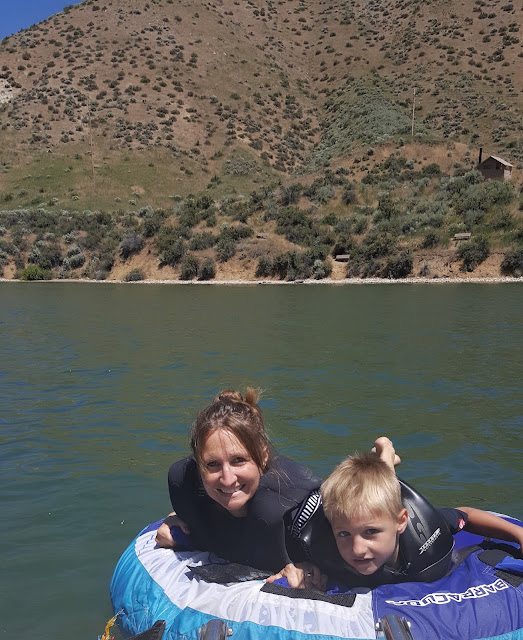 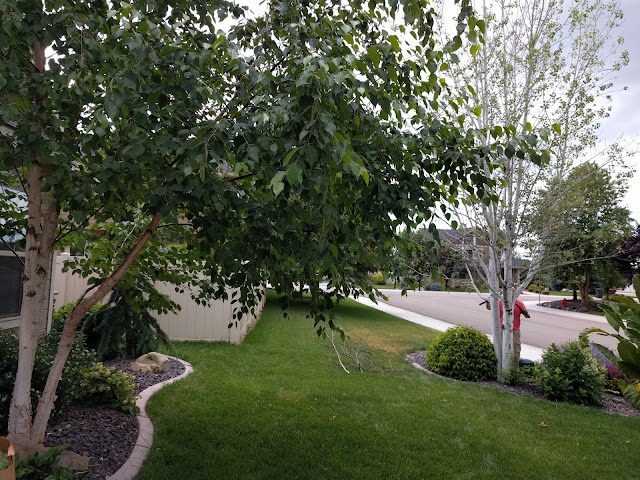 Before Demri came Ian and his kids stopped by on their drive to Utah.  We had planned on going swimming when they were here, but (shocker) that day ended up being rainy and cold.  So strange for Meridian!  We walked around the yard for a bit so I could show him around, and he mentioned some pruning that our bushes and trees needed.  We ran to the store so I could buy some shears, and then I spent the next 2 hours learning about how to take care of our landscaping.  I'm grateful for all Ian taught me and am excited to do some shearing again soon! 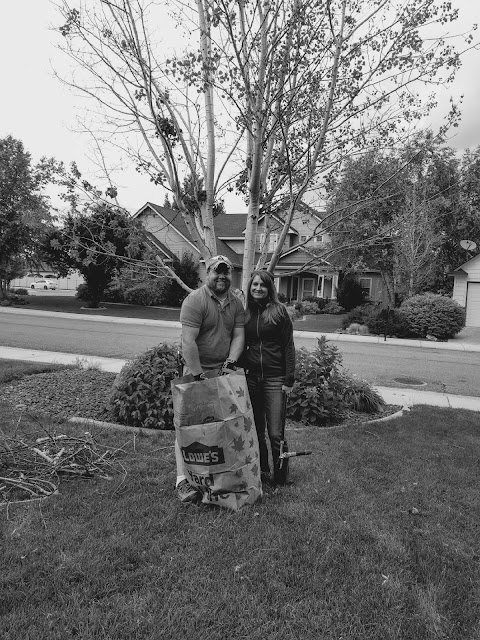 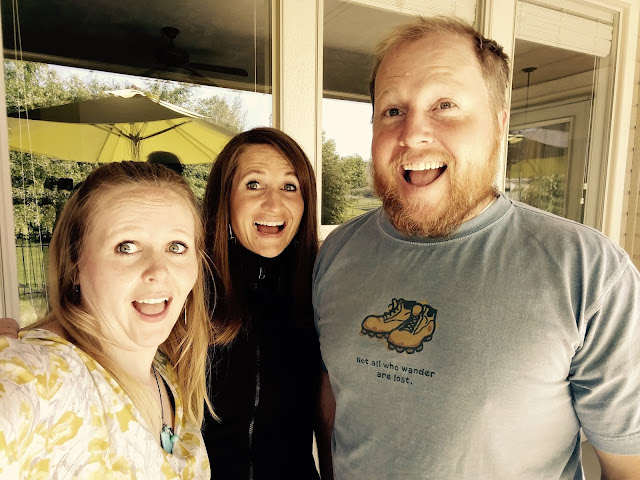 On Ian's drive back to WA he stayed another night with us, and Demri was here too.  How lucky was I?? It was so fun to be together; that night after the kids were in bed Ian and Eric ran and got milkshakes, then we sat at the kitchen table and played cards while sipping them.  Someone started playing random song selections on their phone, and then we all ended up taking turns playing oldies, silly songs or ones we just liked.  The next morning Ian, Demri and I spent some time on the back patio chatting.  <3 p=""> 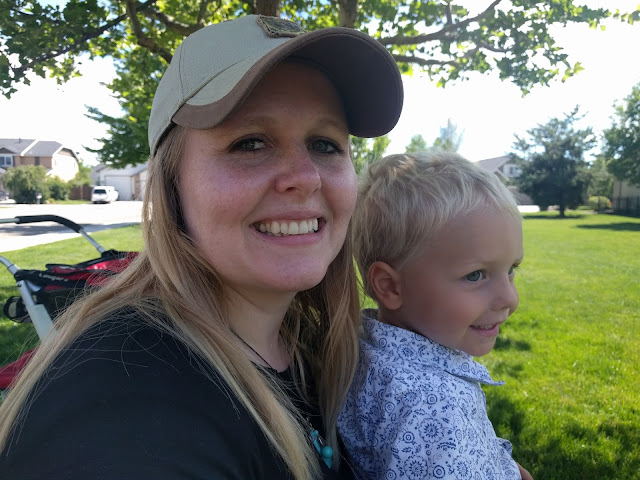 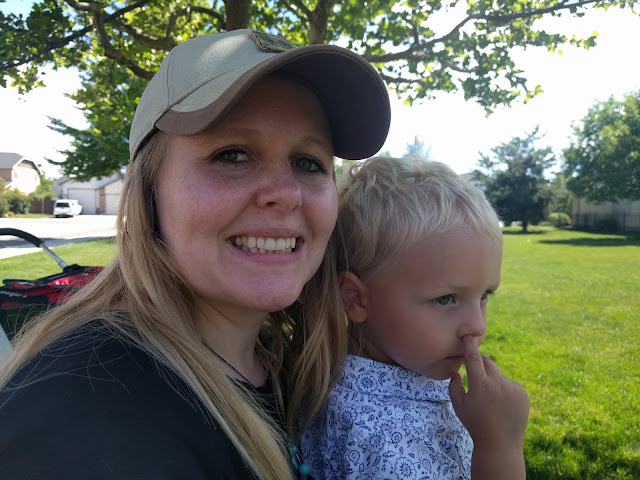 Later that day we spent some time at the park...... 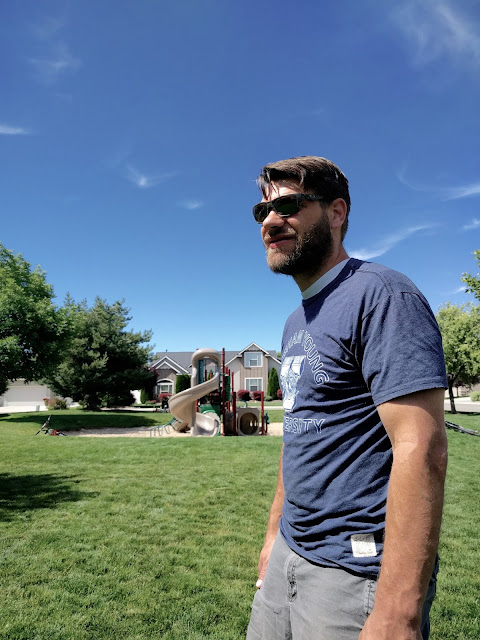 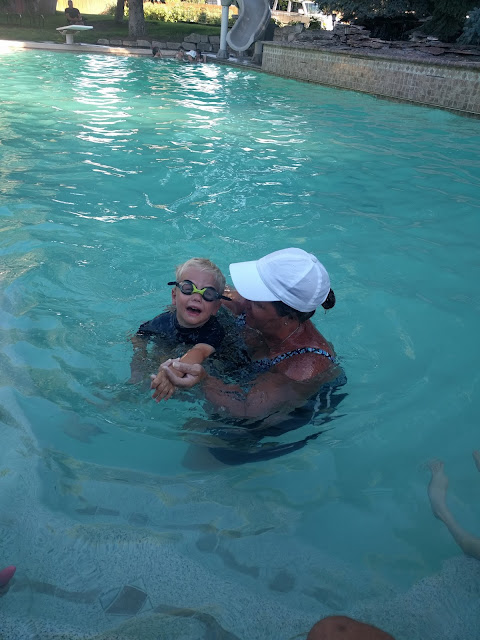 and the kids' swim lessons started that week too.  Last year I could have signed Birch up for swim lessons but he was pretty apprehensive in the water so I decided to wait.  This year I was crossing my fingers when I signed him up.  I just had no idea how he would do.  The first day was Horrible! (See above picture) Birch screamed, refused to go into the water, and wouldn't let his instructor, Karen, go near him.  I felt bad for him and for the other parents trying to watch their own kids swim.  After the lesson I asked Karen what we should do, and she urged us to keep bringing him. She was confident he would eventually get into the pool.  The next day the lesson began with Birch crying again, but this time he let Karen take him into the water.  Ten minutes later he was smiling, and two days later he was putting his head under water and jumping off the diving board!  He thinks he knows everything now, and may be even more of a water bug than his sister.  I took him swimming the other day and only lasted about an hour because I was so exhausted trying to keep up with all his demands: "I can swim all by myself!"  "Put me in the star (inner tube)!"  "Take me out of it!"  "I want to swim over there!"  "I can do it by myself!"  Phew!  He used to be content to just hang out in a tube; not anymore.

The day Demri left we went to Scentsy for lunch.  Demri got a tour of Eric's department and office, which was fun because it had been a while since we'd been there.  Thanks for a great time Dems. 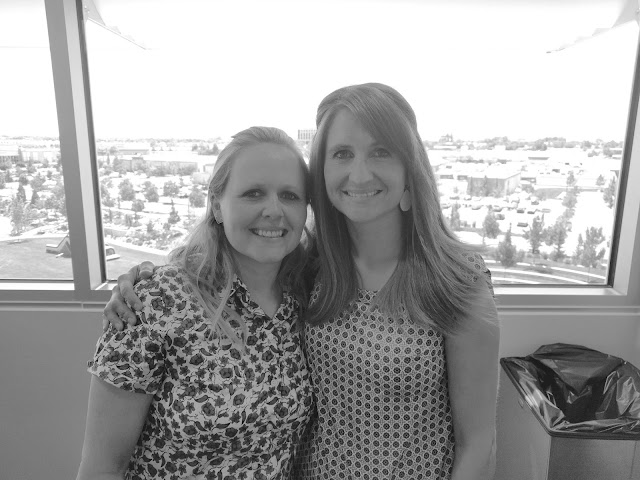 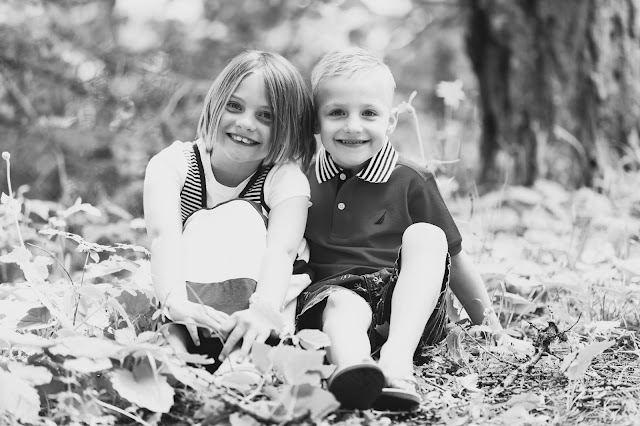 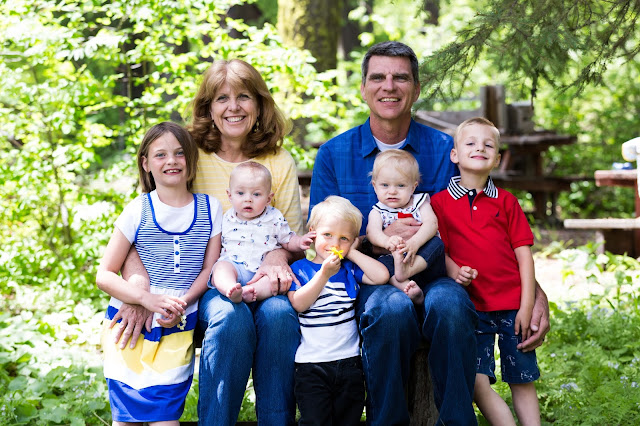 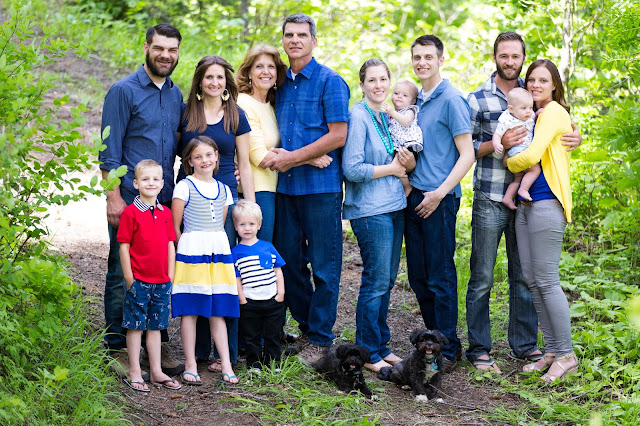 Posted by Chelsi Ritter at 3:23 PM

What a fun post full of the faces I love to see! :) So glad you got so much time with Ian and Demri! Every time I see Aspen's smiling face I think about how much Selah would love to pal around with her on a regular basis. And I can't get over how much Oakley looks like a Cornelius. So handsome.
Love you!!

Thanks Bethany. The girls would have so much fun together! ;)