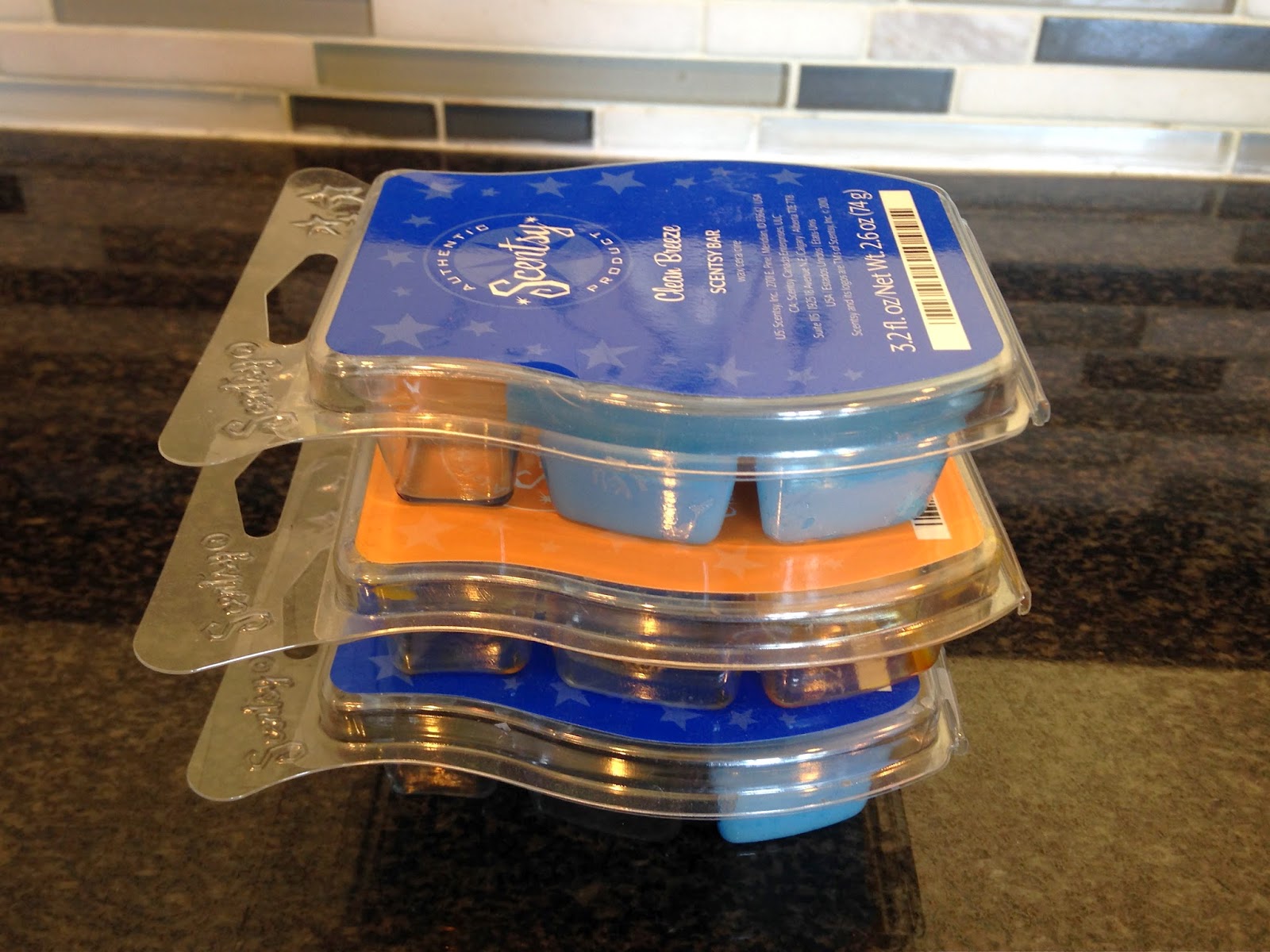 The other day I realized I was out of Scentsy wax.  I've had a bunch of it in a cupboard in the kitchen, and had finally run out of my supply.  I sent Eric a list of Scentsy bars I wanted, and then decided to just peek in the cupboard one more time to see if there were any scents up there.  Well there were 3 of my favorites still left, and in one of them went into the warmer.  Now I've got "ocean" warming until our new order arrives.  I just love how our house smells when we've got a bar in the warmer! 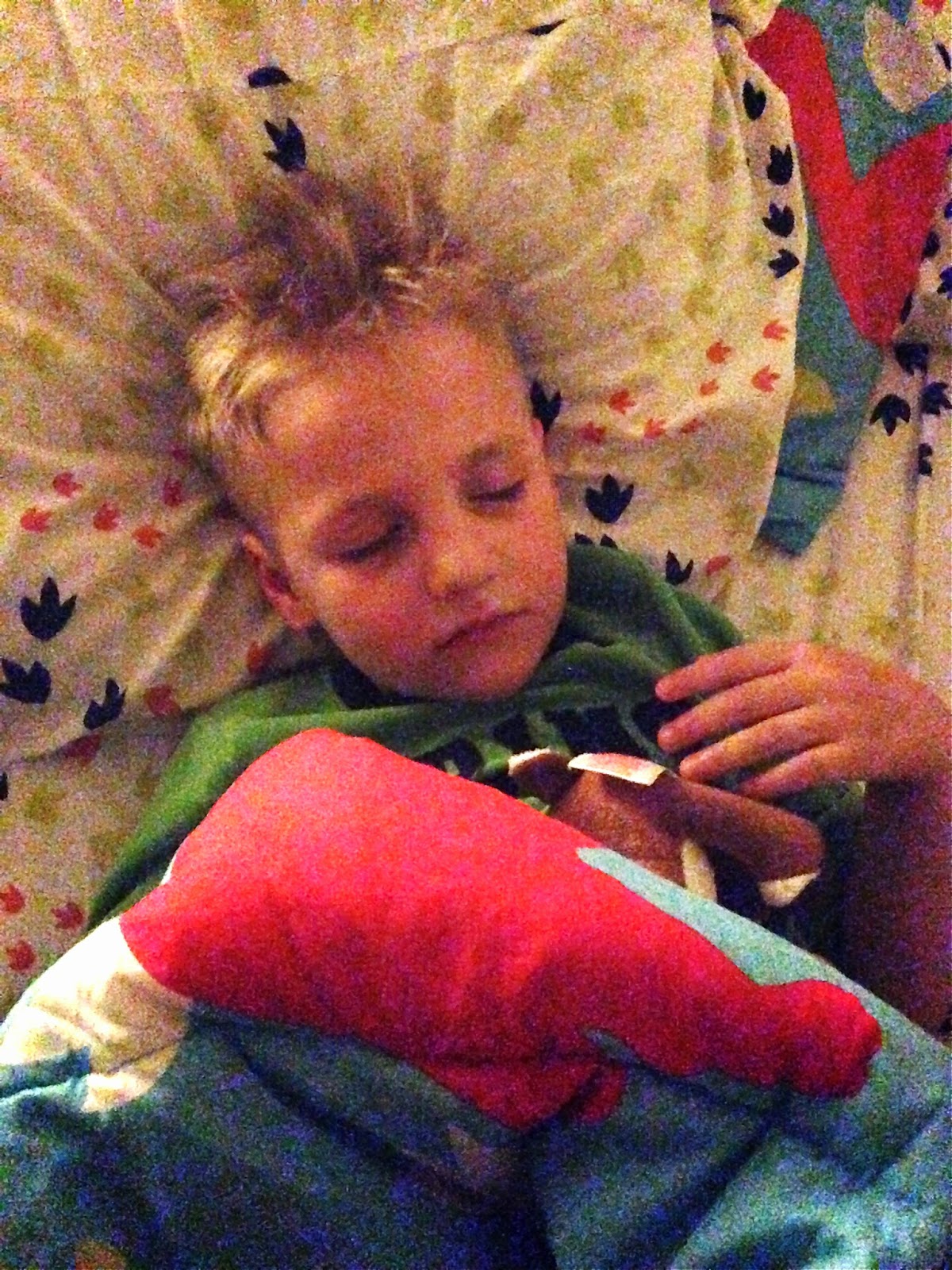 Oakley begs us to cuddle him every night at bedtime, and since I don't want to create a bad habit I usually say no.  However one night Eric pointed out that he may not be wanting us to cuddle him for much longer.  That changed my mind and we've been taking turns cuddling him to sleep every night. He's usually out in a couple minutes once he lays still.   It will be sad when he gets too big to want to cuddle any more :( 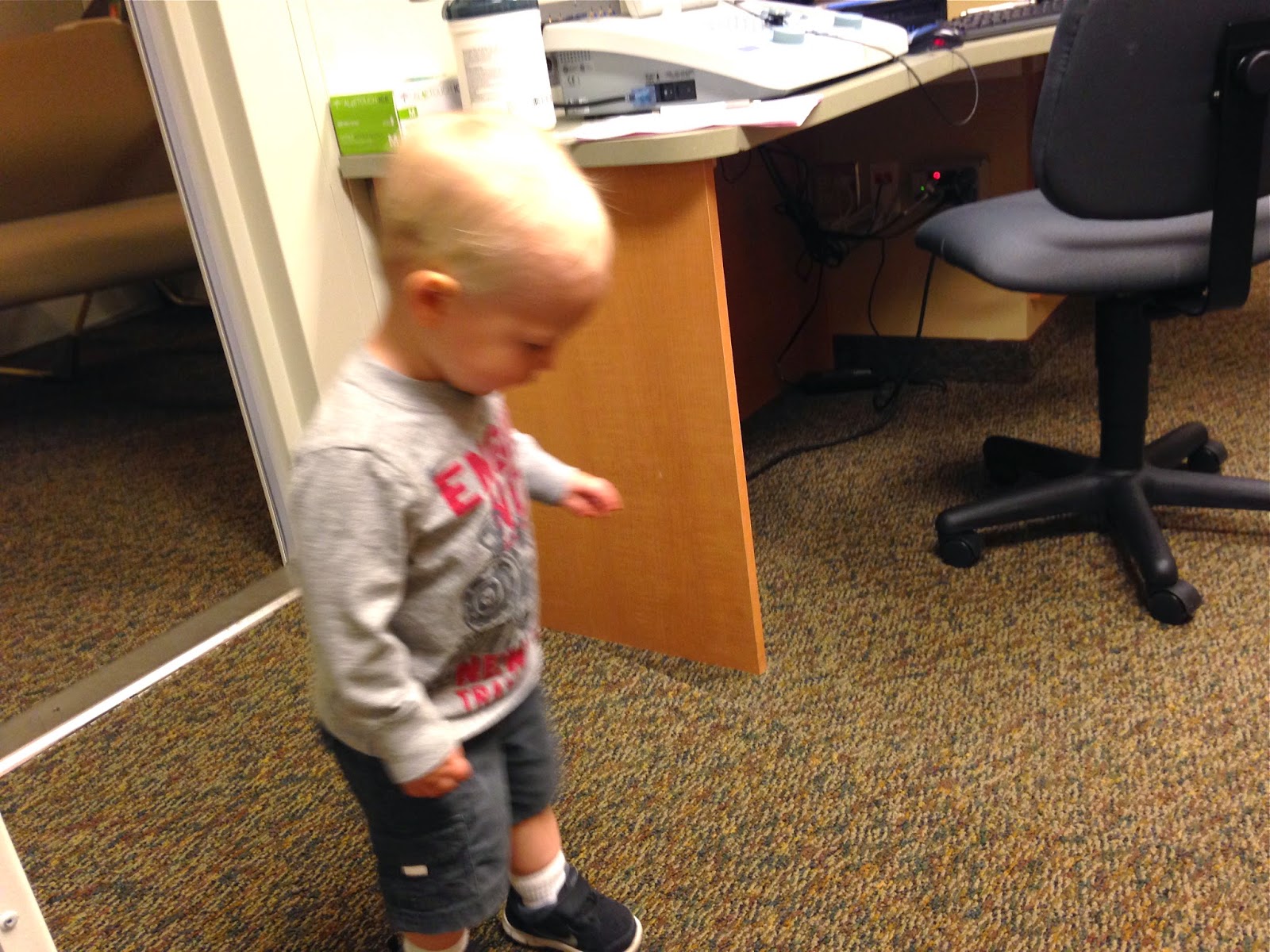 The other day I took Oakley to an appointment at the St. Luke's Hearing and Learning Center.  Eric and I are concerned about his speech; his only problem is that he doesn't pronounce some of his letters.  He passed all the tests with flying colors (so we know now that his hearing isn't the issue), and Birch entertained himself almost the entire time by walking up and down a ramp that was inside the room.  Attention all health clinics and hospitals:  all you need to entertain children is a nearby ramp, forget the toys, books and movies! 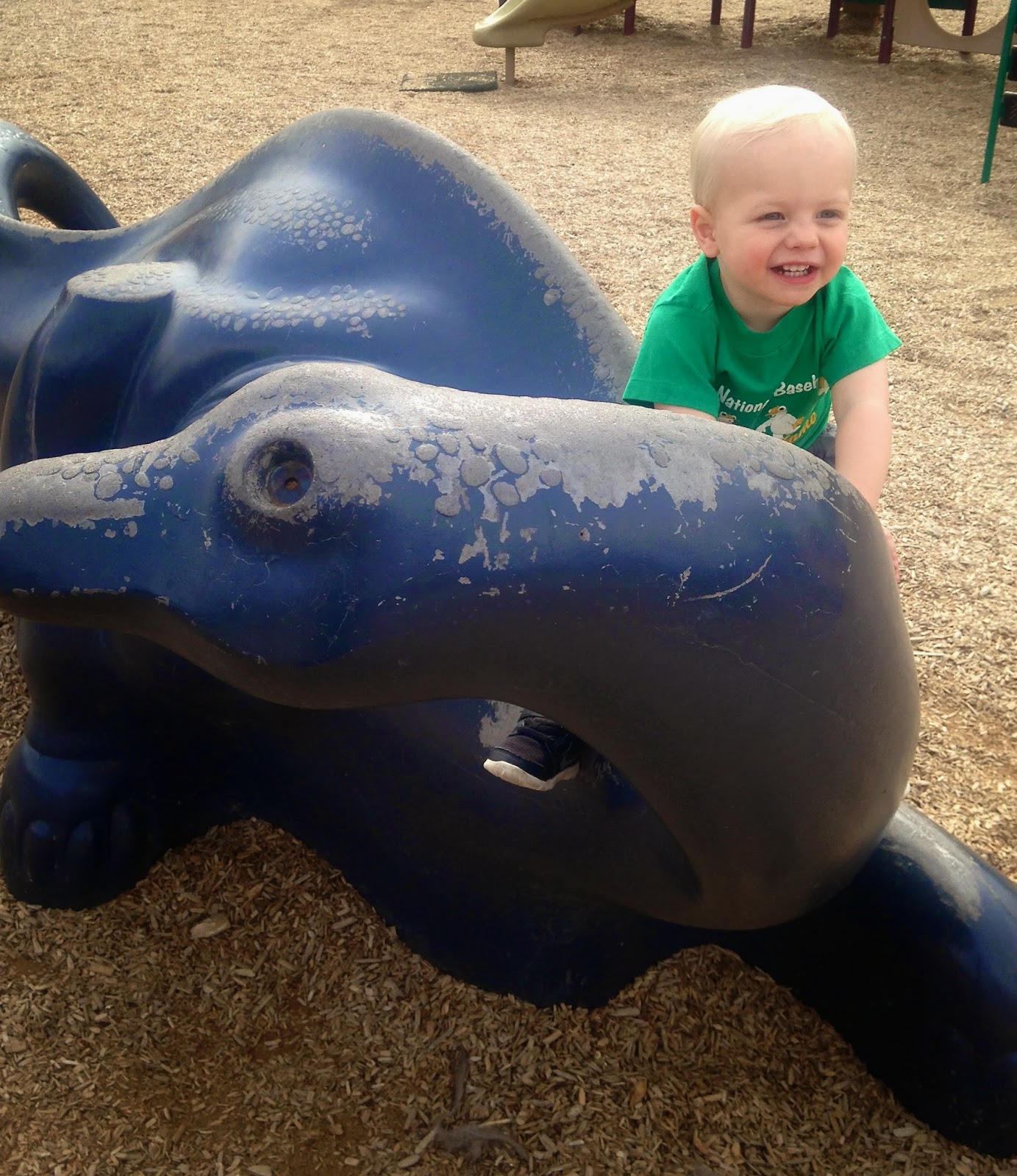 We met some of our friends at the park the other day; a park we don't get to very often because its further away, but its one of my favorites.  The playgrounds are really nice, there's lots of room for the kids to run, and the river is close by.  Birch is content to just do his own thing, which I think is so cute.  When Aspen was little she wanted me to do everything with her.  Then Oakley came along, and while he loves it when I play with him, he's great on his own.  I'm surprised Birch is like Oakley that way, maybe even more so.  Its fun watching him do his thing and wonder what's going on in that adorable, perfectly shaped toe head of his. 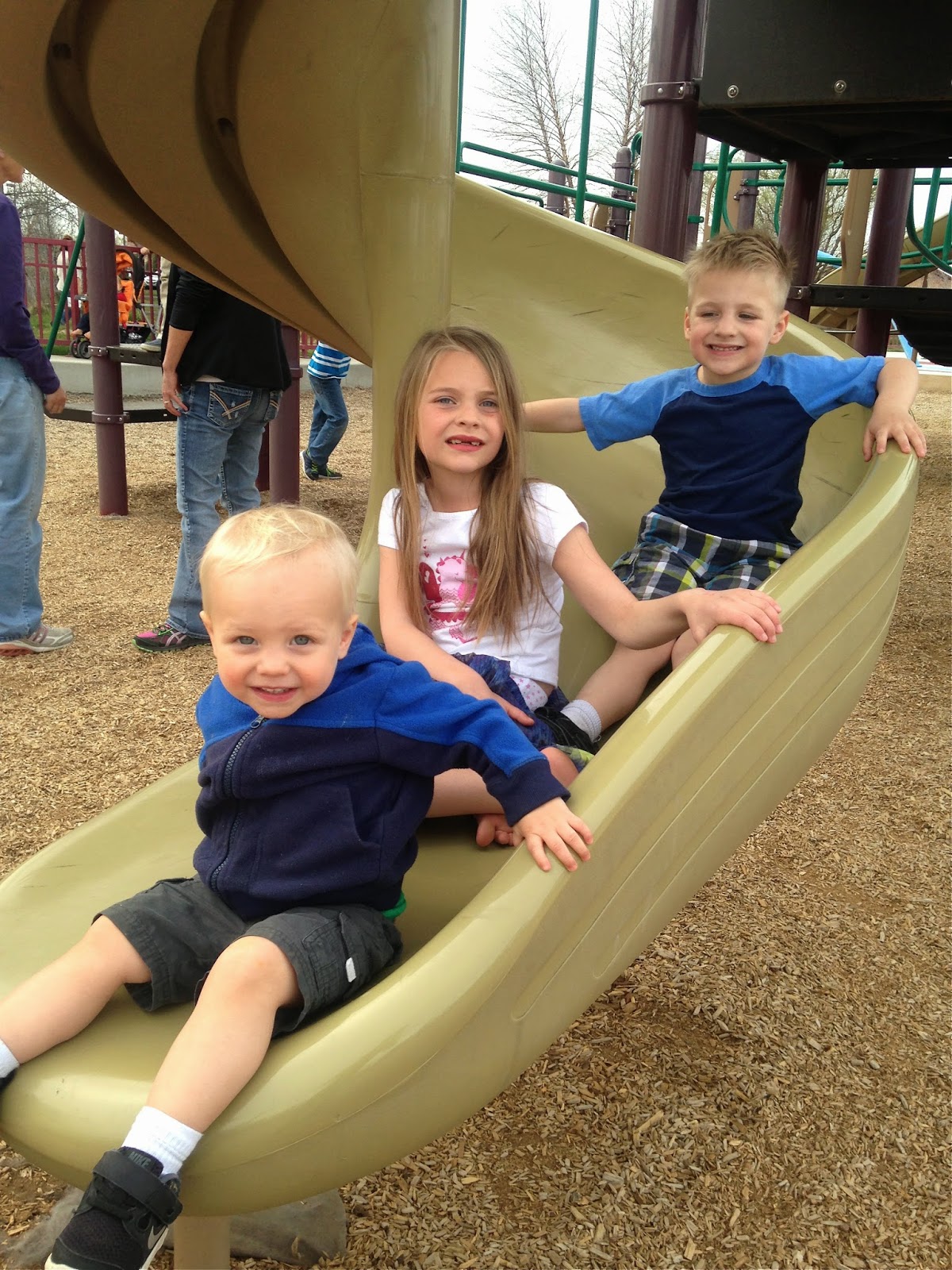 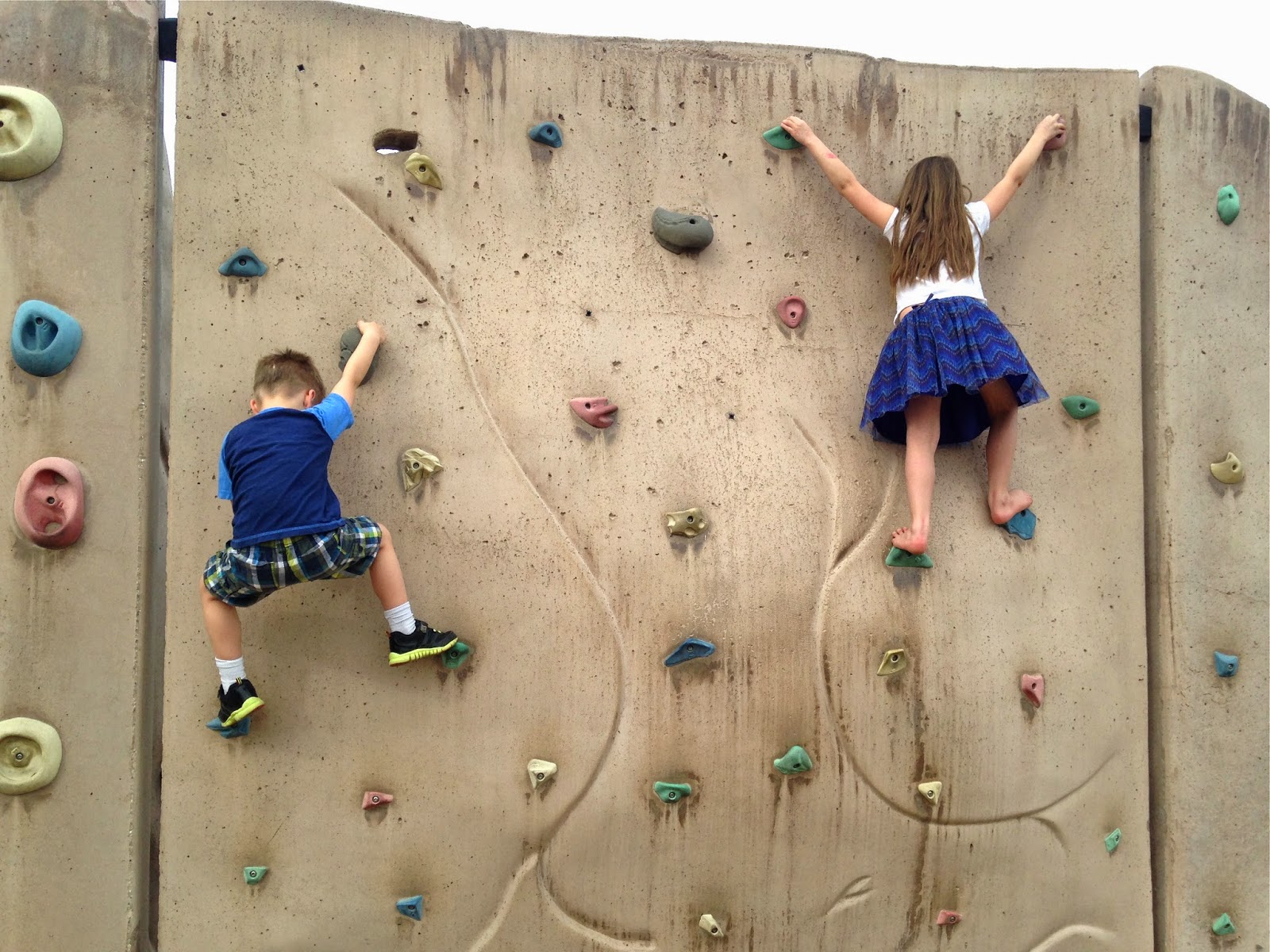 This looks really impressive, but the truth is I helped the kids up to the top.  I made sure they were steady and okay with me stepping away to take a photo. 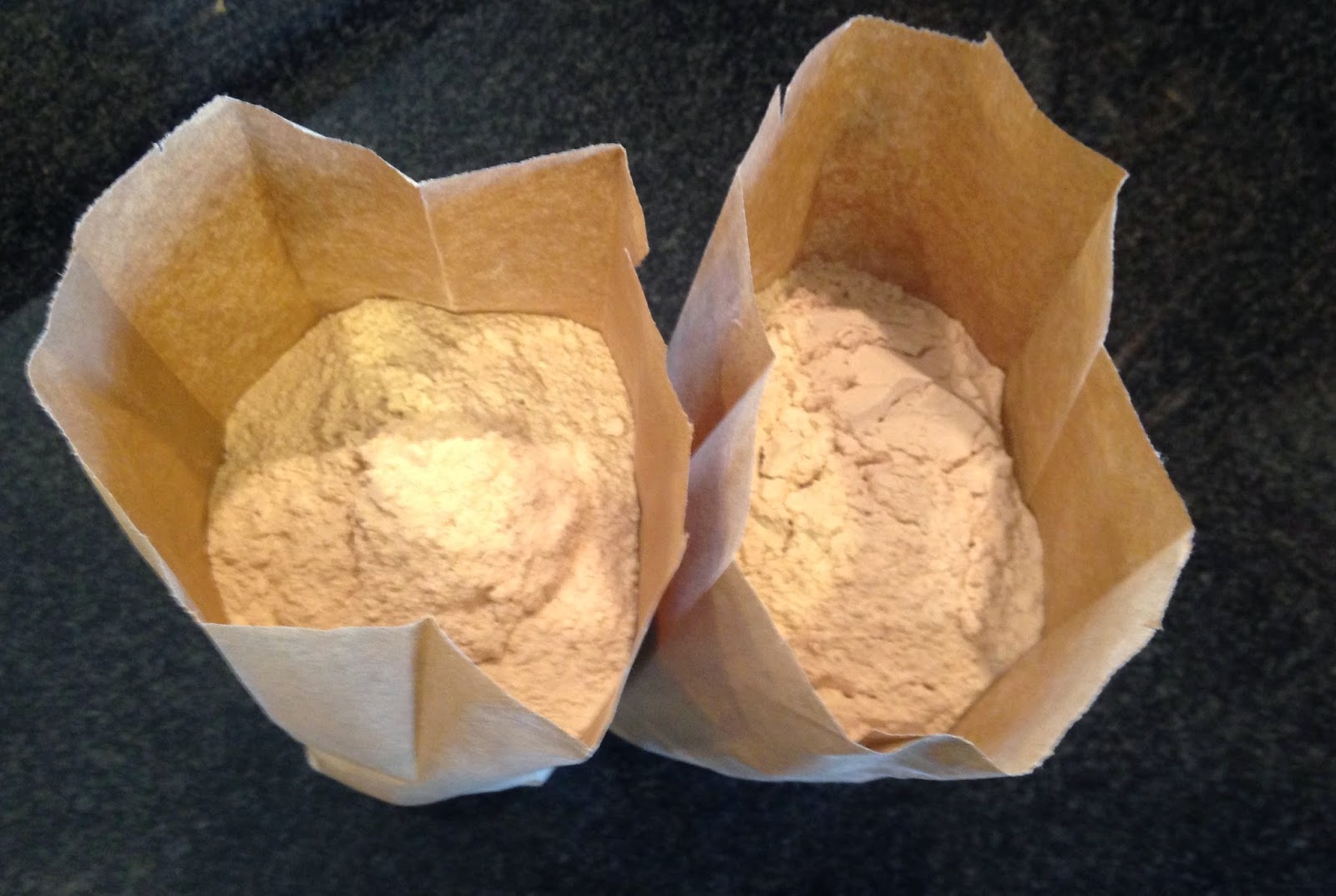 Sunday breakfast has become our "let's eat as many calories as we can" meal.  I say that in jest but it really is true.  We have afternoon church now instead of morning, so that makes all this possible.  It started out when a friend gave us a can of Pillsbury cinnamon rolls, and we had them one Sunday morning for breakfast.  They were delicious!!  They're nothing like cinnamon rolls from scratch, but they are cheap, quick, and fun for a Sunday morning.  Then we graduated to the Rhodes frozen ones, which are delectable, but expensive.  So last Saturday I ground up the rest of our wheat and made some French bread, and we had French toast the next morning.  Yum!  Later church is a blessing in so many ways :) 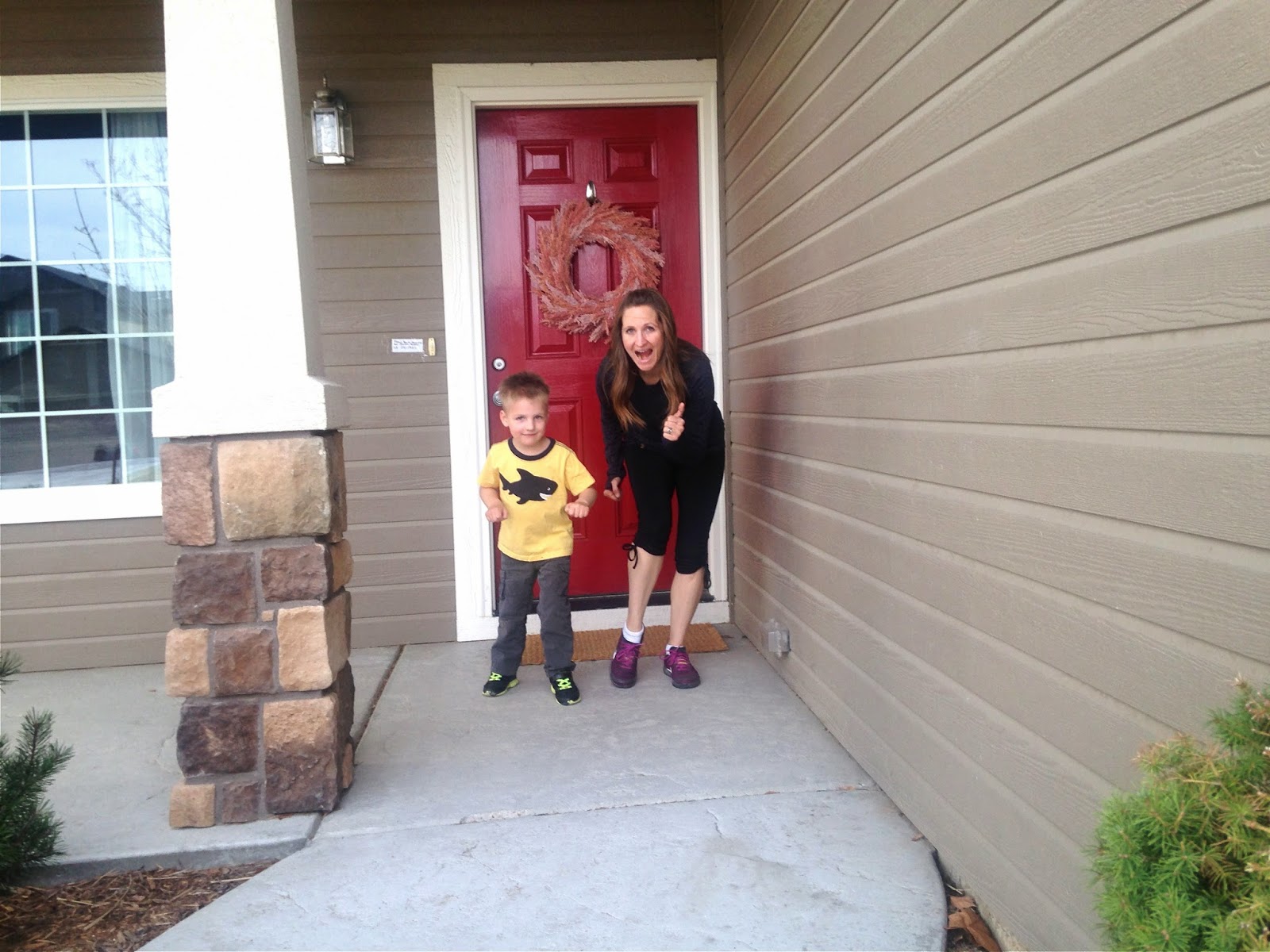 The kids love to go "running" with me.  I find it amusing because we get about a block down the street and they are panting and needing a rest.  But its so cute and I love that they want to join me. Saturday Oakley and I went out and I told him he could slow down as much as he wanted, but to try not to stop; he did really well.  My kids will turn into runners yet!!  Photo courtesy of Aspen. 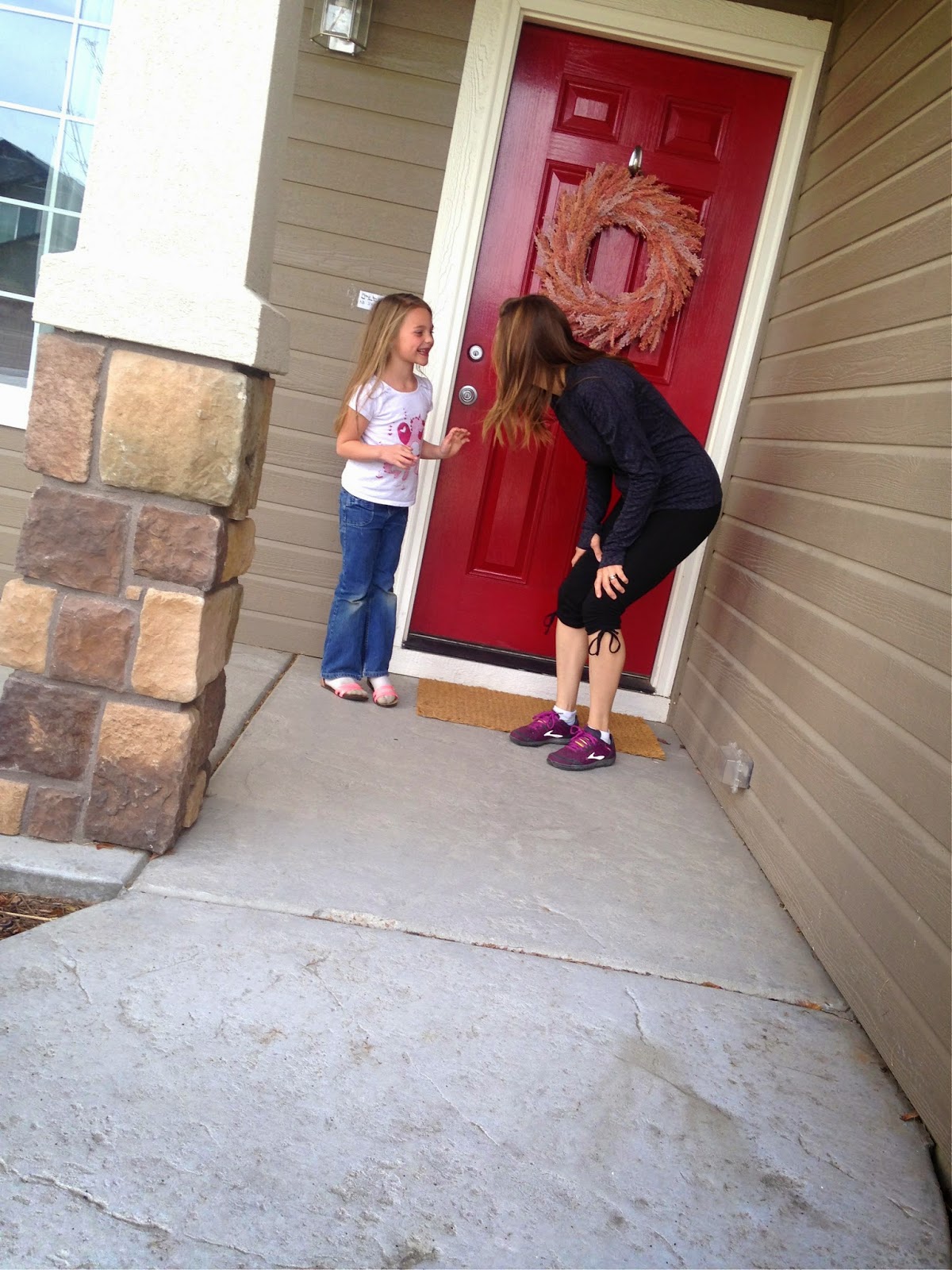 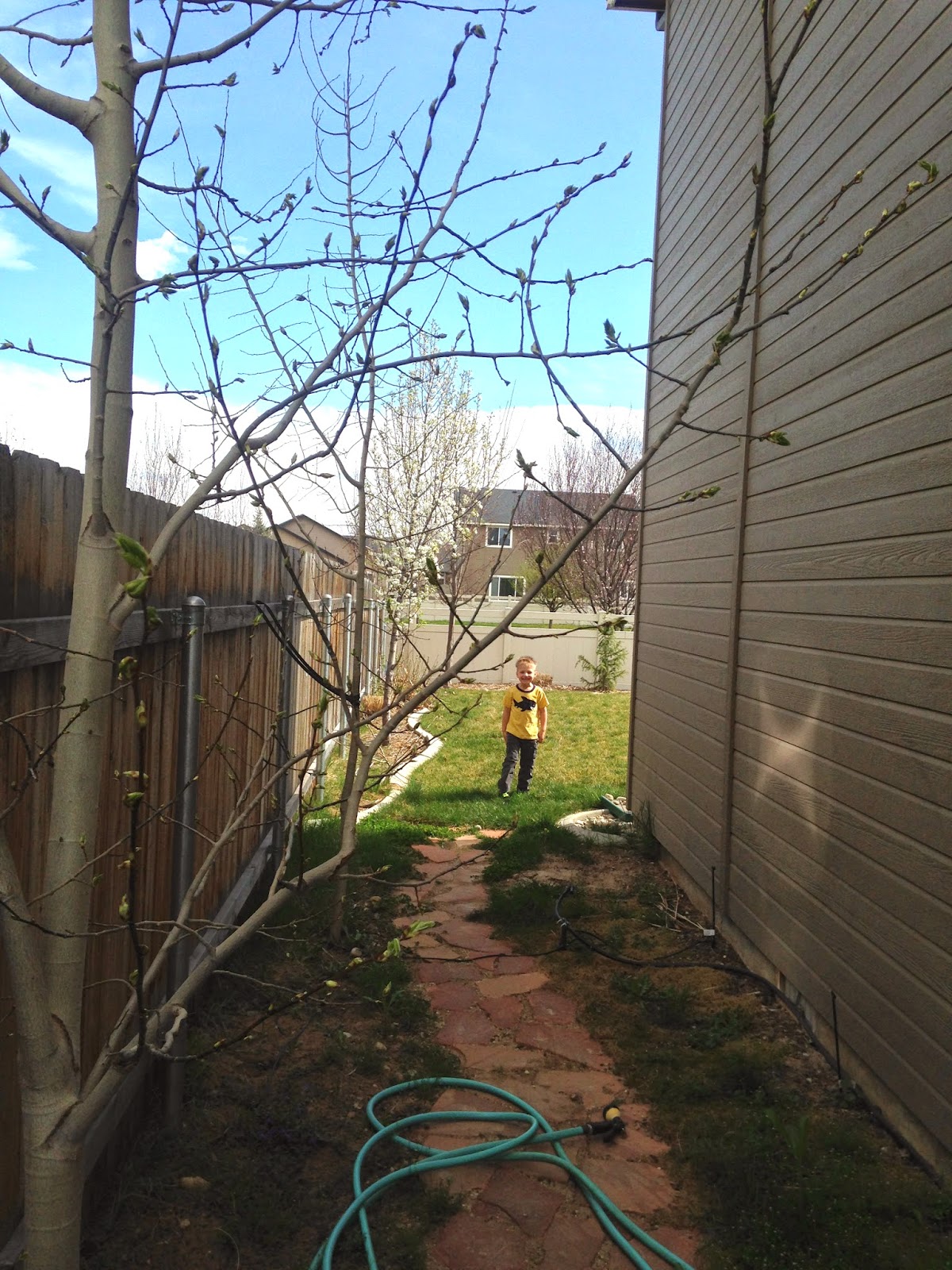 Now that its Spring I guess we need to start doing yard work.  Sigh. 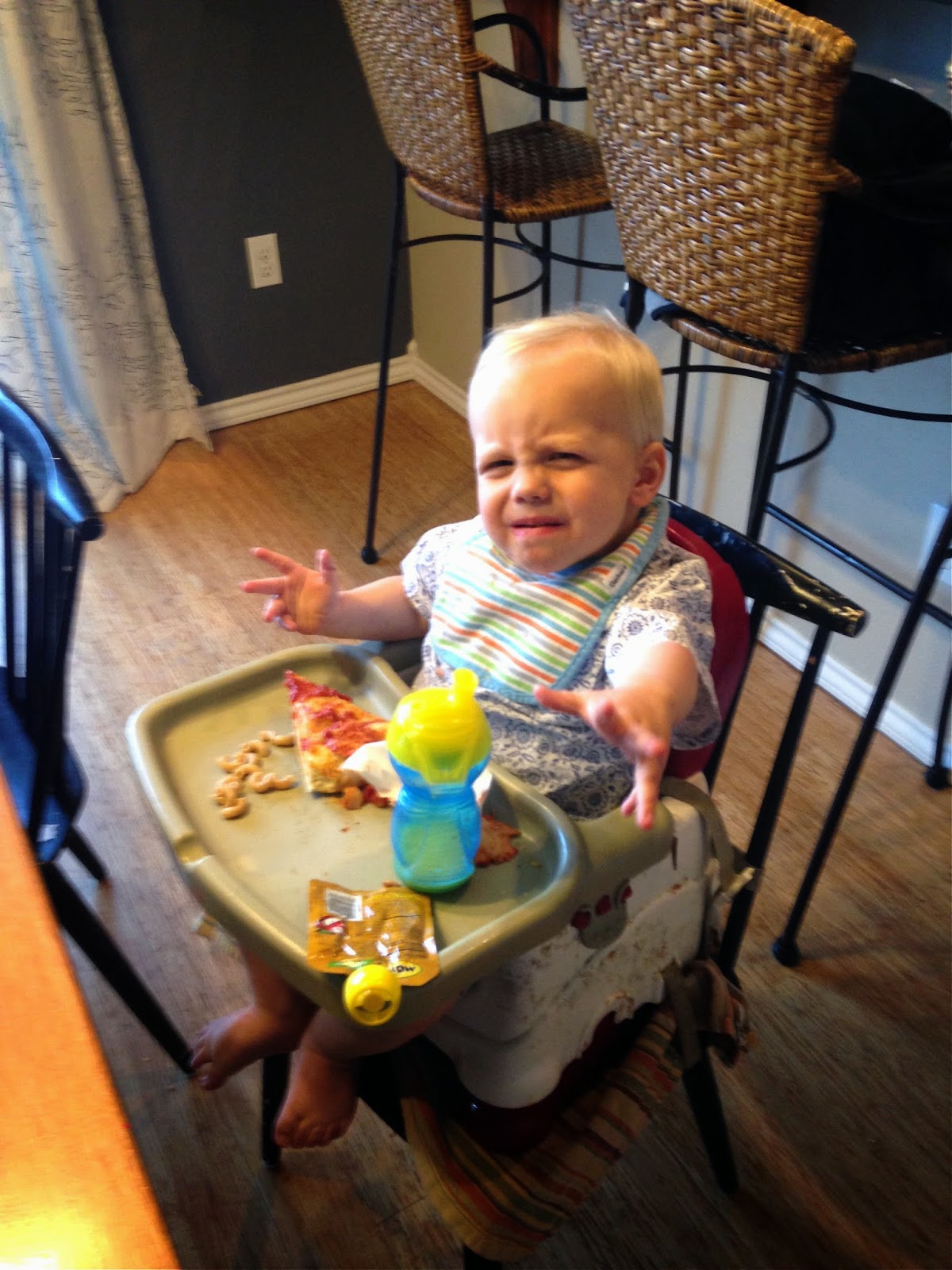 Birch has become quite the little miss priss, although I don't know how.  The other day we were playing with blocks and I noticed he had a little chocolate on his pants, so I wiped it off, though it was still visible.  I mentioned it (big mistake), and it was all Birch could think about for the next 20 minutes.  "Look at this tower Birch!  Help me knock it over....""Birch!  Let's drive your car through this tunnel...." But all he could do was cry out, "chocolate!  Chocolate!" and swipe at it, while tears were running down his cheeks.  This picture above is of him being very distraught that his little hands are dirty.  Yikes :) 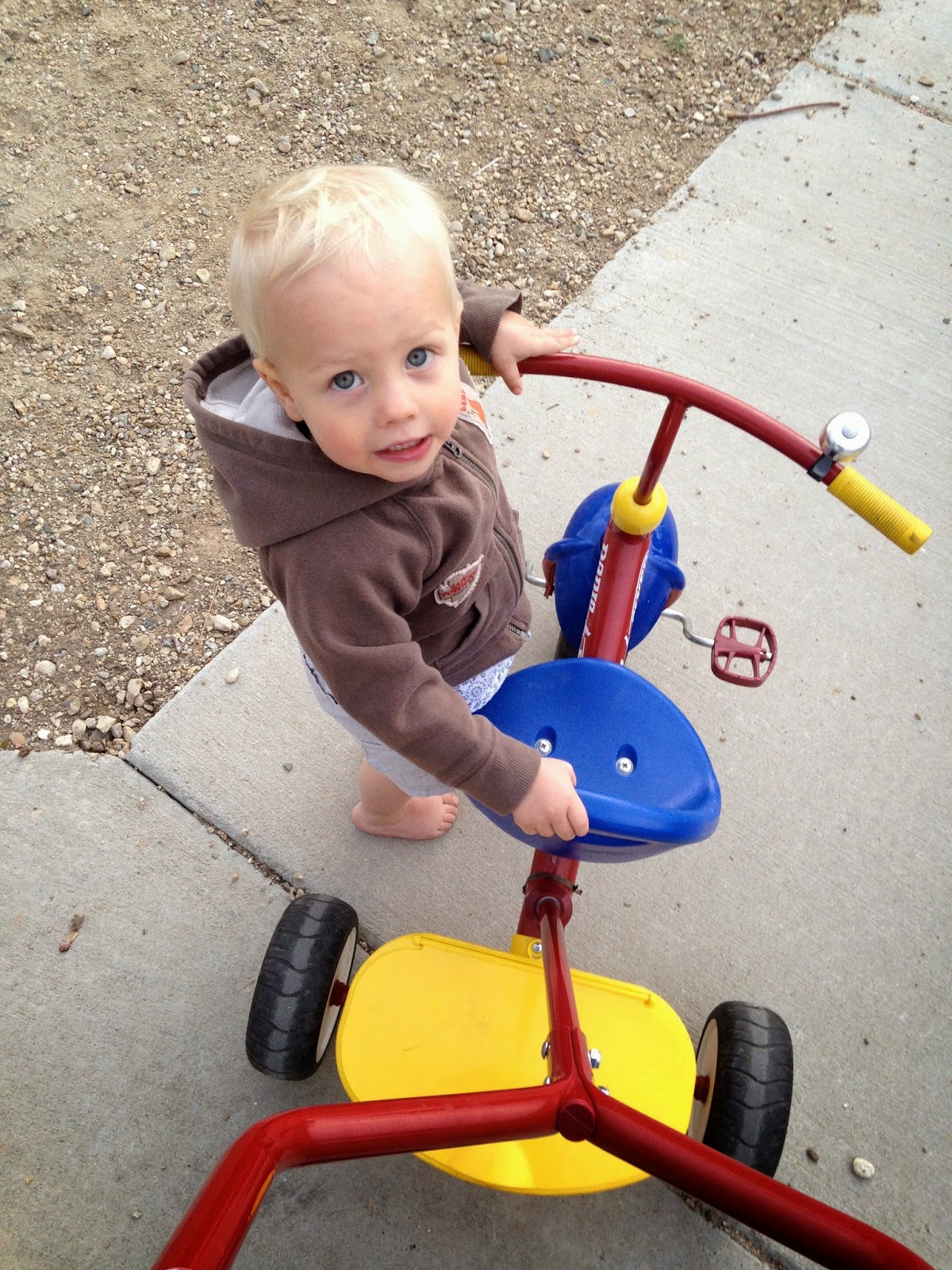 We try to get out in the evenings when we can, now that the weather is so lovely, and take the kids at least around the block before bedtime.  We have a large open green area behind our house that the kids like to run and ride their bikes in.  We only have neighbors on one side, and a park across the street.  We found a great house. 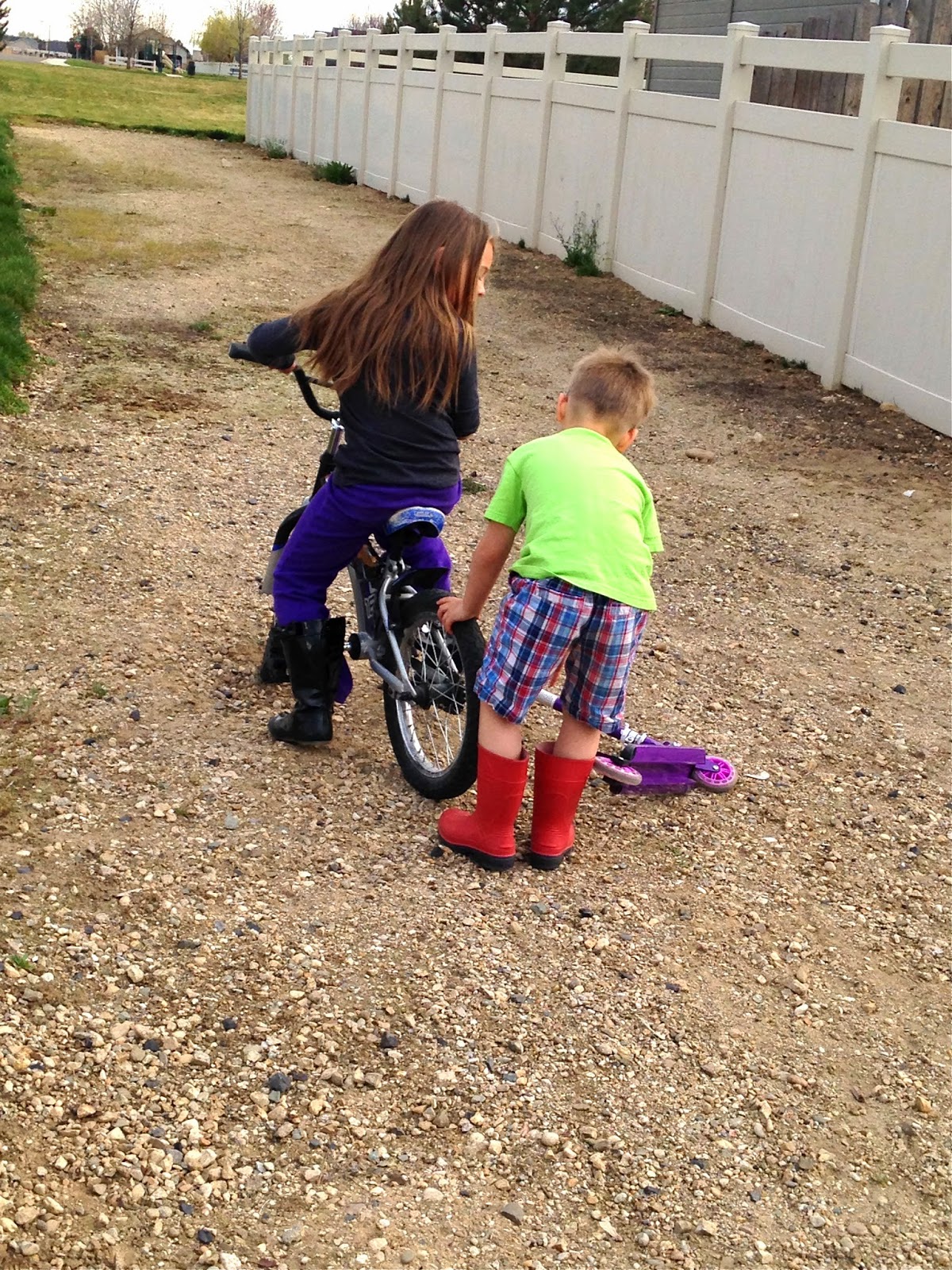 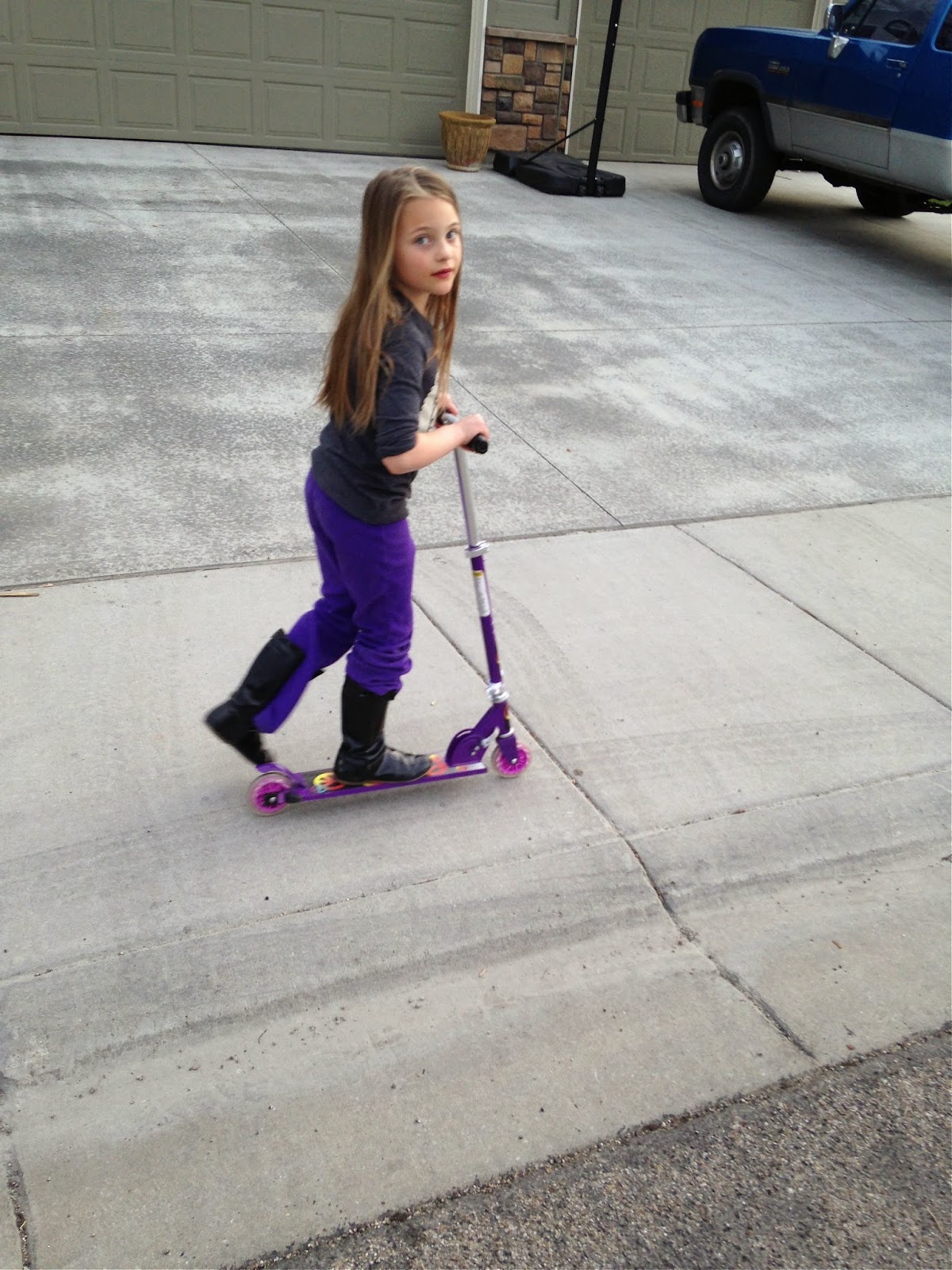 I had to take this picture because I was laughing so hard as we went around the block.  After the kids changed out of their church clothes Aspen ran outside wearing this.  It was so nice and sunny, and she put on her long sleeve shirt and fleece "comfy" pants, which she tucked into her black boots.  But what really made me laugh is that she left one of her boots unzipped, so that whenever she ran or pushed her scooter the boot flapped all over the place.  "Aspen, zip up your boot!" I kept saying to her, through my tears of laughter, but she never did.
Posted by Chelsi Ritter at 4:13 PM

That's funny about Birch being a germaphobe. Ezra is the same way.

I sympathize with your kids; I only last about a block, too, when running with you. You kick my trash.

Yeah, Saturday mornings are our overindulge in breakfast mornings. Glad we're not the only ones.