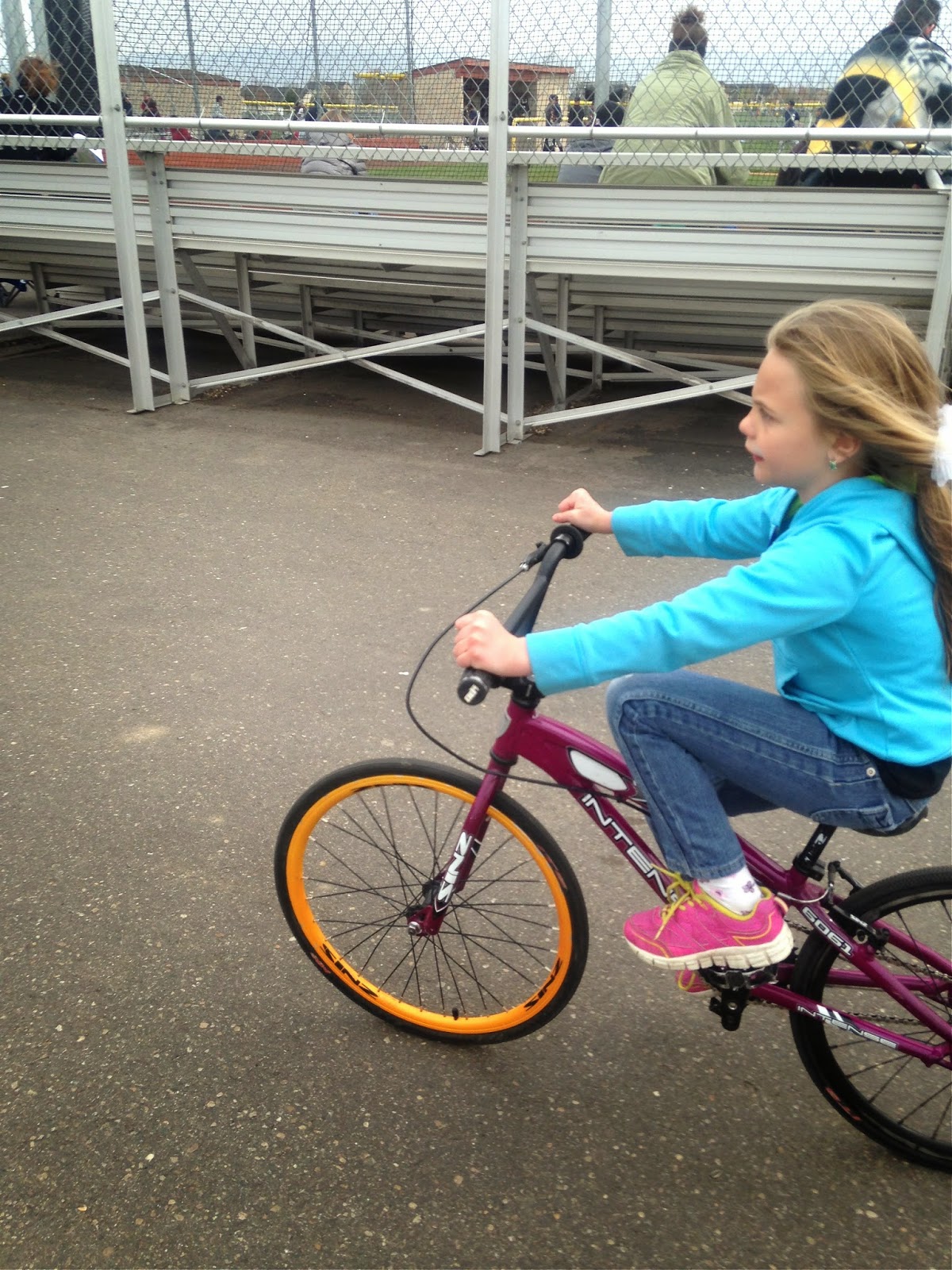 Aspen joined me one Saturday recently for a run; she rode her bike.  It was fun but also practical: every time I felt myself getting tired I would ask her to pedal faster so I would push myself.  She looks so cute on her bike.  She rides it in a really relaxed pose, regardless of her speed. 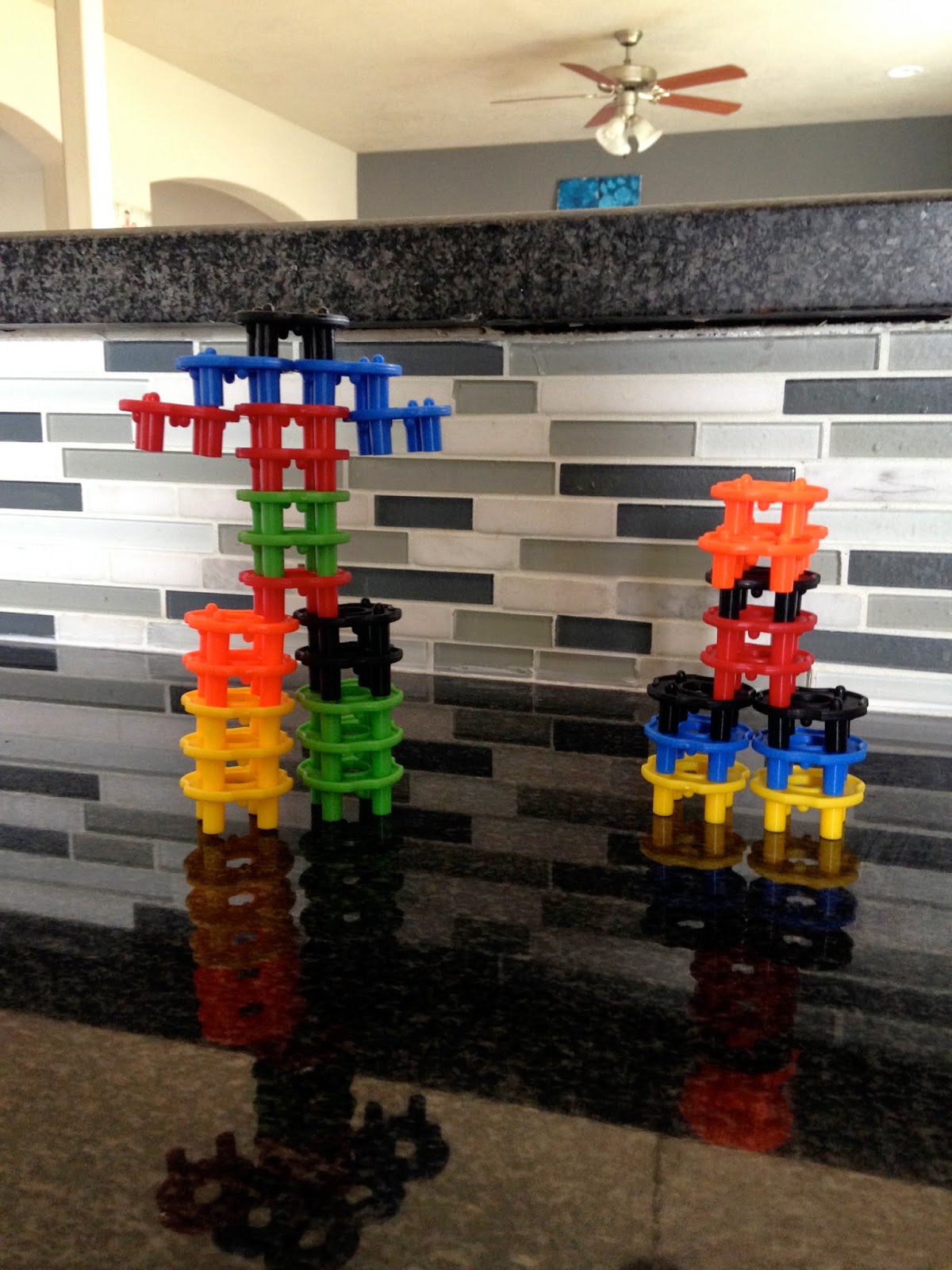 Oakley brought down these blocks after his quiet time one day and told me they were him and me. He is so creative! 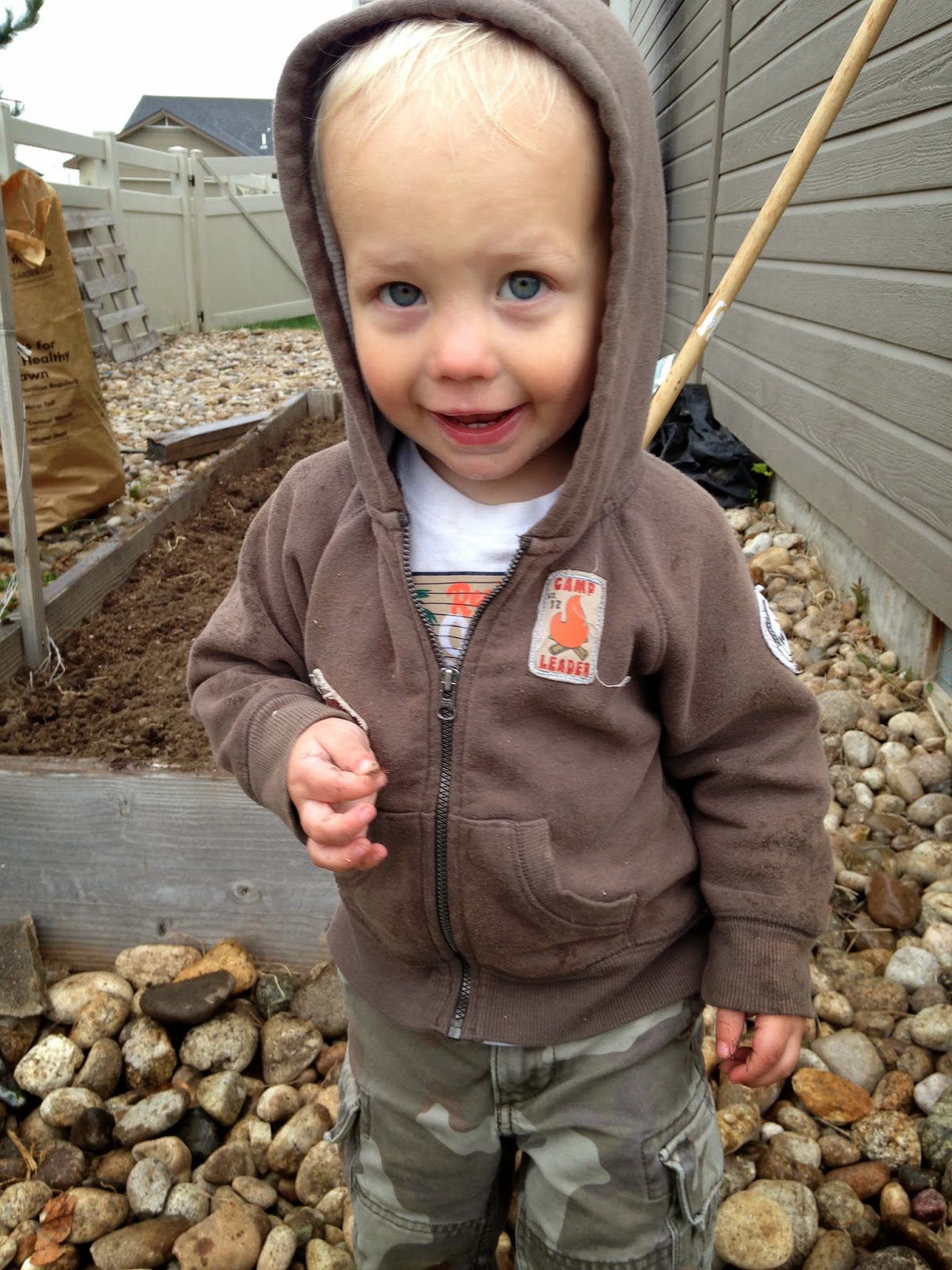 Eric and I buckled down one Saturday morning and decided we were going to work in the yard.  It was getting almost past time to plant peas, which are by far the thing we eat the most from our garden each year.  The day we picked was drizzly and brisk; really perfect actually, except that we all got a bit muddy. 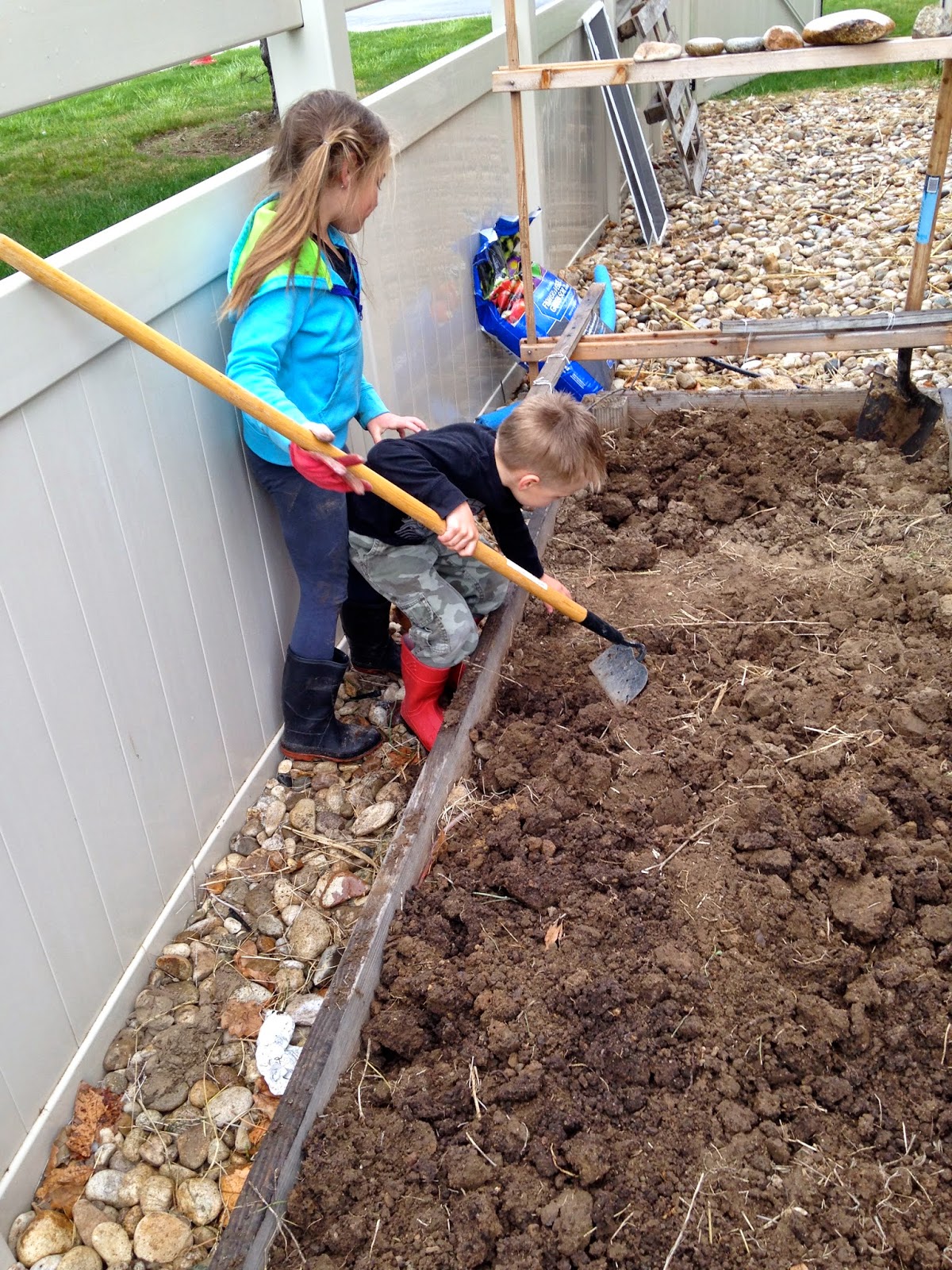 The kids were really helpful; Eric and I do not love working in the yard, we do not have green thumbs, but we love the way our yard looks when we've put in some hours.  It's one thing I wish I enjoyed more.  Maybe now that the kids are getting to the stage where they can help a bit more it'll be better.  It was great being together; I remember how much I hated weeding when I was a kid, but I always fondly remember that time that we spent in the garden together. 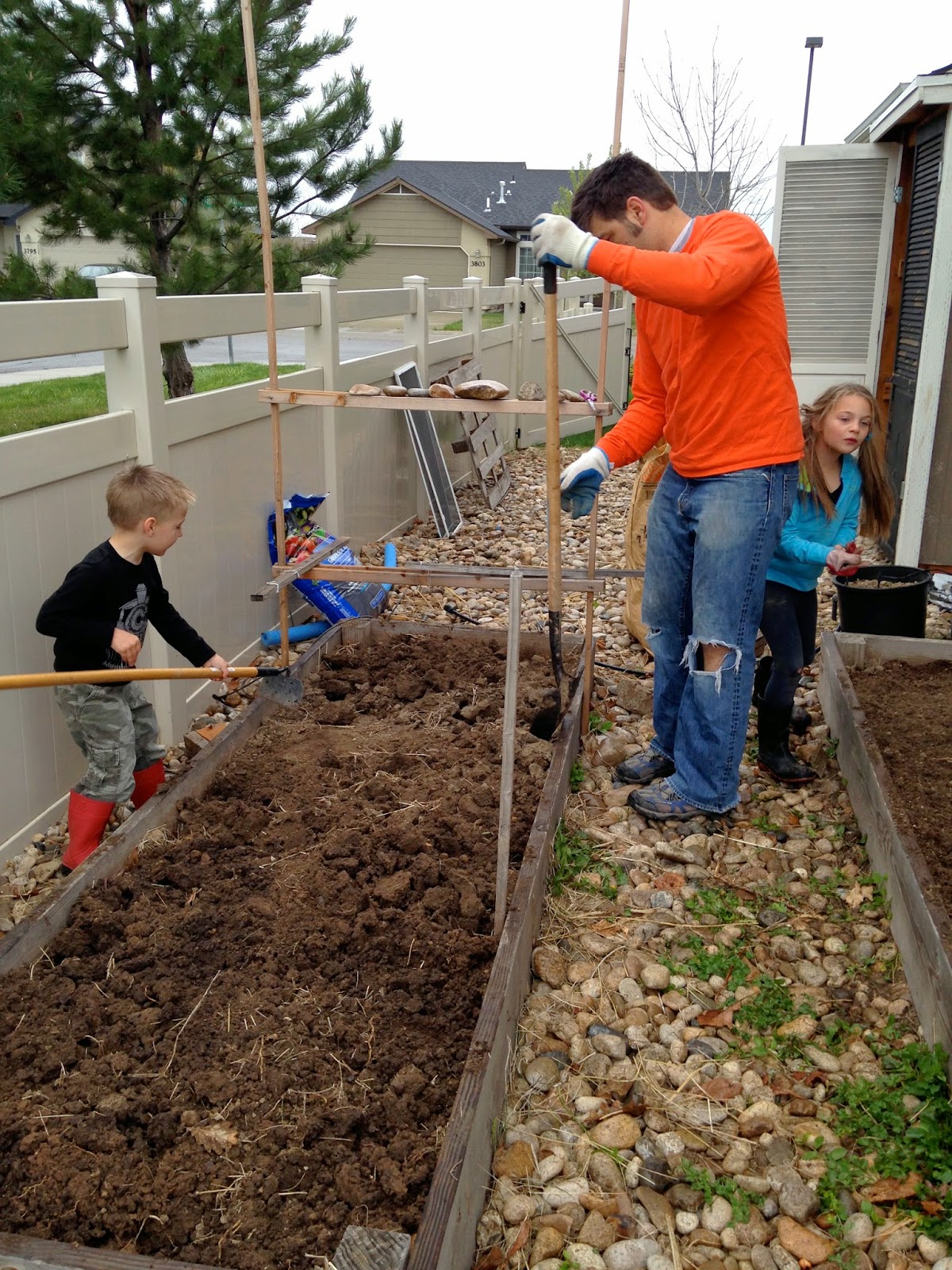 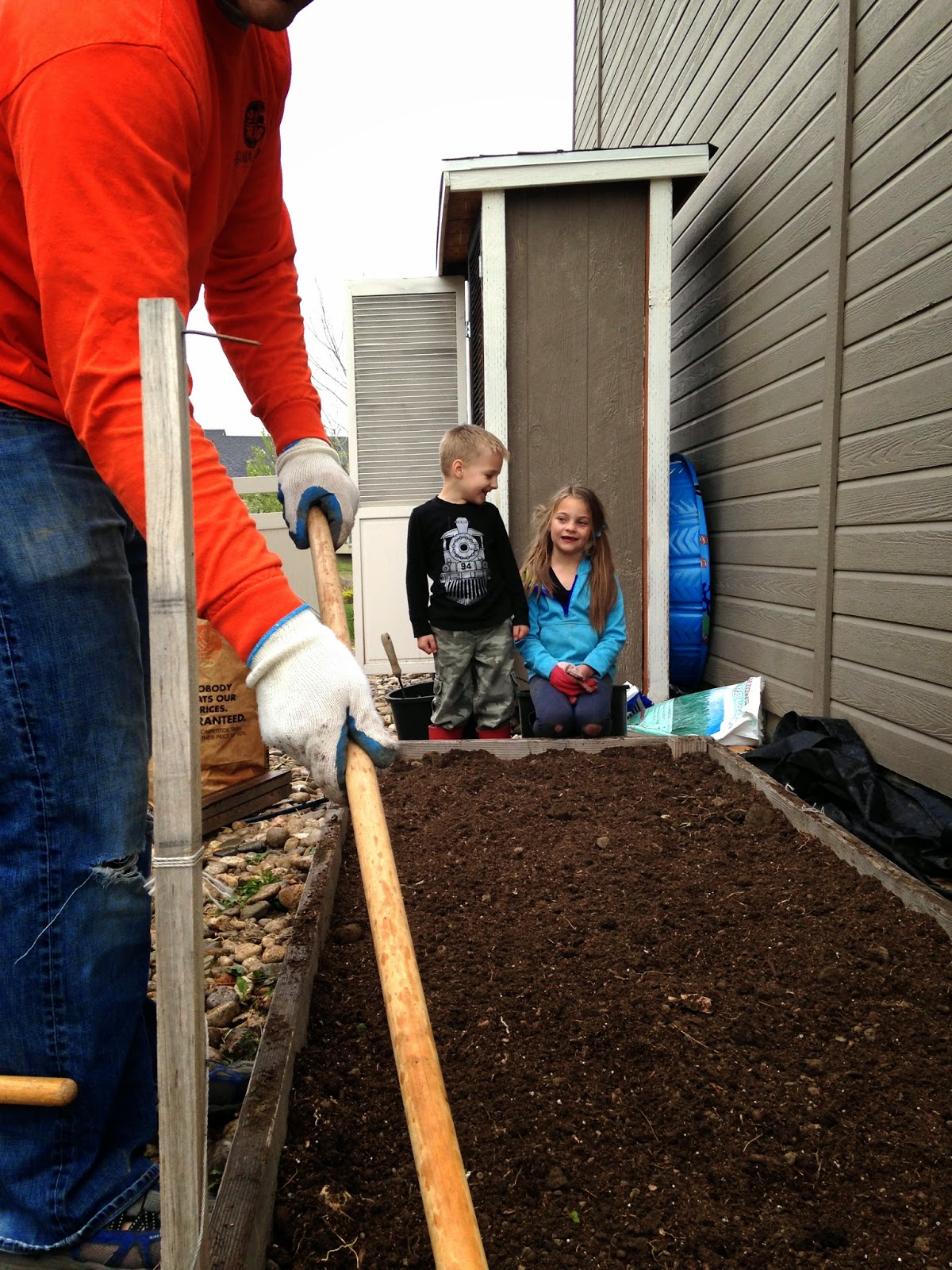 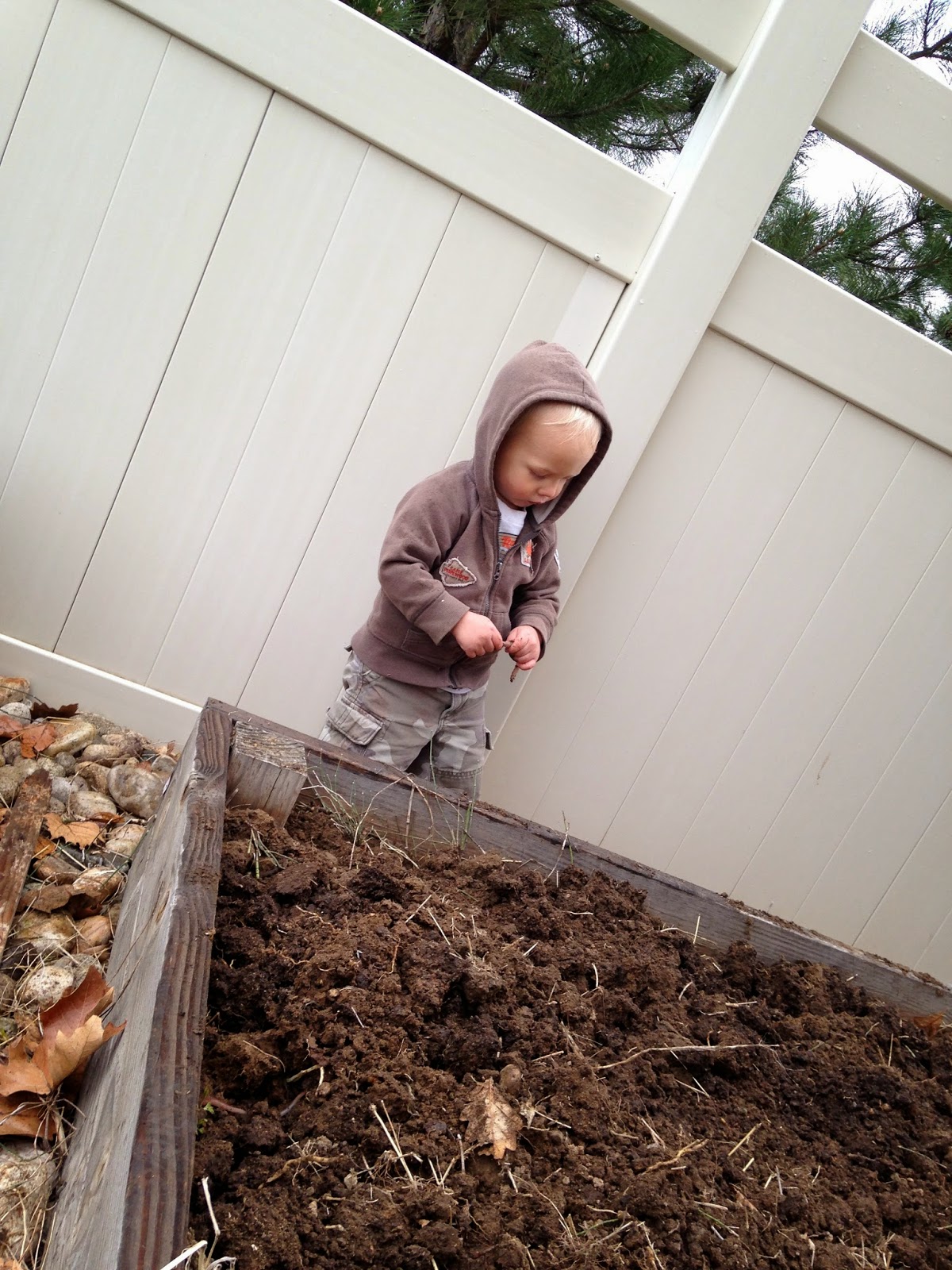 Playing with worms and bugs. 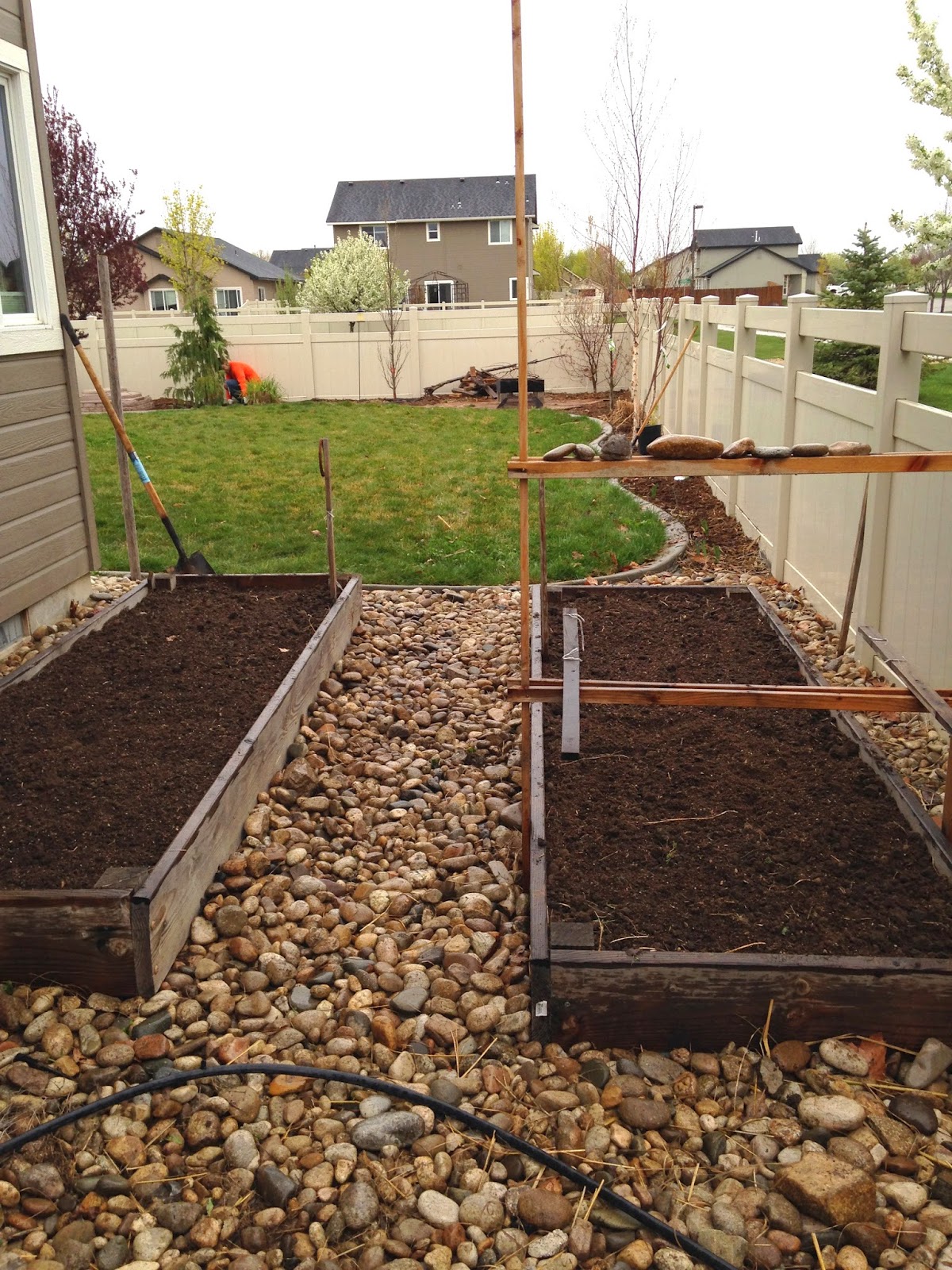 The finished product.  Peas are in, strawberries were planted later in the day, and the rest of the boxes are ready to go. 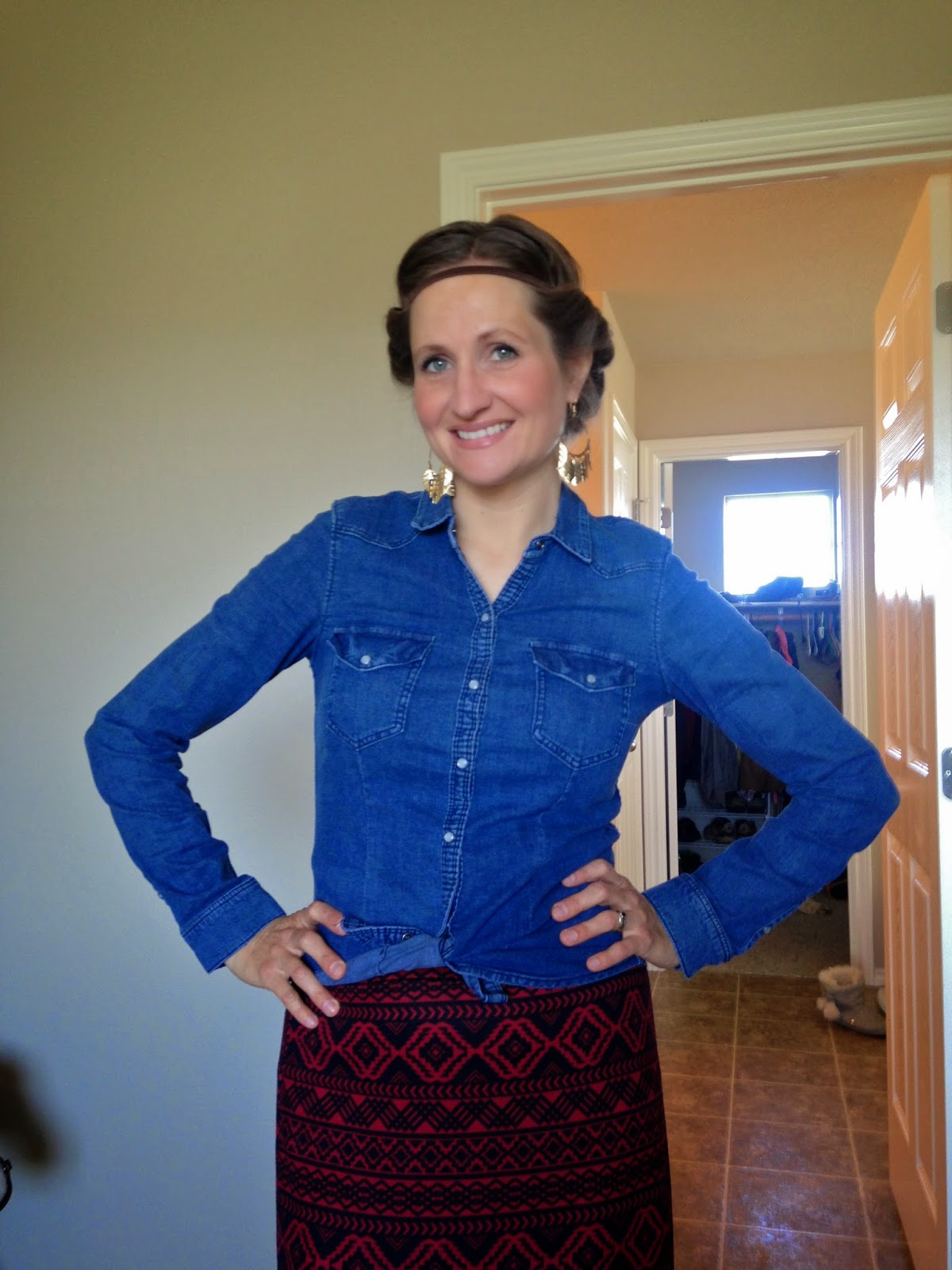 Eric and I are taking a trip this summer, and really want to pack light.  That means no blowdryer or curling iron for me, so I've been experimenting with different ways to wear my hair either up or with no heat.  I'm definitely a hair down kind of girl, so wearing my hair up like this (above) was a big step for me.  It took me about 5 tries before I got it right! 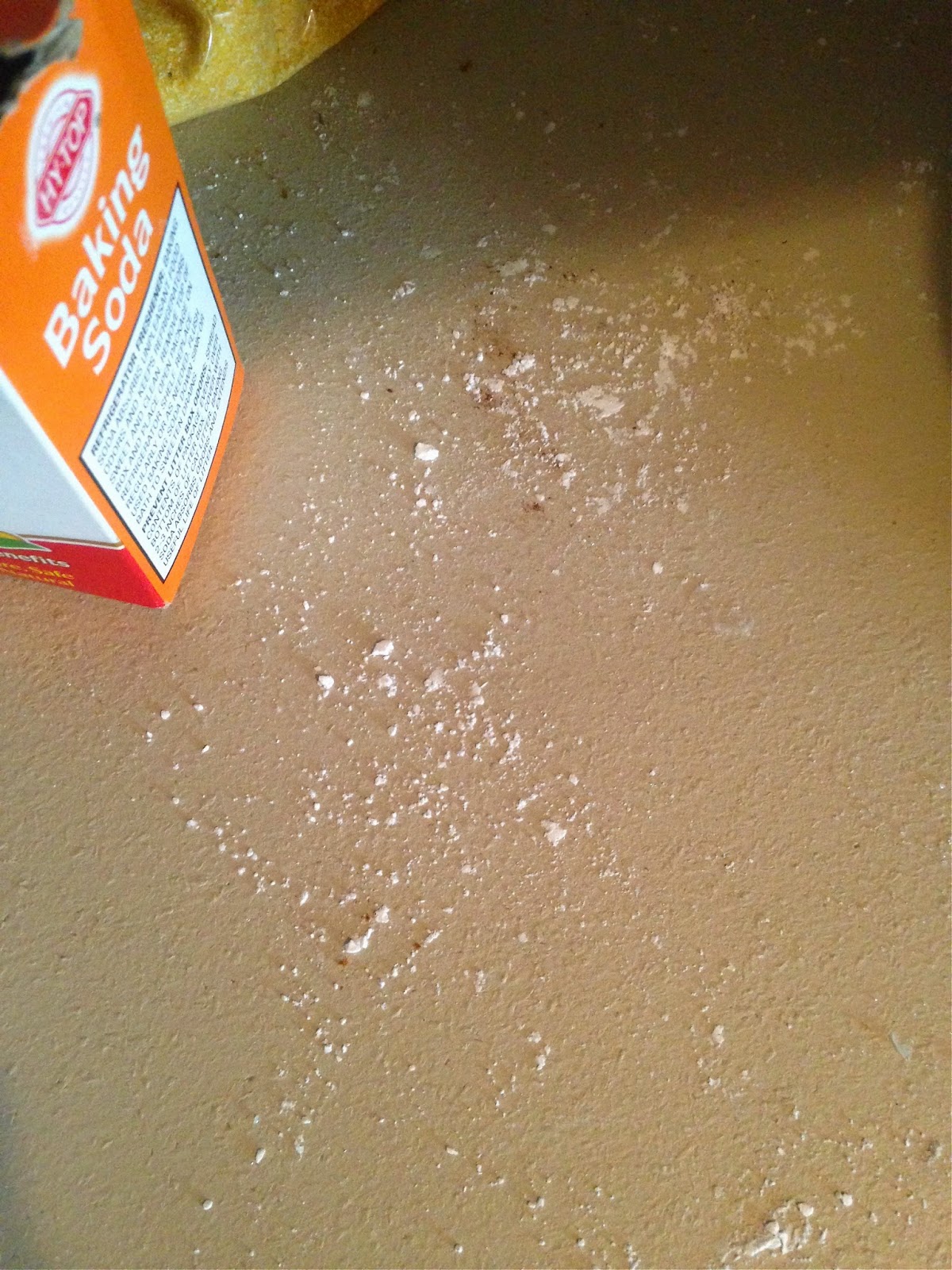 Well despite Aspen looking just like her daddy, she is definitely my child.  She likes to wear her pajamas when she's home (me), she likes to dance in the mirror (was me), and she likes to sneak sugar (so used to be me).  I've found a couple piles of sugar (powdered and granulated, no discrimination here) on one of the shelves in the pantry, and after confronting Aspen she fessed up that it was her.  I get stern about it because I don't like that she's sneaking when she knows she shouldn't, but it reminds me of what I used to do when I was her age.  My mom had two large drawers in the kitchen; one filled with flour, and the other sugar.  I would often sneak a clump of sugar from the drawer when no one was around.  So I'm stern with Aspen, but inside I'm chuckling to myself. 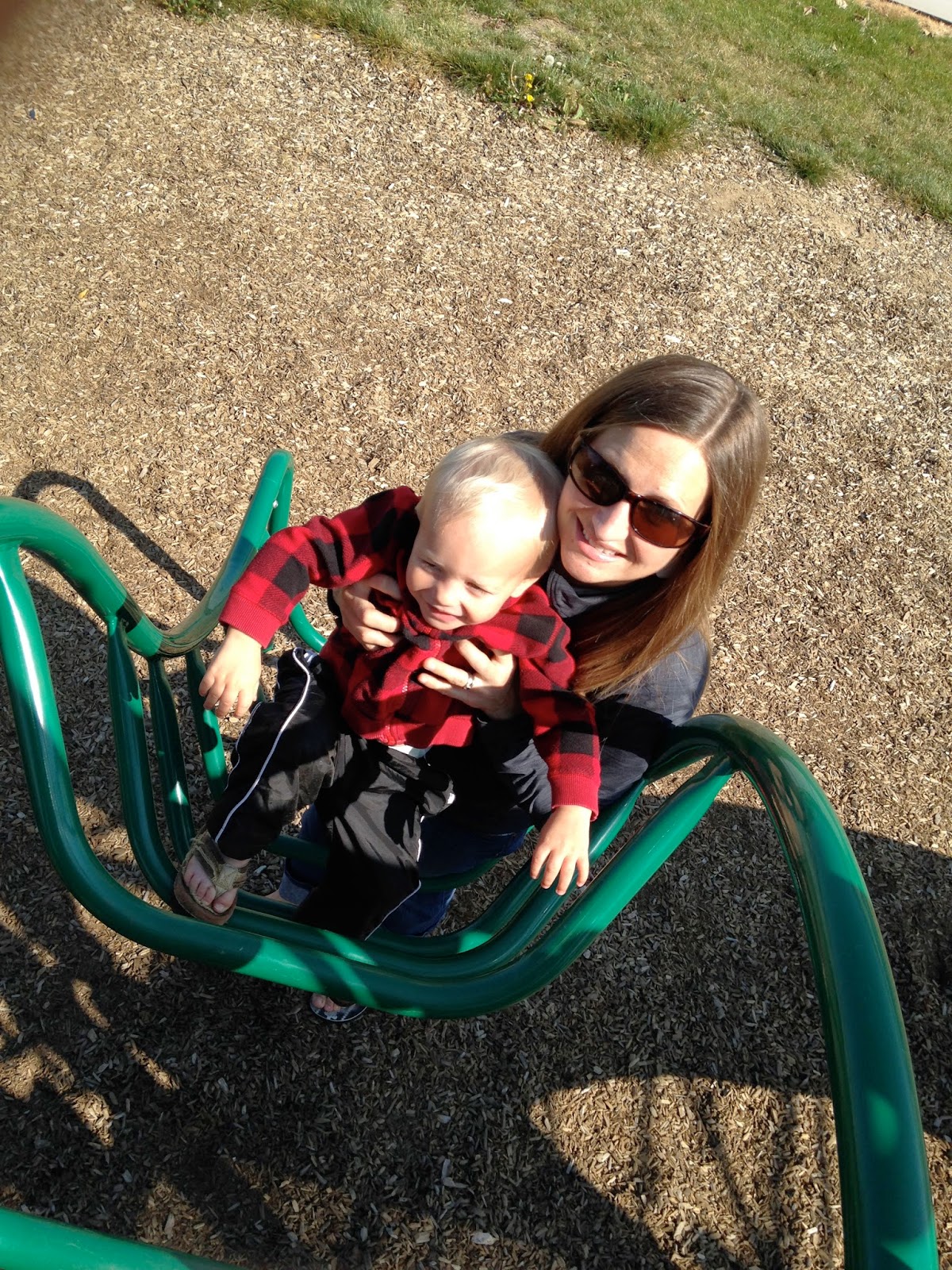 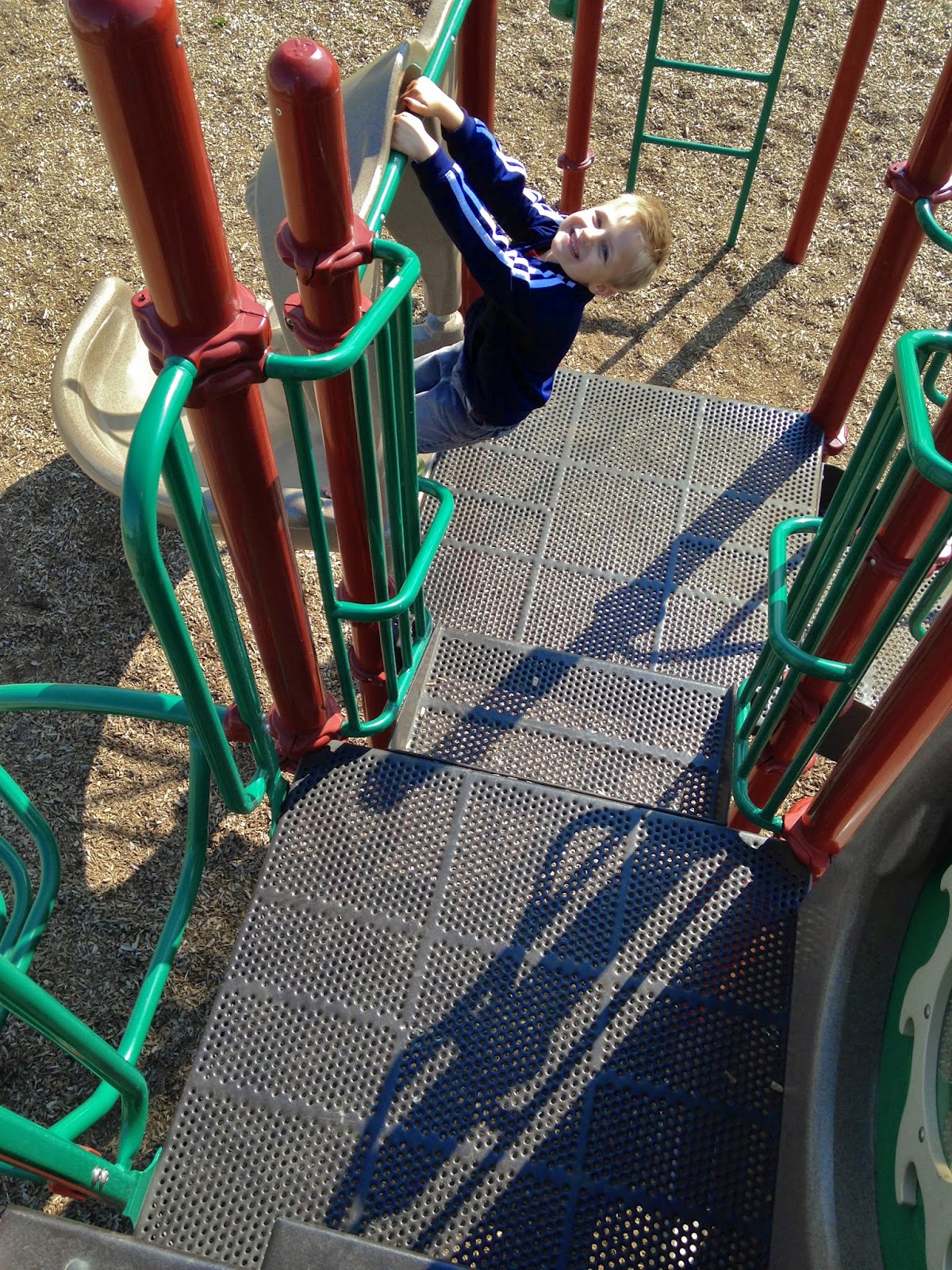 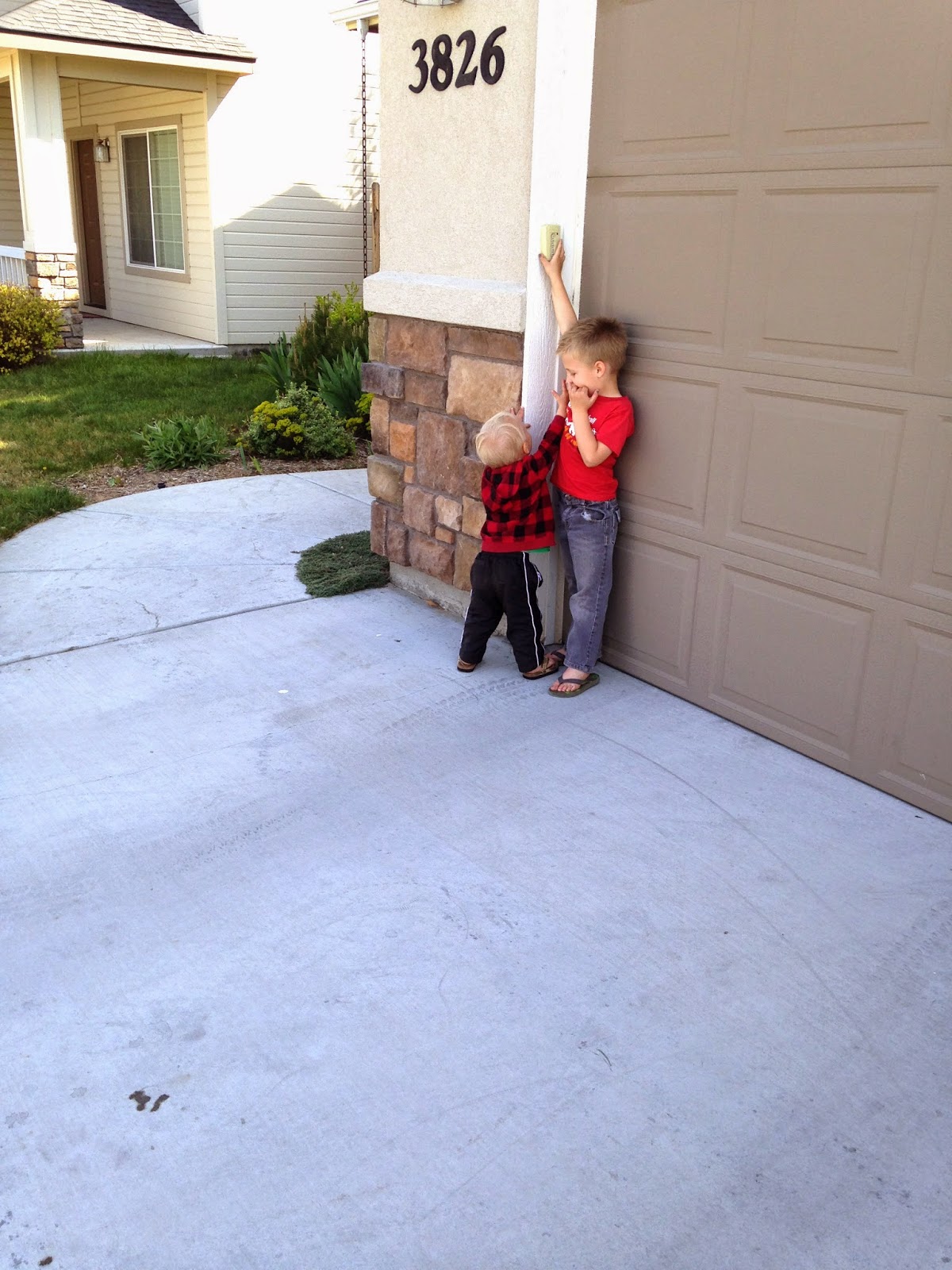 ......and then when we got home they were disputing over who was going to enter the garage code.  This is a frequent cause for contention between my kids, even Birch now who chirps, "push buttons!"  So we take turns. 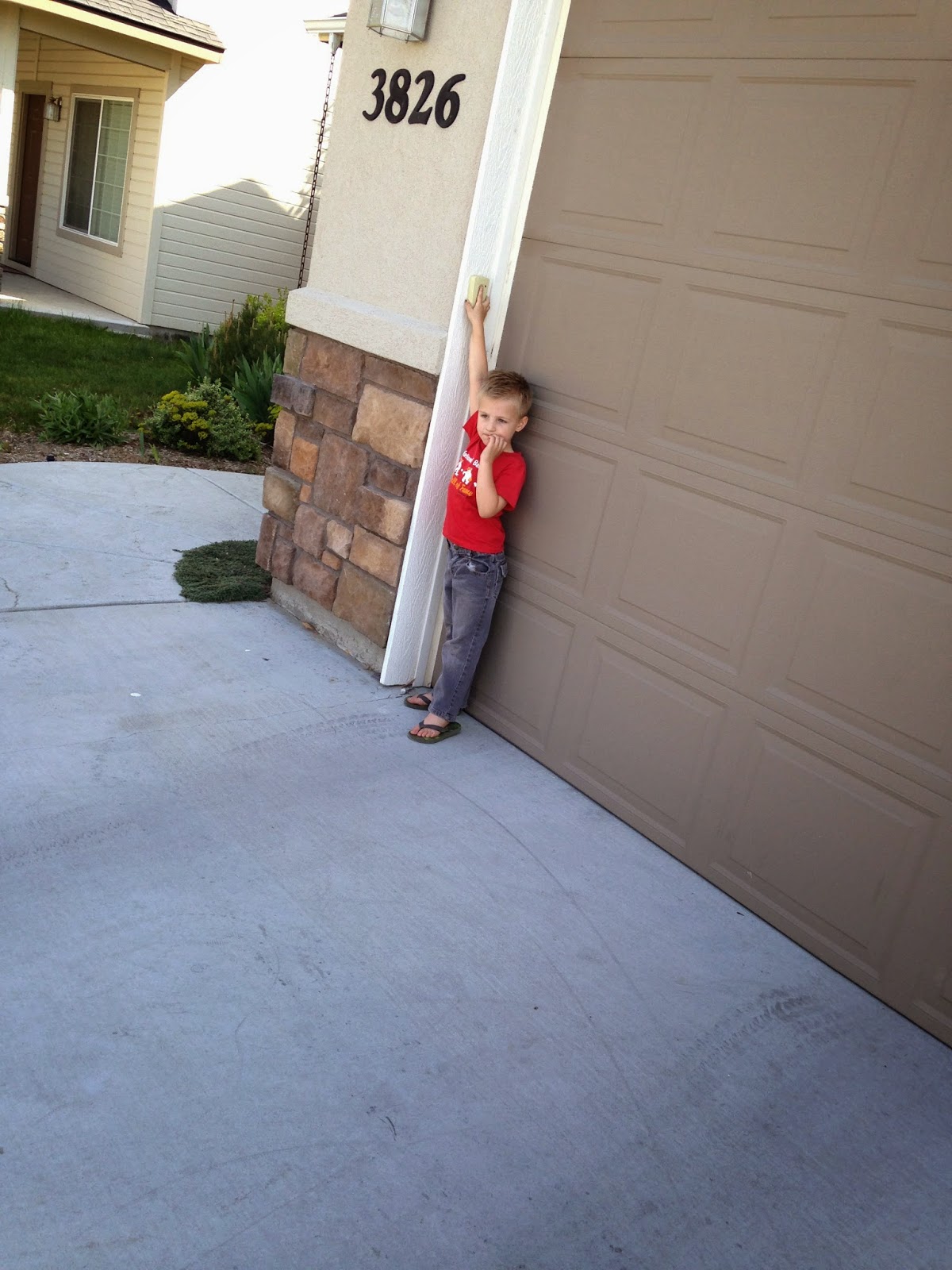 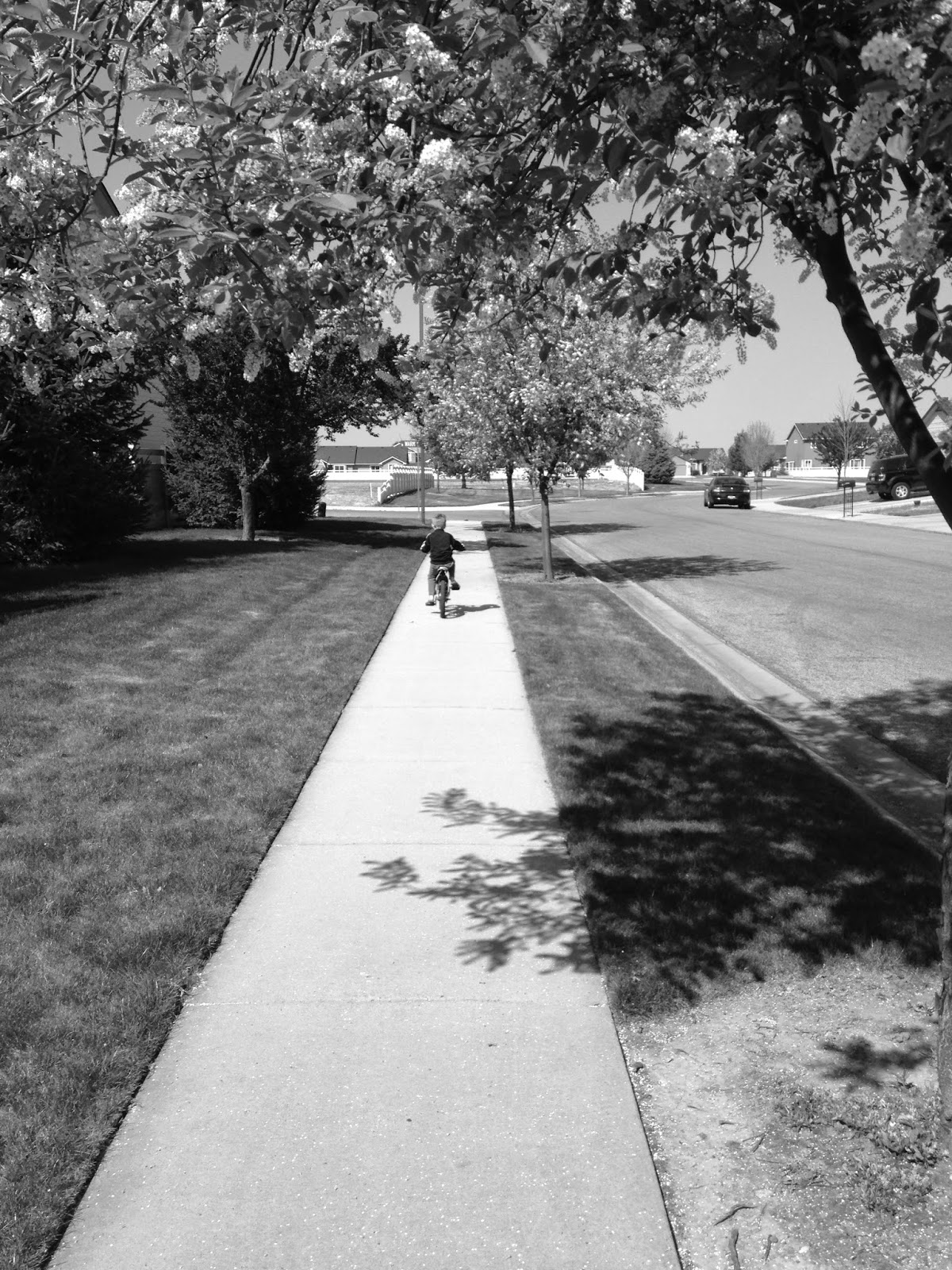 Birch has been sick with croup so we've been riding our bikes a lot lately to get out of the house and get some fresh air. The kids spotted a robin in this tree as we were coming home from church the other day. 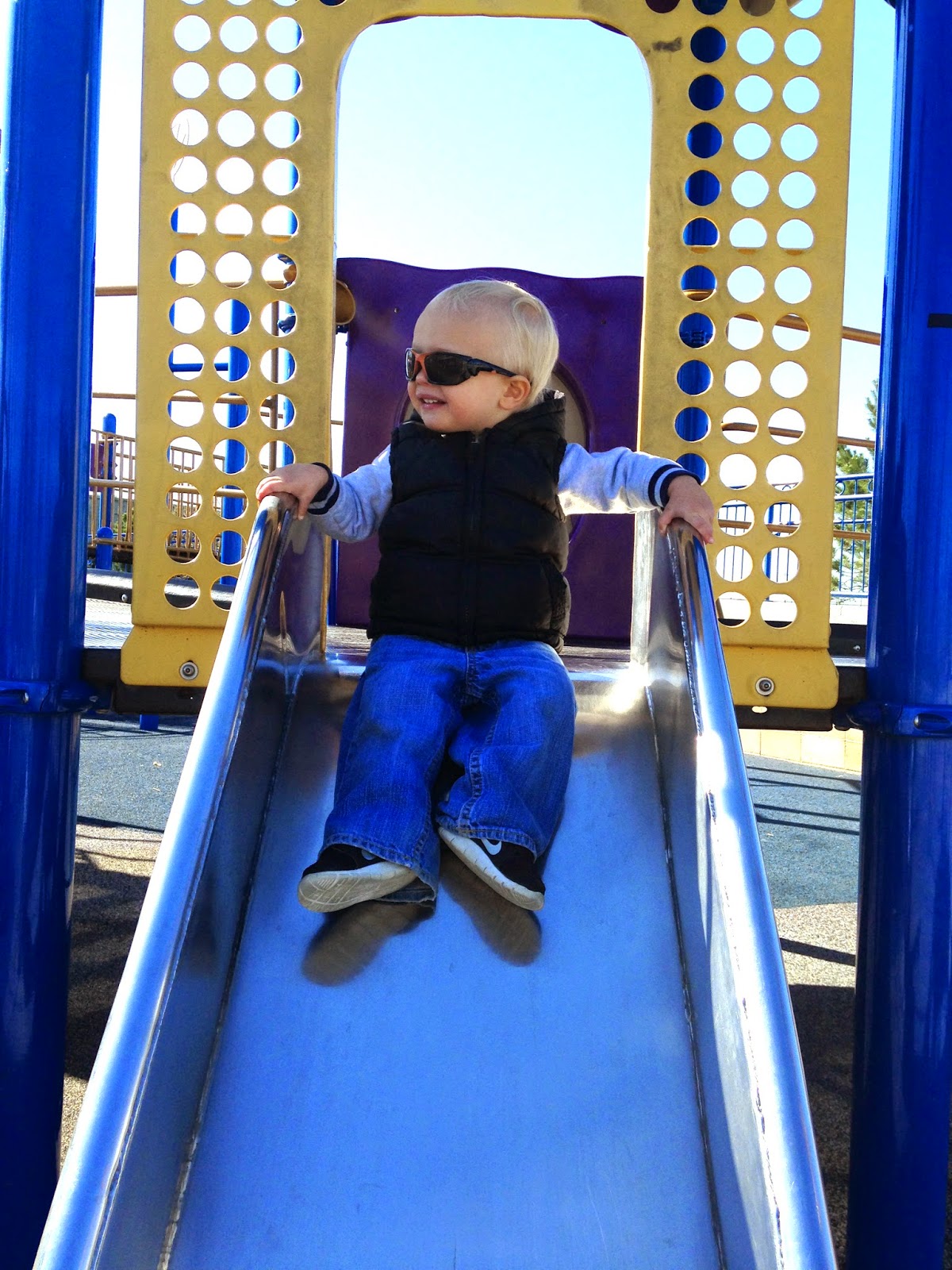 Birch is getting much more brave with going down slides lately.  Its fun to see him getting more comfortable with them. He heard a motorcycle far off somewhere before he slid down this one and said "what the....heck?". 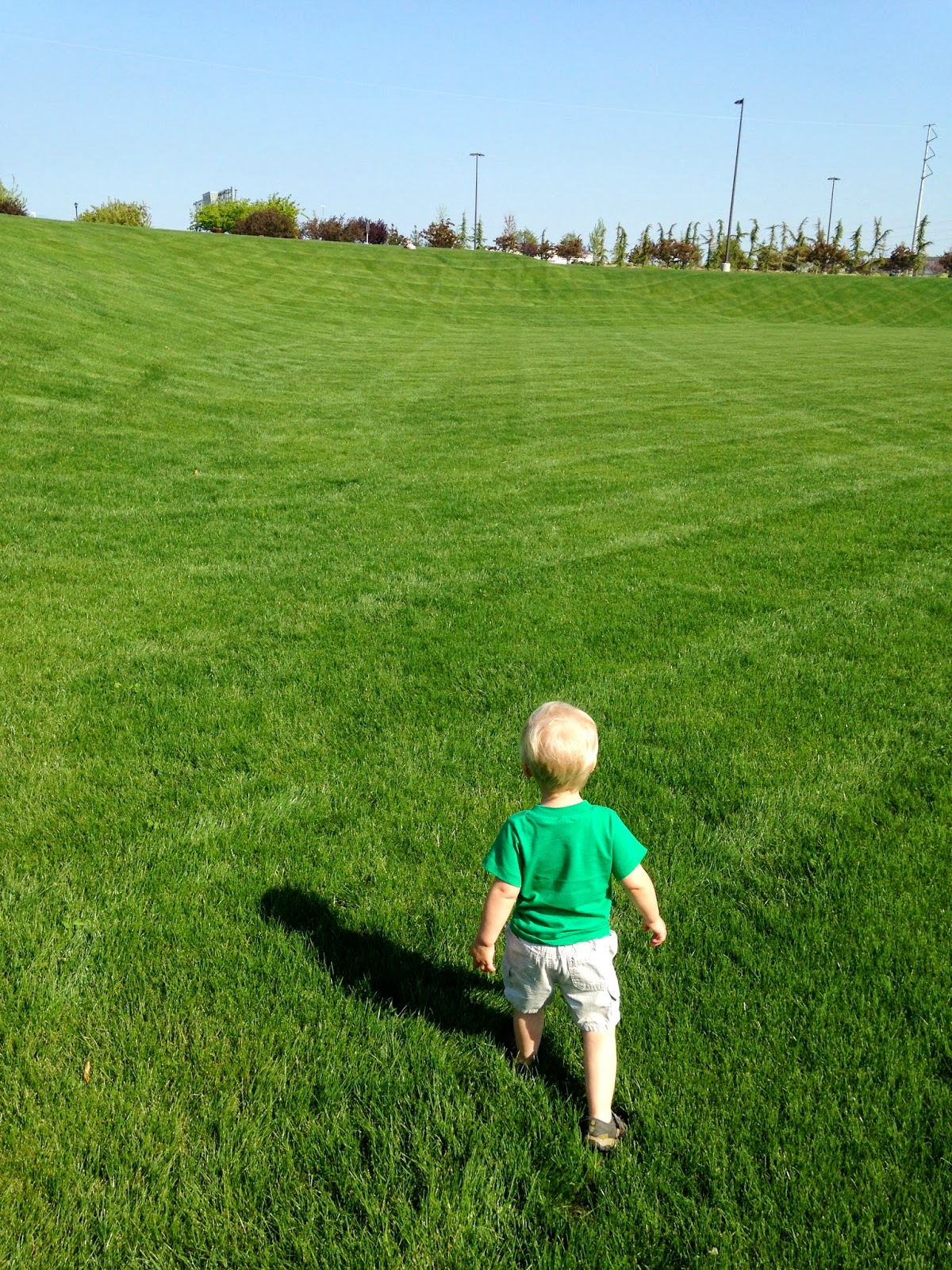 Last night we went to a fundraiser at the zoo, which was fabulous!  But we hung out at Scentsy for a little bit beforehand until Eric got off work.  There is a huge field with hills at the Commons and the kids like to roll down them.  Birch stands at the top of the hill and just looks down, scared to death but wanting to follow Aspen and Oakley, so eventually he lets me take his hand and we run down together. 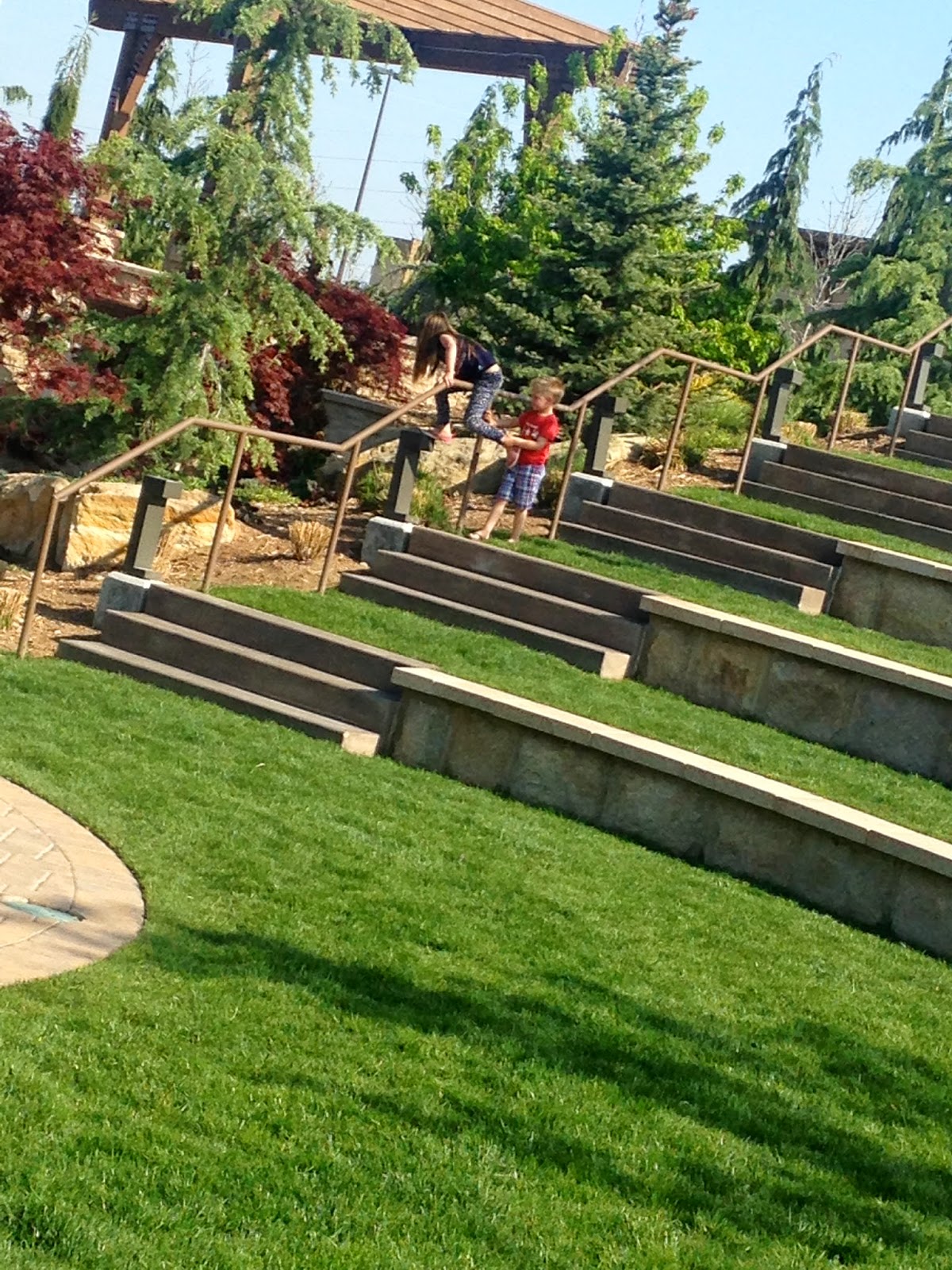 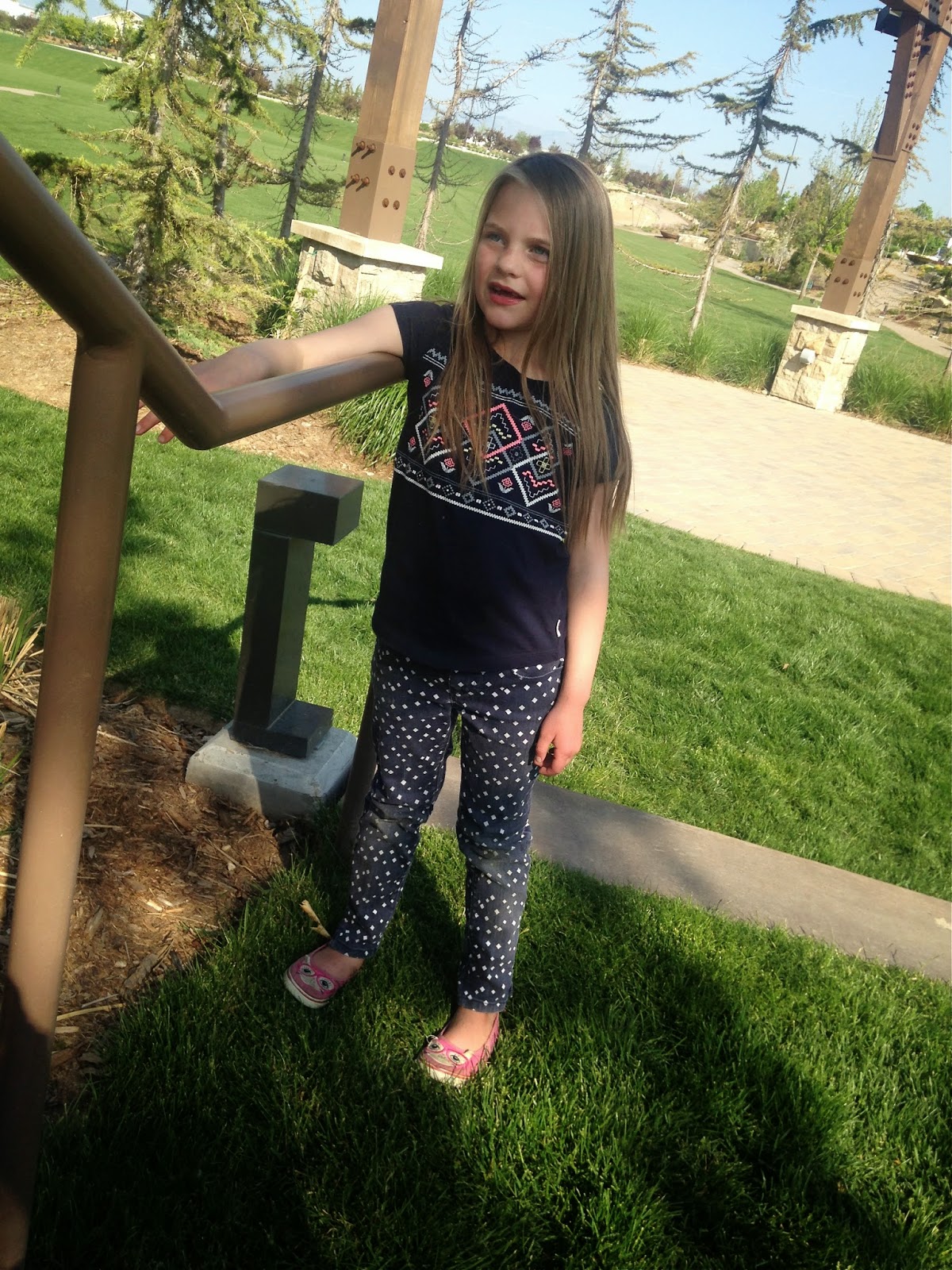 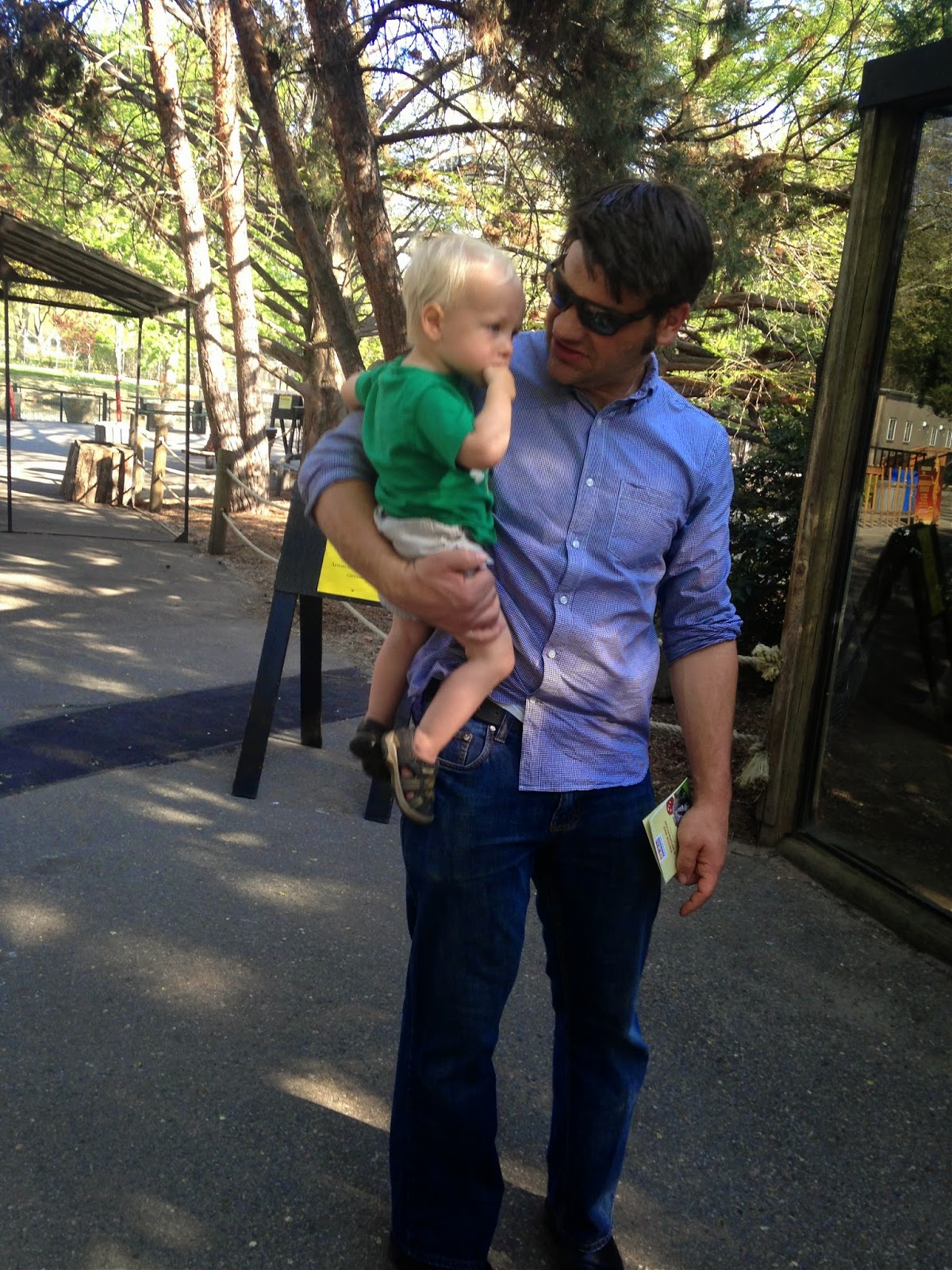 The fundraiser was so much fun.  There were about 200 people or less there and we had the zoo all to ourselves, with dinner included.  The weather was perfect; warm with plenty of shade. 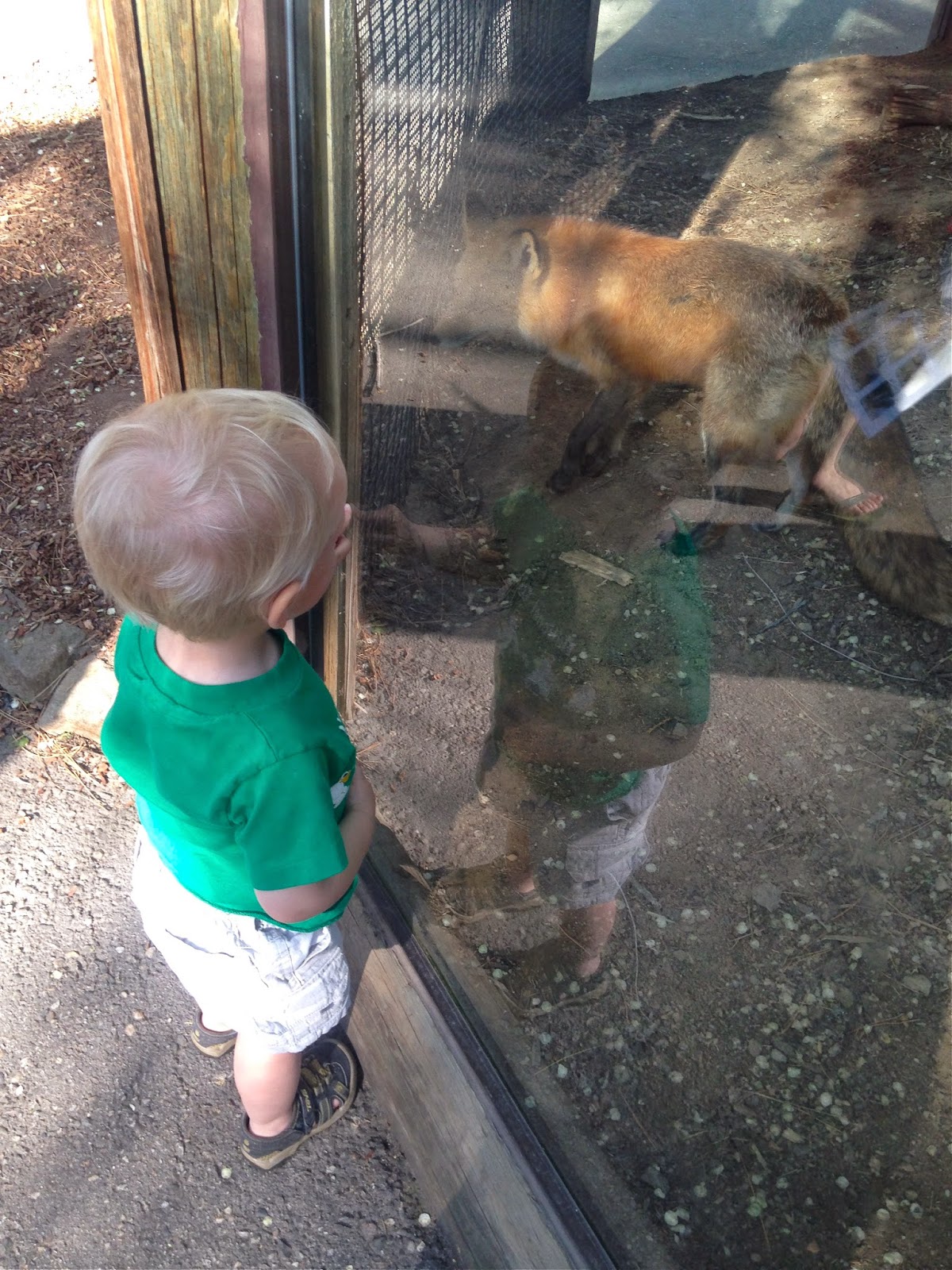 What does the fox say?  Well this one wasn't talking. 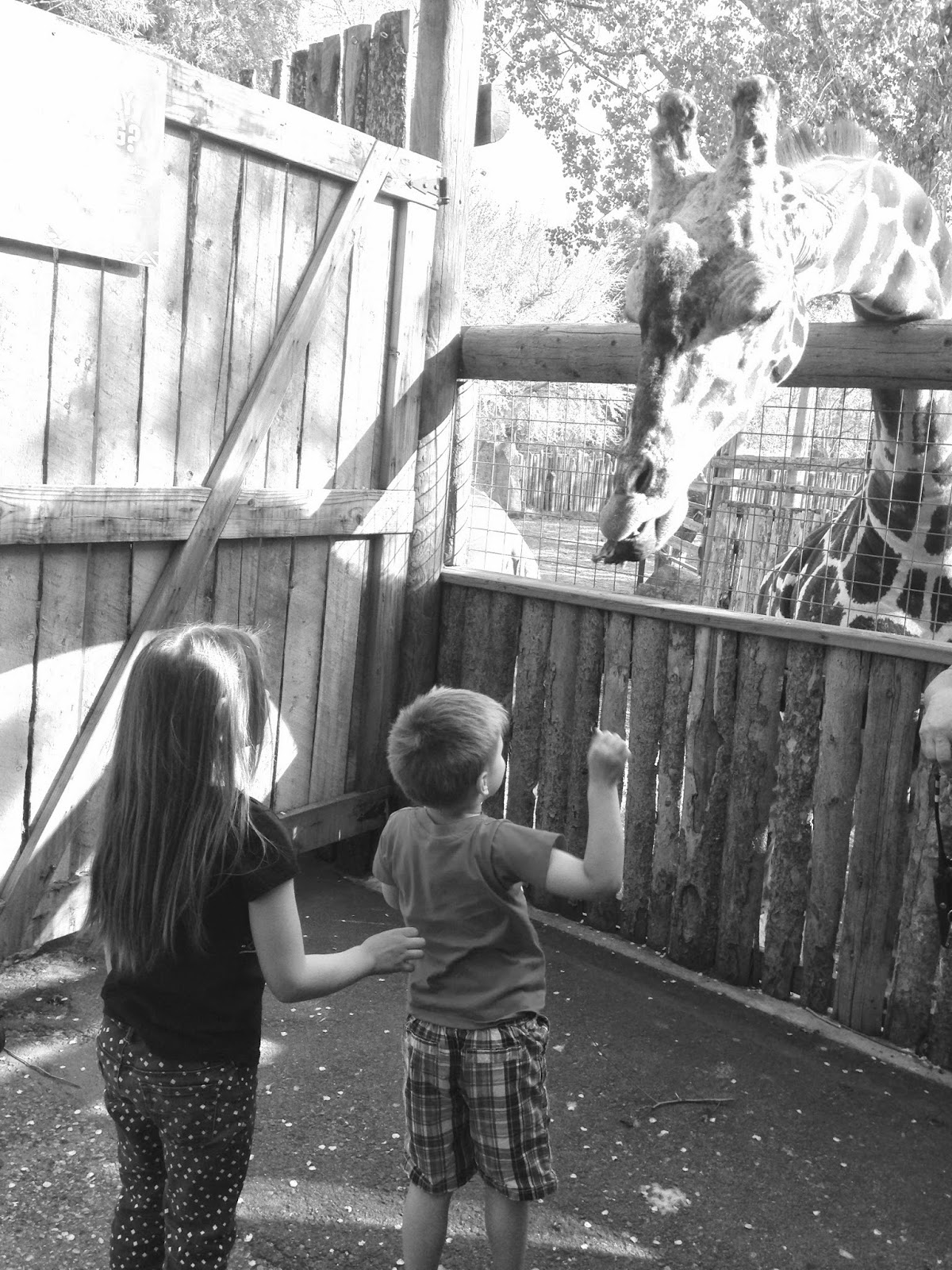 The kids each got to feed the giraffes, 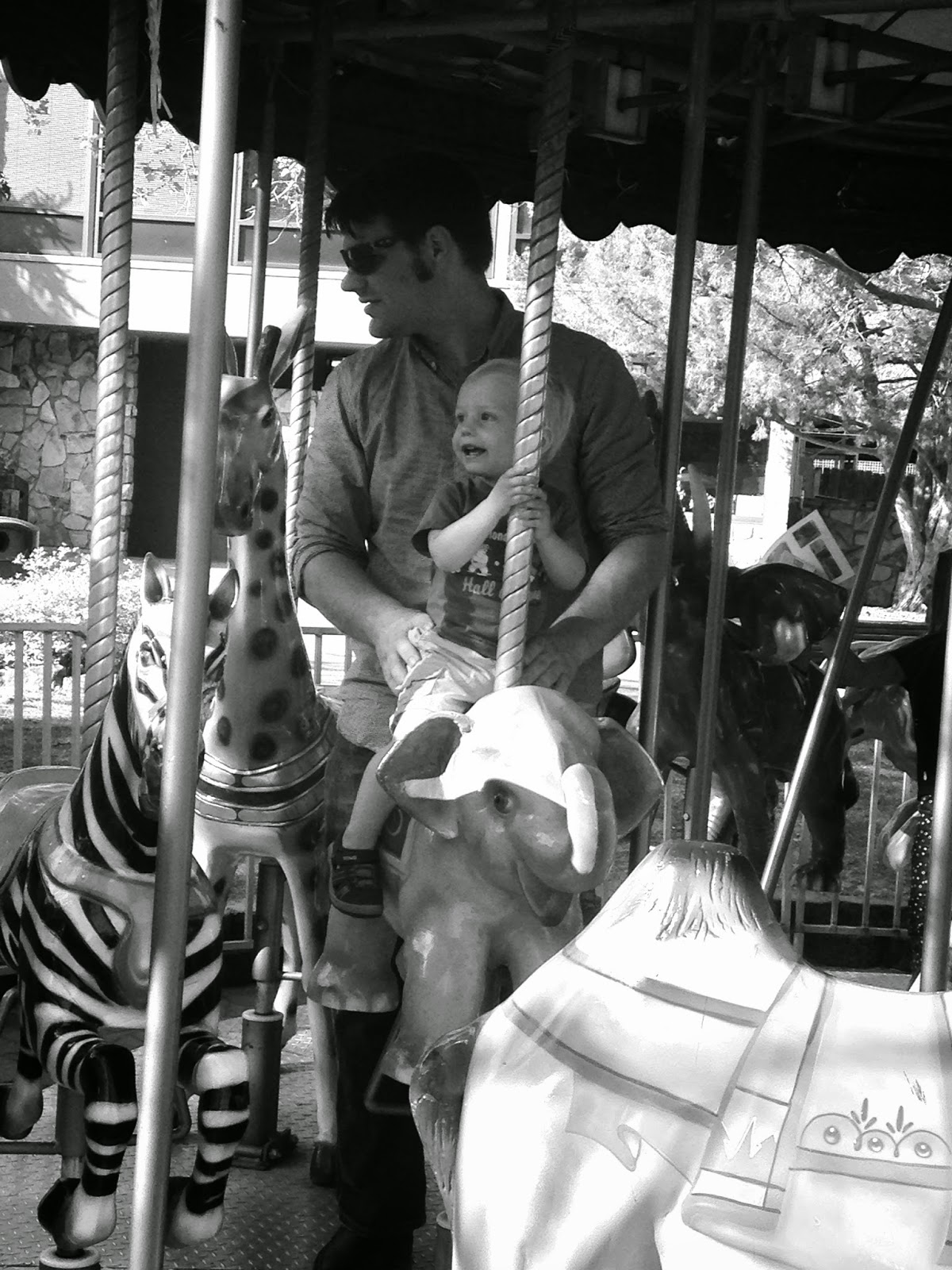 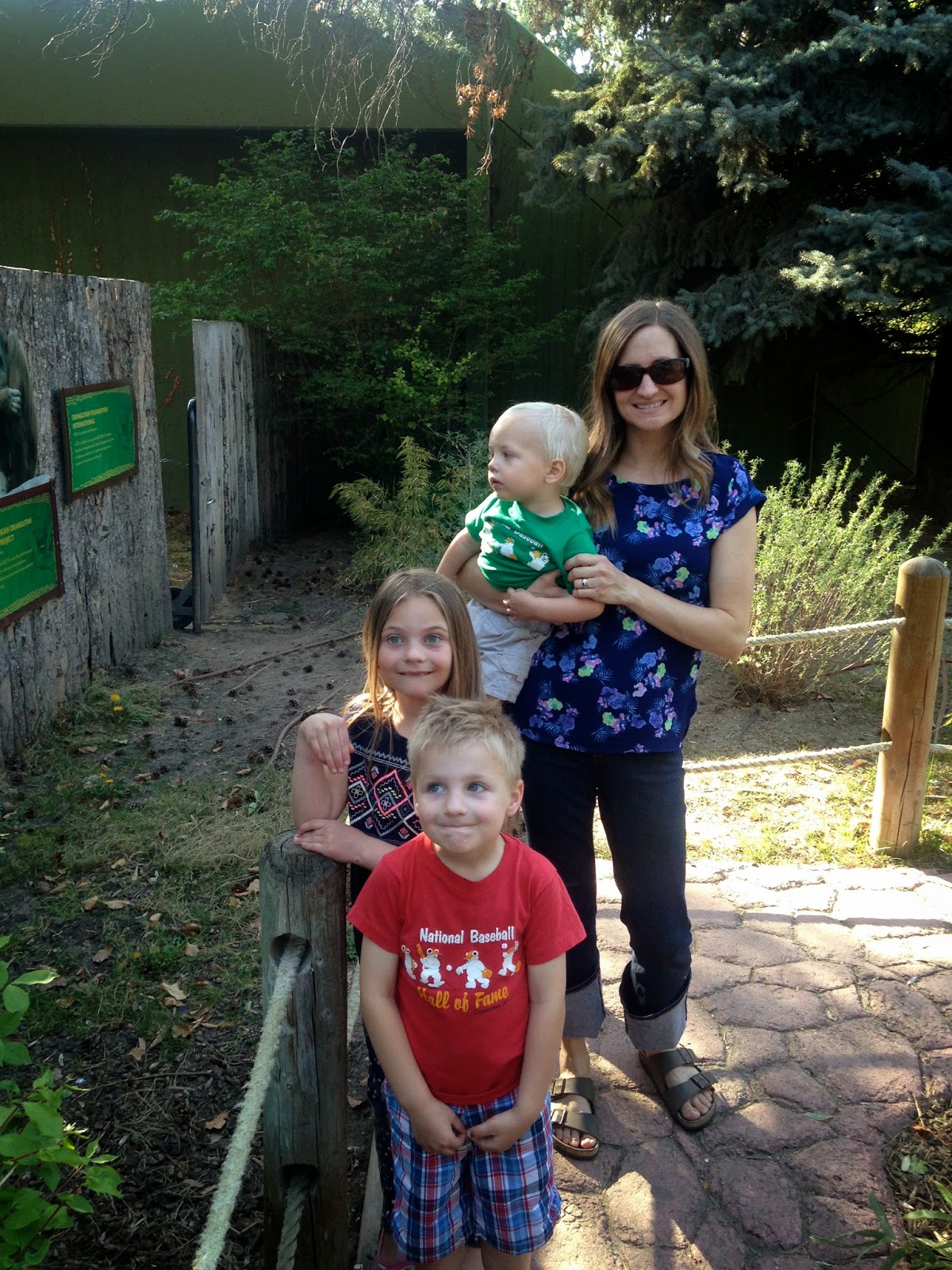 and listen to the lions roar all evening long, which we could hear from anywhere in the zoo.  It was a little terrifying; I felt bad for the lions but so glad they couldn't hurt us. 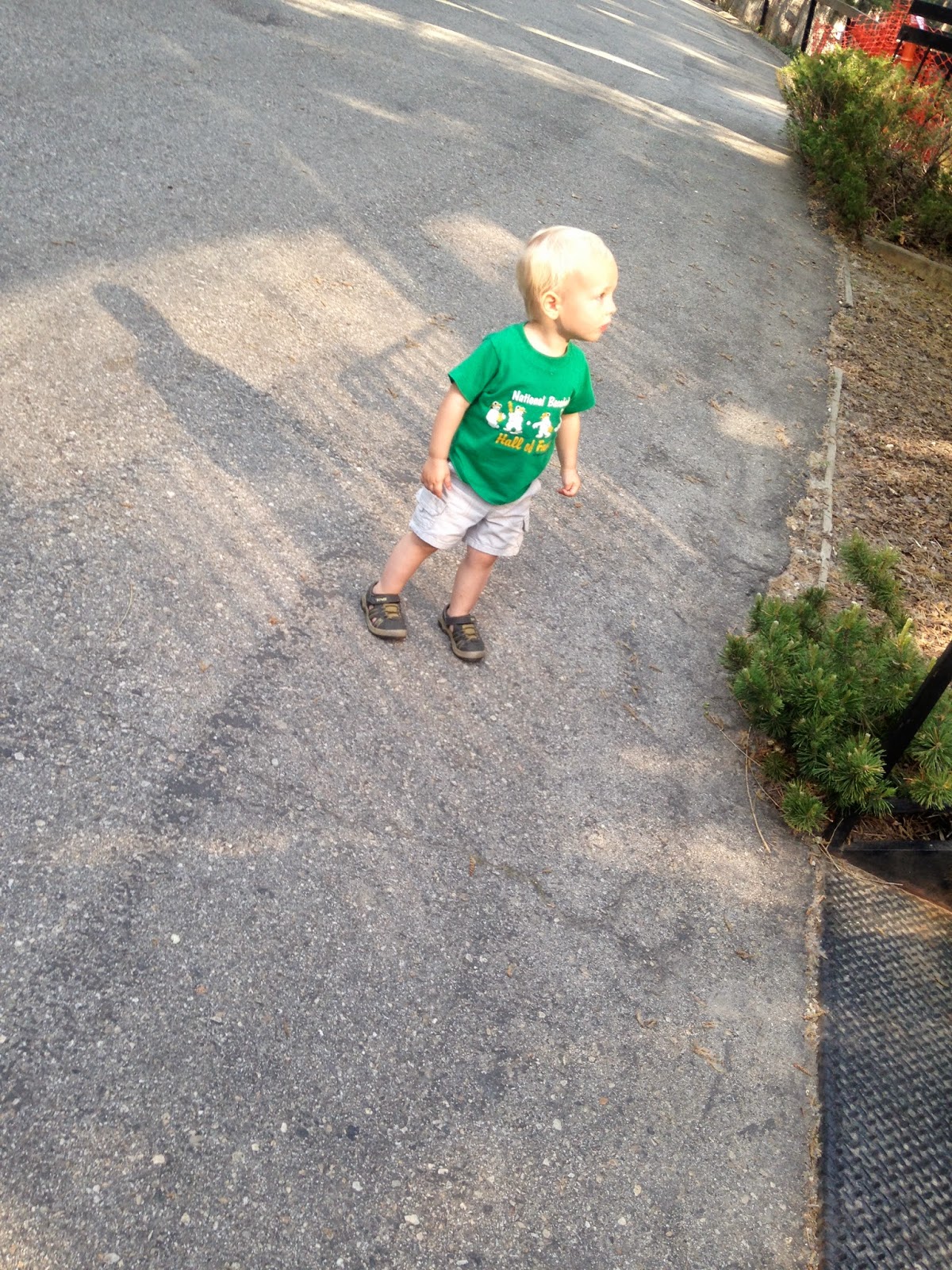 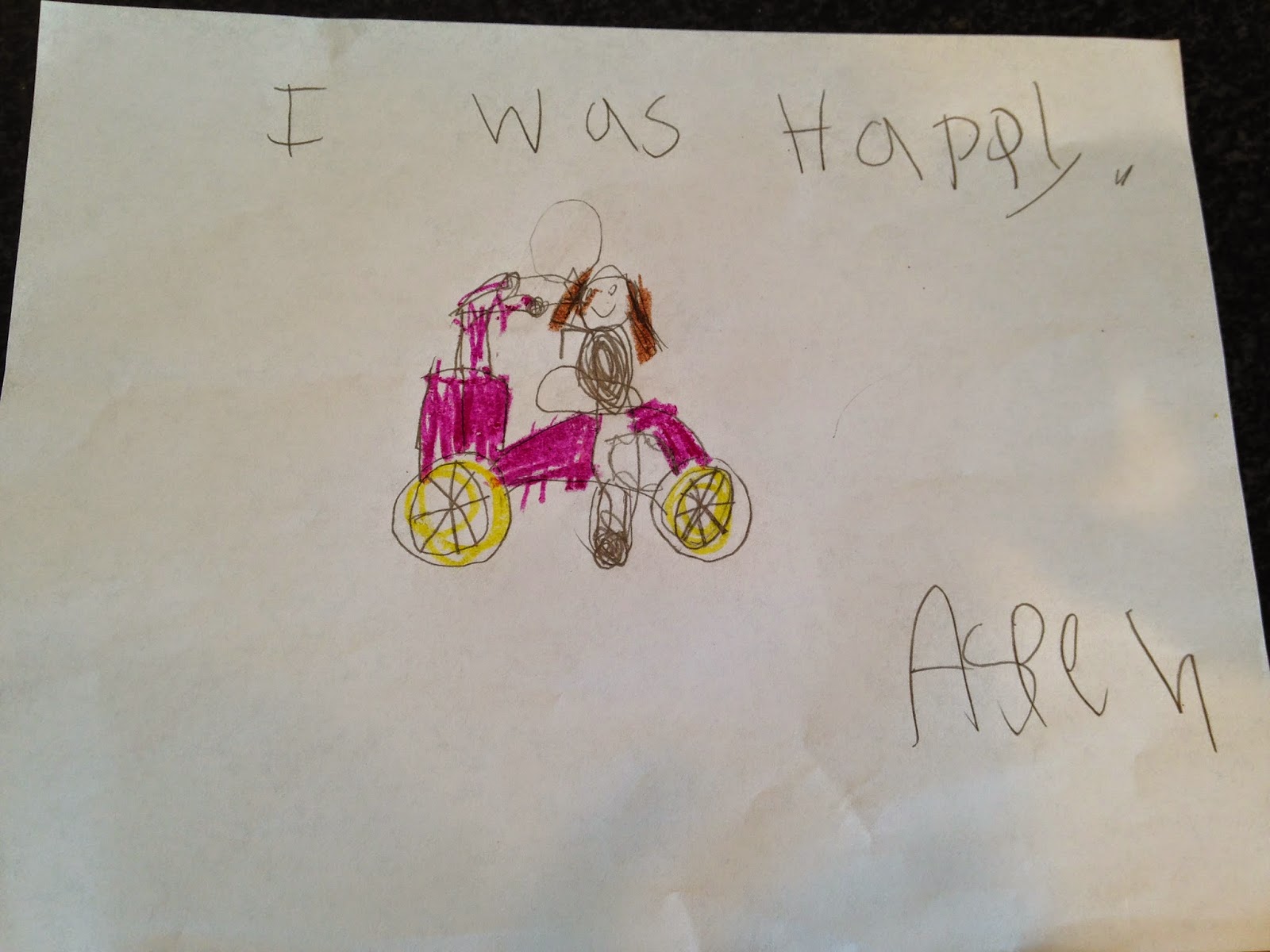 Just wanted to throw in here some of the kids' artwork.  I found this picture of Aspen on her bike on the counter this morning.  I texted it to Eric because I knew it would make him happy. And here's Oakley's pine tree, which I love. I'll have to post a picture of one of his T-Rexes next time. He's been drawing them a lot lately and they are quite cute.
Posted by Chelsi Ritter at 1:49 PM

I just loved this post, but especially your HAIR in that up-do!! Wowza, Chelsi!!

Chelsi, you look so cute in the zoo picture! And soooo skinny!

Is Aspen eating chalk yet?