I have a couple things on my must-get-done list this week, including potty training Birch and teaching Aspen and Oakley to tie shoes (they've only owned velcro/slip-on ones until recently).  On Sunday it hit me that Birch is starting preschool in 3 weeks and still hasn't figured out how to use a toilet, though we've attempted and gotten close before.  This, however, was not on the agenda: 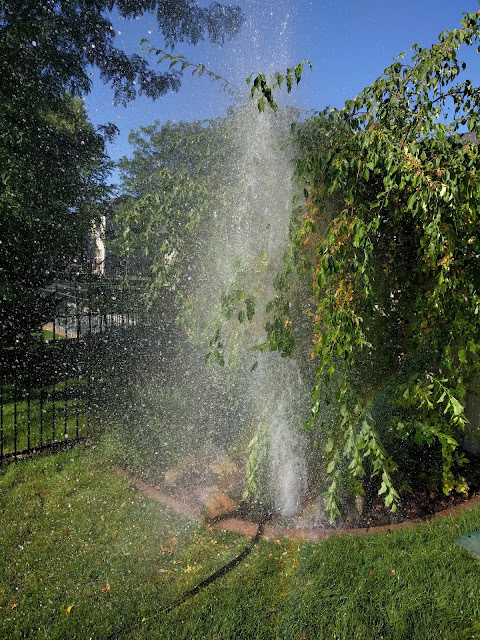 This morning I was outside in the backyard spraying cobwebs.  When I crossed to the other side of the yard I thought the hose was kinked so I gently yanked it.  To my shock I saw the hose jerk away from the irrigation water box and a geyser shoot into the air.  After a second or two of just standing there like a statue I called Eric for help.  I found out later that the (cheap) pipe leading from the water pipe to the hose had snapped in half.  Eric told me there was a black valve in the box I needed to turn off.  After yelling to the kids to come see what was going on in the backyard I threw on my rain jacket and ran over to the source of Old Faithful and tried to look for a black valve, but without any luck.  I could see a red one, but after fishing my hand around and feeling no other valve I gave up. Our neighbors Liz and Steve saw what was going on and came over to help.  After 15 or 20 minutes of Steve debating the best course of action I asked him to explain to me how the irrigation valves worked as Liz was grabbing him a tool at their house.  He started talking about hoses and pipes and then stopped.  "Well, actually....hmm...." he muttered, then after a moment grabbed the red valve in the box and turned it, shutting off the water and therefore the geyser I had created.  I stared in disbelief.  "Well I could have done that," I joked.  When Eric called me later I informed him the valve was actually red, not black! 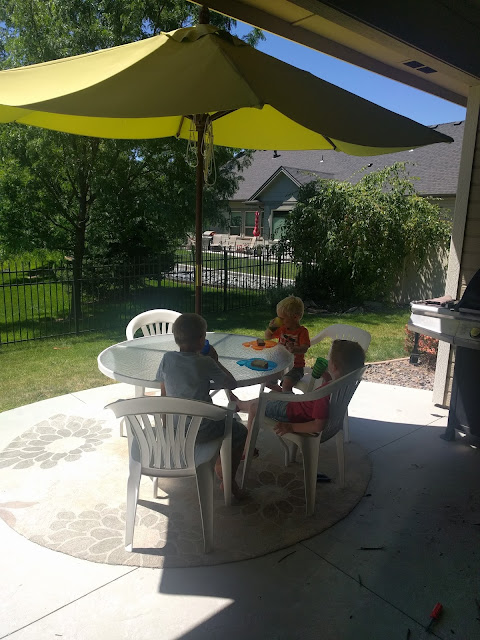 The boys in the backyard with their friend Van.  Van lives in an older area of Boise, with lots of trees.  "I love your house Van," I heard Oakley say during their lunch.  "It looks like its in a dino forest." 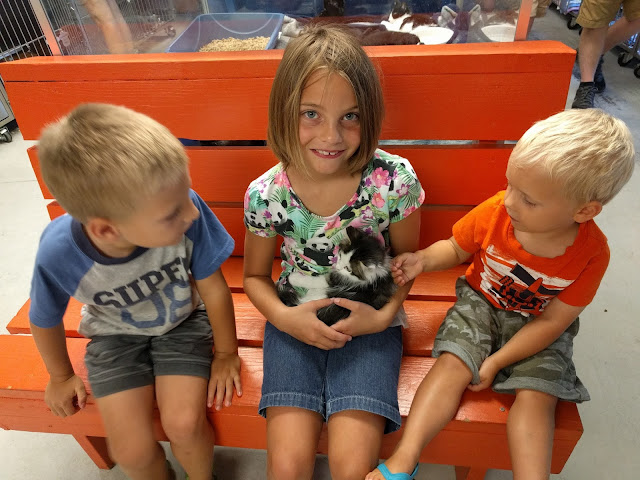 Aspen has been begging me to take her to the animal shelter for a few weeks, so last week we found a day to go and checked out the one in Meridian.  It was pretty tiny, with only dogs and they can only be walked by permanent volunteers, so we went back to the car to head home.  Poor little Aspen was so disappointed.  She had gone to the Boise shelter with her Grammie a few weeks before, and loved it so much.  She got to walk a dog there all by herself and has decided to volunteer there as soon as she can, when she turns 12.  It was hot and Birch was cranky and hungry, plus lets face it: I'm not really into (being around or near) domestic pets.  But her little face....I couldn't say no.  So we drove the 25 minutes to the Boise shelter and thank goodness it was worth the trip.  We pretty much stayed with the cats the whole time, and it was fun watching Aspen grab kitties out of their cages, hold them, then hand them off to her brothers.  I am learning what a compassionate little girl she is, and not just with animals (though I think that's one of the reasons she likes them so much).  The other night she was telling me about some kids in her class that got teased for trivial things, and how she tried to help them feel better.  It really upsets her that some kids in school are unkind to others.  Anyway after seeing her at the shelter I will be taking her back for sure.  It was definitely her niche.

Posted by Chelsi Ritter at 5:05 PM

That's so funny about tying shoes because our kids have only had slip on and velcro shoes thus far too! Selah finally learned about 3 months ago, but now that it's summer she's rarely in shoes with laces. ;) I have a feeling we'll have to learn again come fall.
I love that Aspen is so compassionate, to animals and classmates. She has a precious heart. Our girls would have sooo much fun together. I wish we lived closer. xo