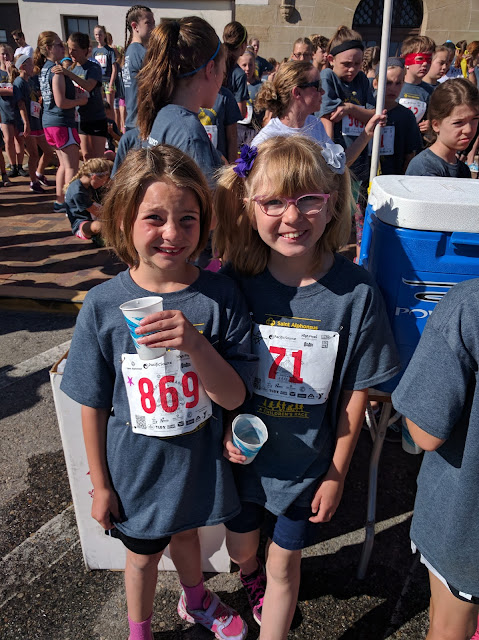 I was looking through my photos the other day and realized there are several things I've forgotten to post about the last few months.  One of them being Birch's birthday!  Woops.  The day after Aspen's last day of 2nd grade she ran in the Boise Capitol Classic, a one mile race in downtown Boise.  I was so excited, and anxious because I really wanted her to have a great experience.  Unfortunately I didn't help her train as much as I should have, so that was on me.  She saw her friend Clarissa there, which was great because the wait between drop off and start time was pretty long.  And it was hot, and the kids were exposed to the sun the entire time.  By the time the race started, Aspen was ready to go home! 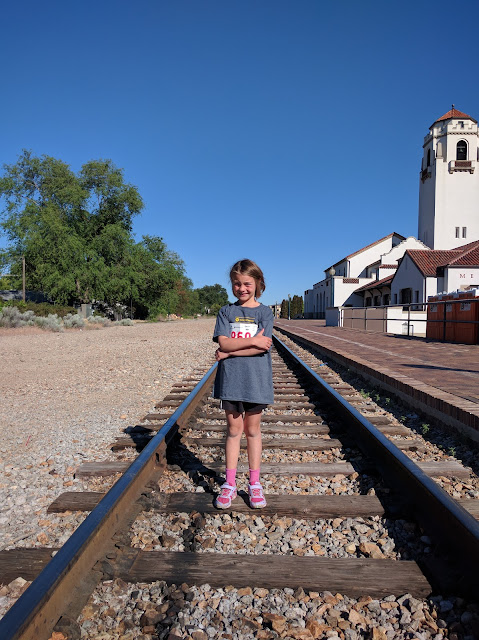 Before the race, killing time :) 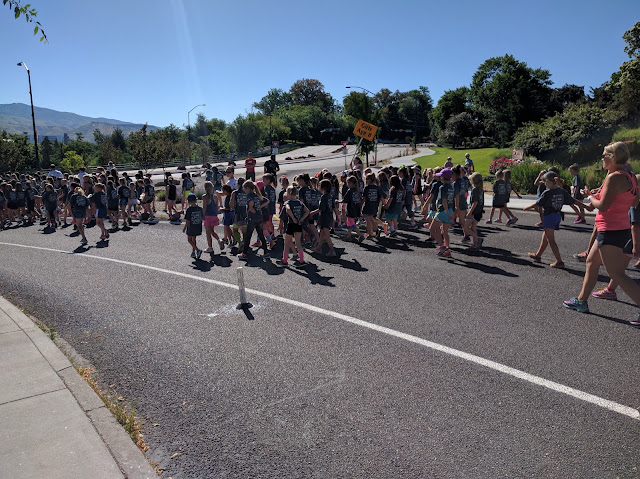 Walking to the starting line 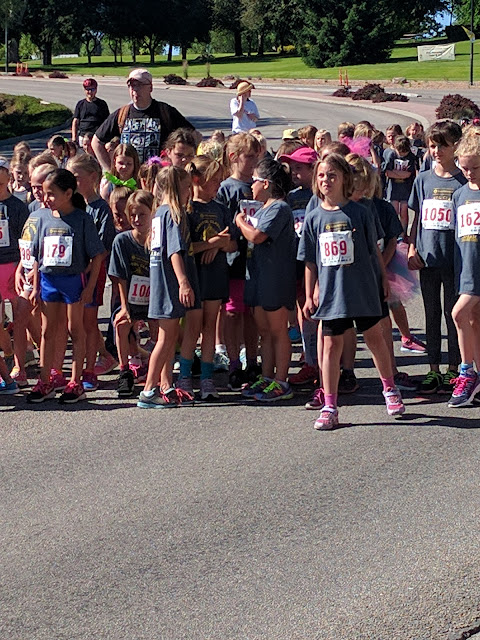 Poor Aspen was so tired of waiting.  The boys ran first this year, so that pushed back the start time even further.  I love this picture of Aspen "stretching". 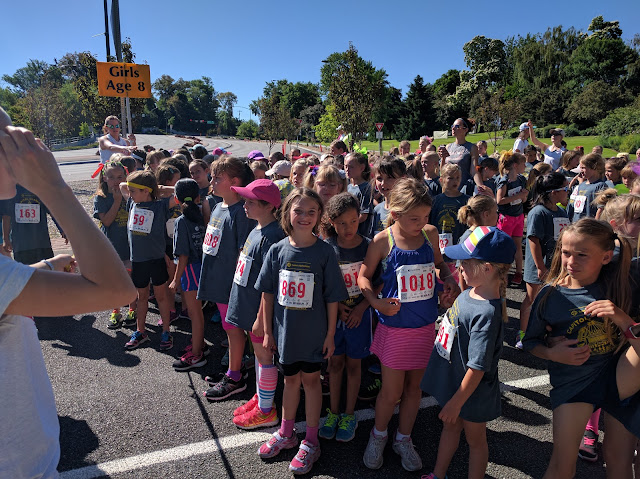 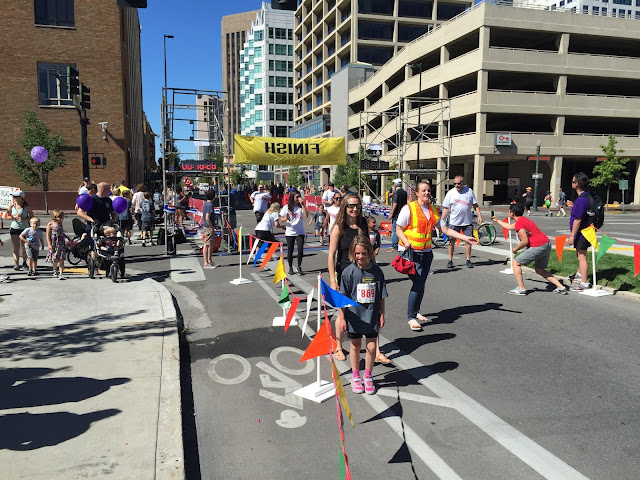 Finally it was time to run.  I wasn't really supposed to be running with her, so I tried to stay on the sidelines and jog along.  About 20 seconds after the race started, however, Aspen's little legs stopped and she started to walk. (!)  I had to assist.  The next mile consisted of me encouraging Aspen to do little jogs to upcoming signs, and then walk in between.  Afterwards I asked her how she liked the race.  ".....I think next year Oakley should do it...." was all she said :(  Next time I'll prepare her better, and maybe do a fall/spring race when the weather is cooler! 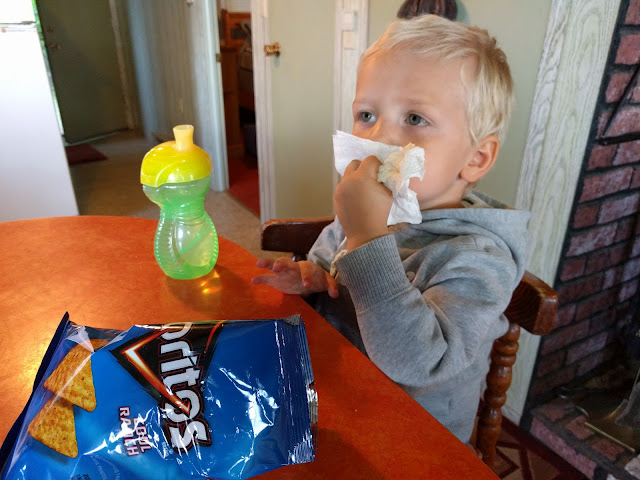 B snacking in Cascade; love how he's using his napkin. 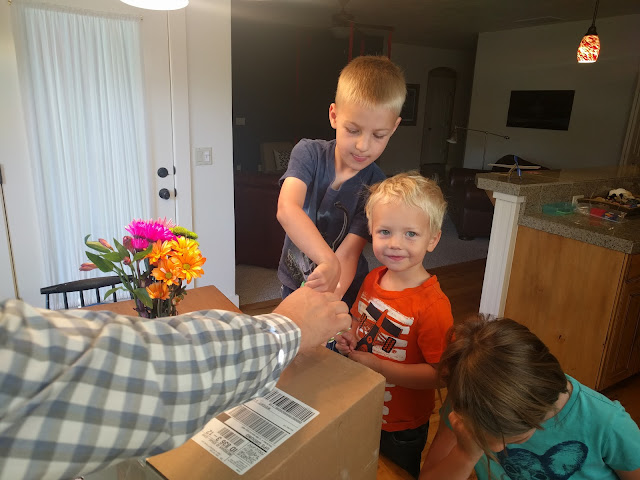 B turned 3 on May 26th.  We celebrated at home and then had a family party on Memorial Day weekend up in Cascade. 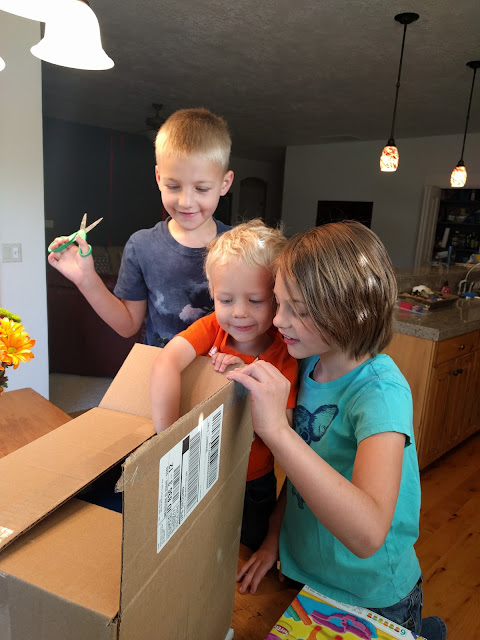 He got a sleeping bag from Eric and me, some playdough sets from Dad and Lisa, and dinos from Pete and Ami.  He was so excited about his birthday so that made it really fun. 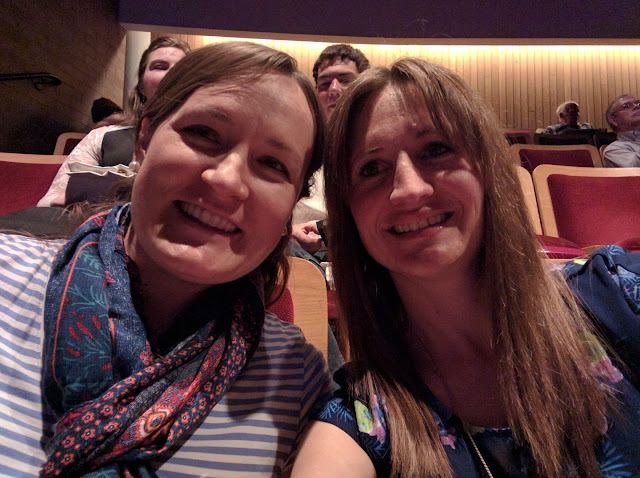 I got a call from my friend Brandi in May.  I was planning on coming over the next day to help her prepare for moving, but she asked me if I could join her to see a Celtic Woman concert instead.  Years ago before Brandi and I became close friends I went to a Celtic Woman concert with Sasha.  Brandi and her husband Mike happened to be there, and it was fun seeing someone I knew there that loved CW.  So it was fun to get to go to a concert together!  It was a really fun night.  Brandi and I lived down the street from one another for years, and now we are miles apart, having moved about 3 weeks of each other. Miles isn't bad; we still get together a lot; just a sad change :( 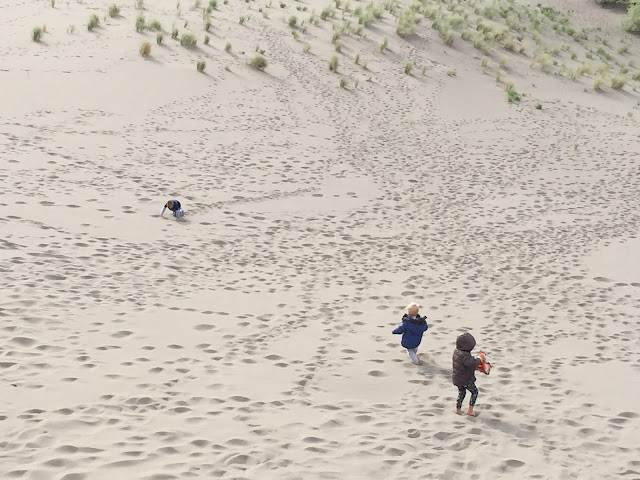 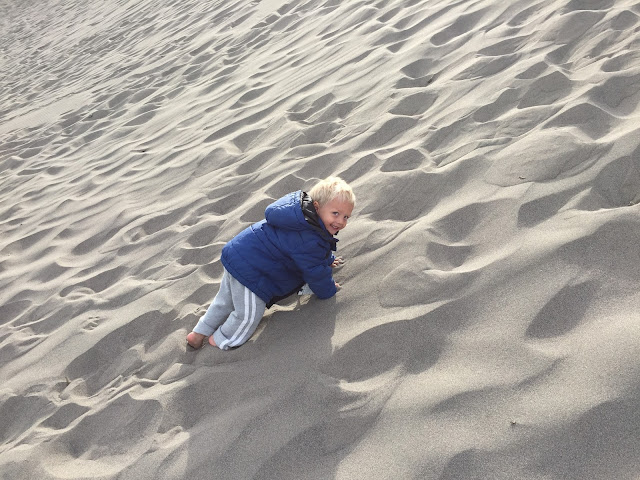 Eric took the boys on our ward's annual Fathers and Sons camping trip in May.  They always go to the Bruno Sand dunes, which Oakley and Birch can't say enough good about.  Here they are with their pals Toby and Tucker. 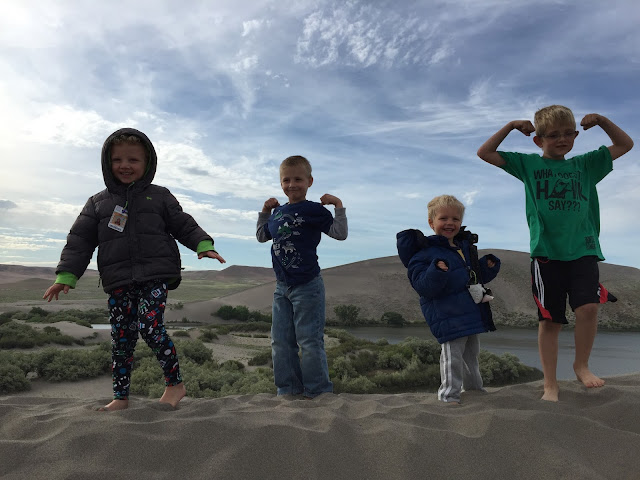 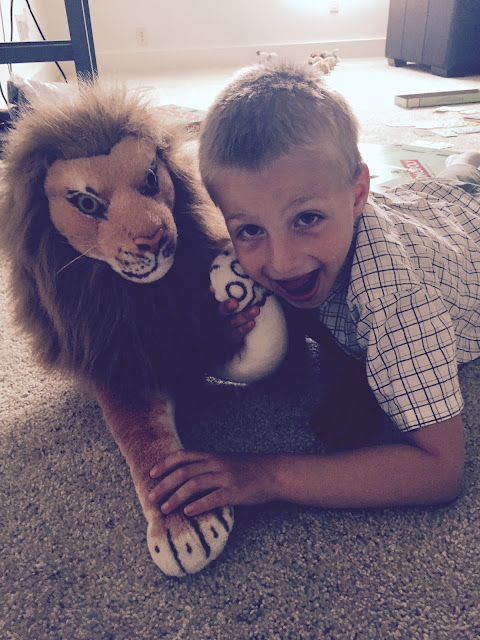 A few months ago Aspen and I went antiquing.  I told her I would buy her something small if she found something she really liked.  After exploring all the goodies the store had to offer, she somehow found this (not antique) stuffed lion and practically fainted with excitement; she just had to have it.  It wasn't exactly the type of item I had hoped she would fall in love with, but for $5 it was fine.  A few days later we found these pictures of the kids with Azland (Eric is reading the Chronicles of Narnia to the kids) on Eric's phone. 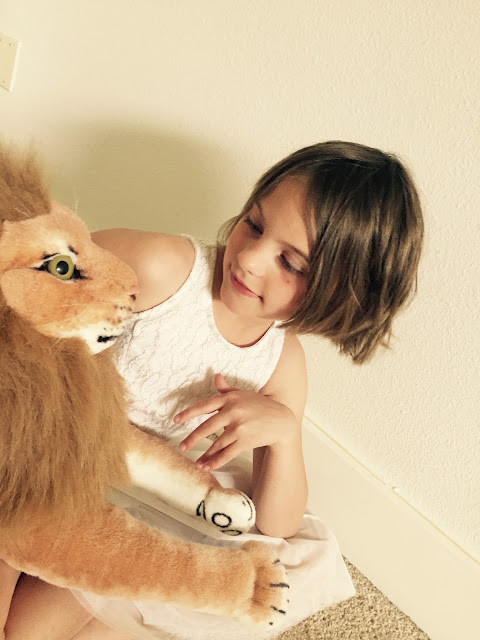 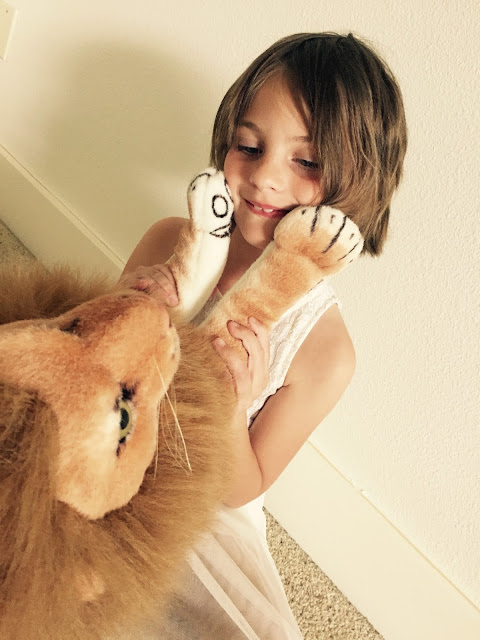 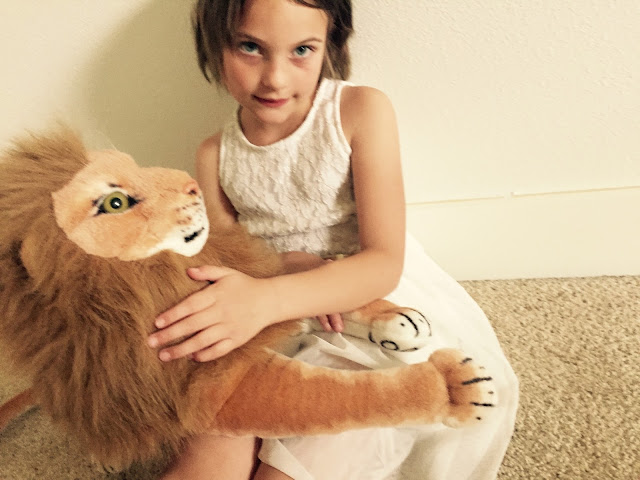 Azland was worth every penny, just for these photos!! ;) 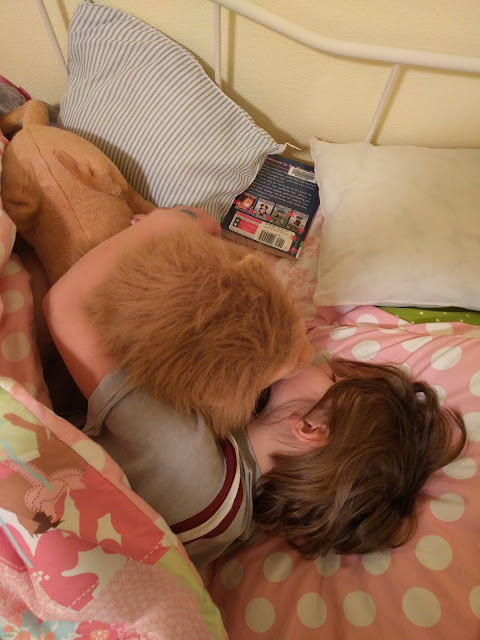 One night Aspen came crying in our room.  She hadn't fallen asleep yet and couldn't find Azland anywhere.  She started to sob that she wouldn't be able to go to sleep if she didn't have him protecting her.  "You'll be fine...." I said.  But Eric got up and searched and searched for Roo's lion.  I joined him, and after 15 minutes we still hadn't found him.   Finally we looked in Oakley's closet and hiding under a box was Aspen's precious protector.  Oakley got a talking to the next morning!
I just have to add that having a large stuffed lion around the house can be alarming, especially in the evenings.  Several times Eric and I will walk into Aspen's room at night to tuck her in and be startled by a looming hairy figure on the bed! 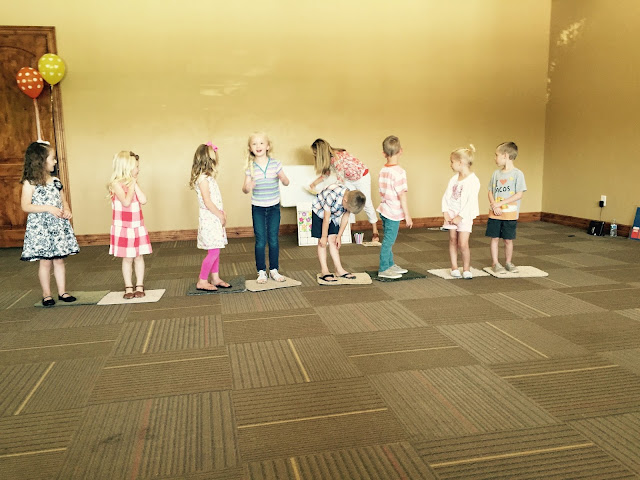 Oakley graduated from preschool in May.  I have to post these pictures (I hope he'll forgive me in the future).  I'm laughing all over again as I write.  Oakley is going through a phase where he gets extremely embarrassed when people are paying too much attention to him.  Just look at him; the whole time he was staring at his feet, as though he had stomach cramps.  He would not look at anyone.  The good thing is no one else seemed to notice, but Eric, Pete, Ami and I were dying the entire time. 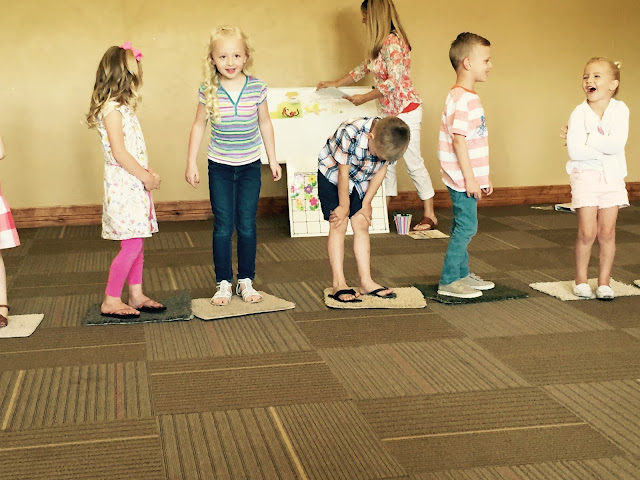 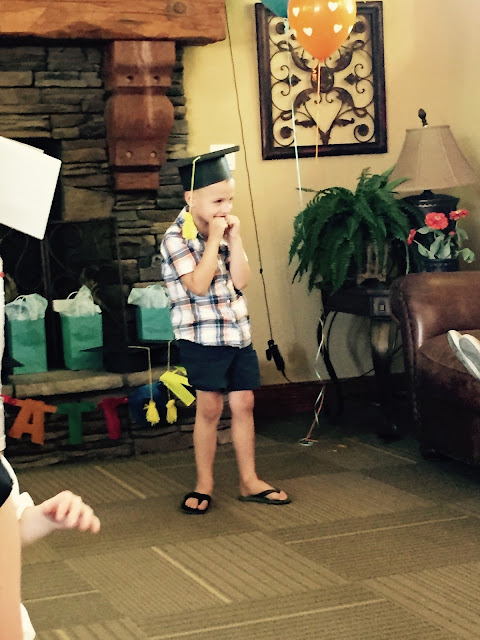 Later on Miss Nicole asked him to come up in front of everyone for a spotlight moment, and this time he held his head up.  An improvement! 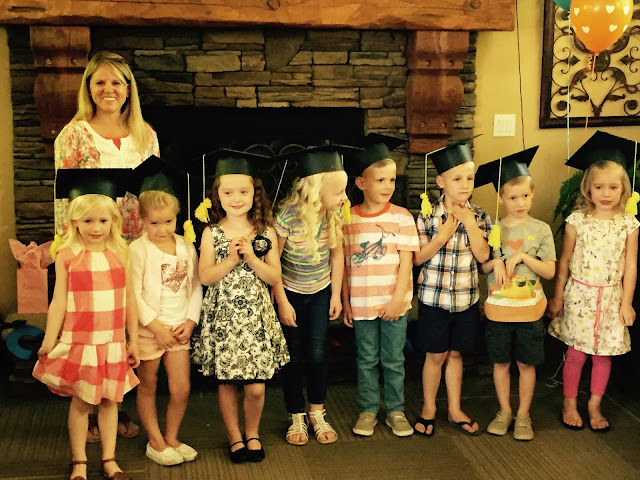 Here he is, head all the way up, facing forward.  Good job, Oakley!!!   ;)  Oakley really loved preschool, and his teacher Miss Nicole.  I loved that it was only two days a week for two hours!  And that he had his own "thing" when Aspen was in school. 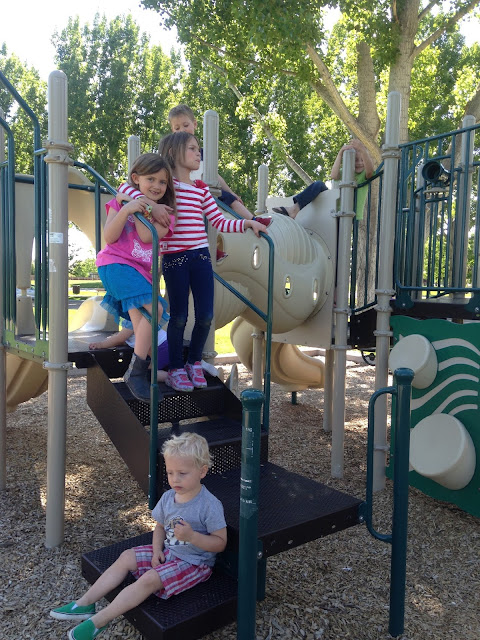 The kids at the park with Brandi's kids, Bailey and Ryker.  Though you can't see Oaks and Ryker so well..... 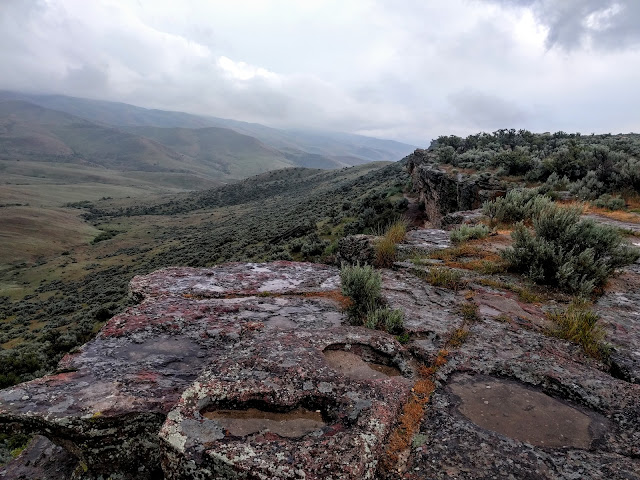 There's a hike in Boise called Table Rock.  I've never hiked it before, but one night when Eric and I were out on a date we had some extra time after dinner and drove up to the top.  I really didn't know much about Table Rock; just that people hike it all the time.  Well when we got to the top I was amazed!  It was so beautiful!!  I'd lived here for seven years and never seen it!  Now I know what all the fuss is about. 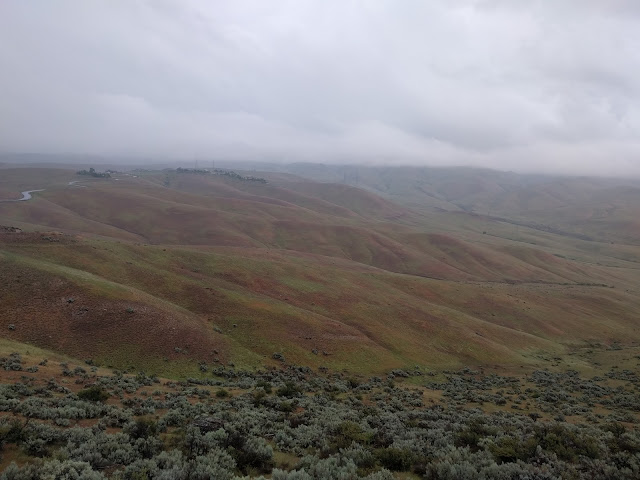 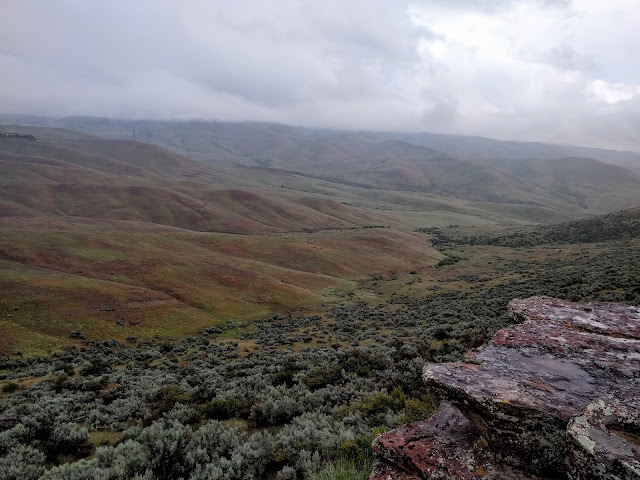 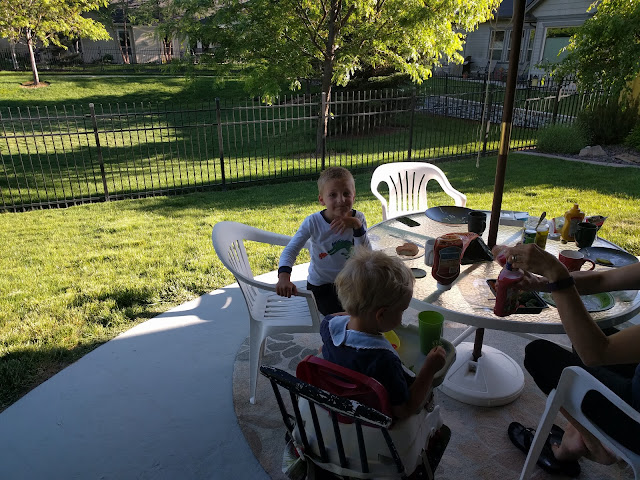 Dinner on the patio
Posted by Chelsi Ritter at 4:09 PM